Remark: No license is required and no charges are incurred when used anywhere in Europe

obsługa właściwości dźwięk wykończenie
Excellent Product!
08.02.2016
I use this wireless in-ear monitor kit every weekend for pub gigs and weddings with my live band. I find them absolutely brilliant. They are the first set of in-ears I have purchased, I didn't want to spend a fortune and decided to try them out as they were great value, I was not disappointed! They work perfectly, I haven't had an issues with them. I can sort out the mix I want pre-gig on our PA and control the volume if needs be on the wireless pack during the gig. The fact that they are wireless is brilliant because I do so much moving around on stage! Everything is very clear and the volume you can get from them is great. I was afraid I'd need them turned up to the last but I don't. They are very easy to use and quick to set up and take down. The ear phones are comfortable to wear, I normally just wear one so I can still hear a bit of the atmosphere.

As a vocalist I find them excellent for maintaining my voice. Because I can hear myself perfectly I am no longer forcing my vocals and straining them. I can play many gigs in a row without losing my voice which was not always the case with wedges.

The only thing I would change about them is the fact that the pack uses batteries rather than just being a rechargeable device like a camera or a phone. But that is a small price to pay for being able to hear yourself perfectly at a gig!

And also worth mentioning before ordering these I had tried out a set of SURE in-ears belong to a friend of mine for one gig just to try in-ears in general. I'm not sure what model they were but they were definitely very expensive! My t.bone's are just as good! Delighted with them! Would definitely encouraging anyone to invest in them!
Przydatne · Nieprzydatne · Zgłoś nadużycie
Zgłoś nadużycie...

obsługa właściwości dźwięk wykończenie
About what I expected for its price
MykeB, 23.04.2018
Reading other reviews and taking into account the price, this system is about what I expected. The earbuds that come with it are pretty poor but just about usable so expect to upgrade these. Sounds great through better quality buds and decent headphones. Tested initially at home and had no real problems even when 30 metres away in the garden, even though the transmitter was behind a solid brick wall and glass patio doors. Tested again at a live gig working maximum 15 metres from the transmitter and did get a few short RF bursts despite changing the channel a couple of times. This was probably due to radio mics being used at a nearby venue. It is a bit of an experiment really, I am a mobile karaoke operator and I am using the system to offer people who have hearing problems more clarity and a better experience than performing with just the sound from the speakers (LD Maui 28's). One person used the option on the night and was over the moon with being able to hear the music and their vocal so clearly, so very promising so far.
Przydatne · Nieprzydatne · Zgłoś nadużycie
Zgłoś nadużycie...

obsługa właściwości dźwięk wykończenie
Very good and affordable
Mubs, 20.04.2015
I bought a few of the t.bone IEM 75's about 6 months ago now and I'm absolutely delighted with them!
They were originally bought for practice, so that a band could rehearse without using a PA system for which they worked like a charm. I have even used them for a few gigs for which they gave me no hassle.
The quality of the ear plugs arent amazing, they kind of sound like they are missing a bit of the top end, but they are really loud. As for the overall sound quality, not 100% clear, there always seems to be a slight hiss, especially if the volume of the sound going into the broadcast box is low, but i didn't find this to be a huge issue, they are definetely usable and are definetwly worth EUR100. We had three of them running at the same time in a very small room and had no problems with interference on different channels. The batteries last a few hours in the receiver, the screen flashes red when the battery is low then you have anything up to an hour before they go completely. The broadcast box feels really sturdy as its made of metal. The receiver on the other hand feels a bit flimsy, especially the little antenna, but as with all things if you take good care of it it won't break. I was pleasantly surprised with the range of them - I had to use the restroom while in a rehearsal studio one day which was a good 200 meters away from the broadcast box and down a few flights of stairs, to my amazement I could still hear my band rehearsing the whole time I was gone.
All in all... very happy with these.
Przydatne · Nieprzydatne · Zgłoś nadużycie
Zgłoś nadużycie...

obsługa właściwości dźwięk wykończenie
Value for money!
Rune Bivrin, 27.01.2014
This is a completely unspectatcular product, in the best possible way. Unpack it, put the batteries in the receiver and off you go. Perfectly good sound and will easily drive any set of hed phones you chose, not just those included in the package.

Also included is a perfectly usable rack mounting kit, complete with the provisions for attaching the antenna to the front.

I haven't tried it in a live setting, but for use in the home studio to not have to trip over wires while moving about. I really like that the power switch is like an old TV on the far left of the volume control. That way it's easy to locate and you don't risk excessive sound levels as you switch it on. 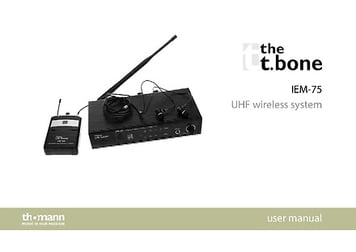 Pokaż wszystkie
In-Ear Monitoring
In-Ear monitoring - reasonable prices since a few years only - a real bliss for any live musician. Why? Find out here.. 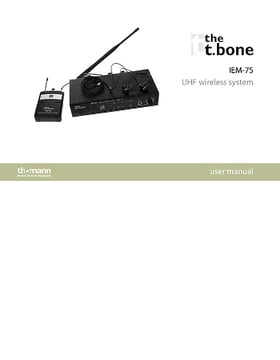