obsługa właściwości dźwięk wykończenie
Rather useful monitors - worth a look
UK Beachboys, 18.07.2014
A couple of days in, and some different things tried, and I really am rather pleased with these. Actually, my technique for research is quite flawed - I didn't notice something in the spec. I saw 15"/1" and missed the 'coax', so it was a surprise to find a 15" dual concentric - didn't make the link (or just missed) coaxial - perhaps because it just didn't click.

So first impressions good.Skimmed through the 26 page manual. As expected nothing useful in there at all. No real specs that mean much.

Sticking some music through it doesn't sound like Tannoy 15" dual-concentrics - to be honest it sounds like typical separate low/hi style boxes with 15" drivers - there's a trough in the frequency response around 250Hz - but it's not deep. There's also a small peak at around 6K.

Most cheaper active boxes tend to have some basic tone controls and mc and line level ability - which was actually in my first need list for this project. The specs don't mention levels at all, so it's line level only. There's enough volume for me to use it for my bass at home - but volume is low. Oddly, the design seems quite good. With the small preset style level control on zero, the unit has a slight hiss - which in a quiet room you can hear standing in front of it - but it's low enough not to annoy. Turning the gain up to full hardly impacts on the hiss at all - which is unusual. With the bass plugged in, it's loud enough for practice, but this is at full gain, and disconnecting the jack from the combo socket was loud! Input and control wise, the combo socket and the gain control is about it. You do have a small switch labelled FOH/MON which seems to just put a small boost in the response at about 2.5K. I prefer the sound with the switch set to monitor - the presence peak sounds less natural to me. There's a stand mounting socket hidden in the recess at the end opposite the input panel, which means if you do use them as main speakers the inputs would be on top?

There's an earth lift switch, and a voltage selector. If you try to overdrive them, there's clearly a limiter which kicks in when the green signal light goes red. When this comes on, it's loud - actually too loud for me to stand in front of, so volume seems sufficient. The low curved shape also means that despite the spec sheet weight of 19.5Kg it feels lighter, and carrying with the fingers in the socket panel recess doesn't cause problems - it feels lighter.

Construction is from MDF, covered with decent black textured paint. Internally there is the main amp circuit board and then another smaller board on the rear of the connector panel. Wiring is neat and tidy, and nothing inside that looks likely to cause problems. It's a Class D amplifier, so there's no mega heavy transformer inside ready to break loose.

I've been using Turbosound 2 X 12" wedges for years, but they are crazily heavy for a smallish box. They also sound rather weedy if I try to play my bass through them, but with these 15" monitors I'm thinking I might just DI the bass and use these on non-IEM gigs. I use IEMs whenever we play on smaller stages because the guitars and keys can't play quietly, but on the festival/arena size stages, they're usually far enough away that their volume isn't a problem. With big stages, my amp and cab also end up far enough away that I need more bass in the mons, so much so that there didn't seem much point even using the amp at the last one, and the rathe nice supplied PA had good 15" monitors - they worked for me, so at the end of the summer, I'll probably replace at least my turbo sound with this, and forget the amp and cabinet.

I didn't expect these to be as nice as this. I guess the downside is damage to the MDF from damage in the van - a case sounds good but frankly a square box will be impossible, while wedge shaped speakers can fit little gaps. I'm glad I spent the few extra quid for these. Perhaps a bit over the top for immediate use, but more useful to me personally afterwards.
Przydatne · Nieprzydatne · Zgłoś nadużycie
Zgłoś nadużycie...

obsługa właściwości dźwięk wykończenie
Bargain
Trolomite, 26.07.2018
I've had 2 of these for 4 years now, and still going strong. Really lightweight but sounds good. Plenty of output, may struggle a little on high demanding situations e.g. very loud band requiring ridiculous levels from the monitors. But even without speaker protection from the desk, these have survived thus far and with the inbuilt clip protection, I'm not as worried about the occasional hot signal sent to these as I know they'll be o.k.
Had many compliments from artists saying how good it sounded on stage. Does need a little graphic e.q to make them sound sweet but nothing major, generally around 2.5k ish if I remember correctly, and somewhere around 400... can't remember right now. Listen for yourself. Even the big four figured priced brands require a little sculpting two!

Low end is not as big as bigger brands but hey, they kick out more than little concentric 12s and give out enough for pretty much all situations.
I've even used these for FOH on small parties and even a wedding (with additional subs). Again, nothing but compliments on sound!
Durability, well you get what you pay for, they're not super solid so you just have to take care with them to make them last.
I'm sure they'll still be going strong for another 4 years at least with a little TLC.
Przydatne · Nieprzydatne · Zgłoś nadużycie
Zgłoś nadużycie...

obsługa właściwości dźwięk wykończenie
useably loud and solid
Stephen5221, 14.11.2017
great monitor and well worth the reasonable price tag, used for live bands rock&pop even heavy rock monitors for both vocal and instrument fold back and have handled everything thrown at them, good feedback resistance and a decent clear sound just a little bass heavy shame no frequency (hi, mid, bass) control does have foh and mon selector button, which does liven the sound a little, setting level dial at about 12o'clock seems to be best to avoid peak, allows for a few high signals, they are loud, well loud enough, they are a bit of a lump ergonomically the all round surround handles on the sides are good and offer some protection to the cable entry .I do tend to carry them upright on end..holding them underneath makes it easier to get through standard doors, you can carry in one hand too if you don't mind waddling !!
They sit solid and also have a good dispersion angle for performers, one niggle is the paint finish comes off quite easy and scuffs and dents soon appear if transported unprotected but then again nothing a bit of matt black paint wont sort out if this bothers you, to me function is more important than finish, overall very pleased with them and receive good compliments from performers using them too ,
Przydatne · Nieprzydatne · Zgłoś nadużycie
Zgłoś nadużycie...

obsługa właściwości dźwięk wykończenie
GREAT BANG FOR THE BUCK
emir music, 17.11.2020
I've been using 2 of these speakers for a year or two now and must say they are really great. No electrical issues, sound is crystal clear and they are fregging LOUD. Loads of connection option, good and sturdy casing, strong front. There is no amplifier overheating whatsoever, so there is no need worry about it crapping out in the middle of the gig.
I am using 2 in a 6x6m room regular in rock/metal band, and they go over Marshall 11 volume :D

The only mechanical issue I found is that the paint is easily scratch-able. So, if used a lot on the gigs/transport, you will have to paint them every year or so. if used in the rehearsal room, you are good for 10-15 years :) and yes, its a bit heavy(duuh its a 15").
Przydatne · Nieprzydatne · Zgłoś nadużycie
Zgłoś nadużycie... 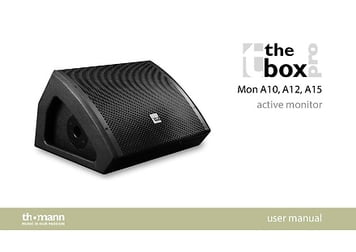 Pokaż wszystkie
PA Speakers
In the digital age, the loudspeaker is the last and unchangeable outpost of analogue technology.
Pokaż wszystkie
Choosing a PA System
Whether youre a fan, a promoter or a performer, the refined craft of live sound is vitally important.
Pokaż wszystkie
User manual
PDF
Podsumowanie:
Przeczytaj test