obsługa właściwości wykończenie
Great value
stej, 22.01.2021
I'm a classical pianist and got this keyboard mainly as a midi controller for orchestral vsti with an option to sketch piano parts without needing to use my main piano controller. And I'm very happy with the purchase.

It's a quality construction and the action is more than adequate for any use. I'm using it now exclusively and haven't felt the need to switch to my stage piano to improve piano part performances.

The control options offered are fantastic, allowing up to 4 channels to be controlled at a time, fully programmable, layered, split or any combination, with different key response and joystick/pedal assignments per channel. You can connect up to 2 switches and another 2 expression pedals, full midi in/out interface with an option to merge the input and send it either to the midi out or usb, all very useful features.

The action itself is a bit sluggish but not in a way that would prohibit fast playing as some reviews claim. I've yet to find something that I can't play on this instrument and I've tried some of the most demanding classical pieces on it. Noise wise, I find it relatively quiet. There is some noise of course, but it's soft and low pitched and not as unpleasant as in most mid-low tier digital piano actions.

A big part of how the action feels comes down to audio feedback and the default tuning is pretty slow for most vsti. Switching to the soft preset or making your own through the accompanying editor reveals a very enjoyable instrument. This is the exact same action used in Keylab 88 and KK S88 after all.

Finally the joysticks. It's like having 3 mod wheels and 3 pitch bends, all programmable. I like that a lot. The springy ones for pitch bend type control are perfectly fine. The free ones for mod control will require some brain adjustment but they're serviceable. Once you adapt to the small movements and minimal force required, they get the job done. It's down to you if you'll end up liking them more than a traditional wheel though; I suspect most people won't.

All in all for the money this is a fantastic piece of kit. 88 hammer action keys with aftertouch, 3 dual axis programmable joysticks, 4 pedal inputs, midi i/o, 4 simultaneously active fully programmable zones per preset, virtually infinite presets and editor software that allows customizing every aspect of the action. So much to like in this instrument. Highly recommended.
Przydatne · Nieprzydatne · Zgłoś nadużycie
Zgłoś nadużycie...

obsługa właściwości wykończenie
Studiologic SL88 Studio - in depth review
Chaz73, 27.03.2017
I bought this primarily for home studio use and for the occasional gig to pair with my Nord Electro 5D. It's a relatively light 88 key weighted controller with an uncluttered layout with a bright, clear colour screen. It's unusual because it has very few programmable controls - so there are no faders or programmable knobs and switches. What you get instead are 3 joysticks - more on this later. It has excellent MIDI and USB connectivity and features 4 connections for foot pedals.

The instrument was very well packed and came with a manual on CD, a PS-100 sustain pedal and a universal power adapter with plug attachments for various countries. The SL88 has a clean uncluttered design with a metal chassis, plastic end cheeks and looks great. The keybed is the Fatar TP/100LR with aftertouch which is the same one Nord uses in the Electro HP. Despite reading a few negative reviews of the TP/100 action I have to say that I like the action, it's close enough to a real piano action for me and is a perfect match for the Nord pianos. It's not too heavy or sluggish compared to the Roland RD64 which has the Ivory Feel-G keybed.

In use I was able to get the right keyboard response just using the preset velocity curves. There are another 6 user setups. This is programmed using the SL88 editor which installed and ran with no problems. You can also adjust the key balance of each note independently and the key balance between black and white keys - so you can have a lighter touch on the back keys and heavier on the white. I suspect this might be similar to the software Nord use when setting up their keyboards.

At first the supplied SL88 software seemed the best way to edit the controller but there are some features that need to be improved. On the Global/MIDI setup page you have to manually select the USB port to connect with the SL88 - it does not auto sense that it's there. You then discover there are 2 USB ports for the SL88 and you must connect to port 2, nothing in the manual about this. This setting is not stored and you have to set it up every time you start the editor. It is very quick to program the four zones except for the key zones which can only be changed using the on screen knob. It should be possible to play a key to set upper and lower limits! Syncing your setups could also be improved as you have to transfer and save them to the computer first, then sync them back. You can't simply edit the setups you have copied from the the SL88. You can't even rename your setups - you have to edit them, then drag and drop using organise then re-sync them with the hardware. I gave up with the software and now do everything 'live' on the SL88. So big thumbs down unless they update it.

OK then so what it's like editing the SL88 directly? In a word, counter-intuitive - er that's two words. Even though there are only 3 main buttons I found I was always pressing the wrong one. There is also a button on the entry data entry stick but it is not that obvious what it does at first. Now it might just be me but I have no problems getting around a Nord Electro or even a MOXF. I am pleased to say the having stuck with it for 2 weeks I can program setups very quickly but it was very frustrating at first. It still amazes me that you can't program key zones by pressing a key on the keyboard but the colour screen helps.

The 3 joysticks (which are small) are completely programmable per patch but many players will miss the standard pitch and mod wheels. They have tried to make them as flexible as possible by having fully sprung, half sprung and not sprung at all. However, in practice the fully sprung one is best used like the Roland Bender - which means you can't leave the Mod (Y-axis) in the sweet spot. So you might decide to use Mod (controller 1) on the second joystick but I found as this is sprung along the X-axis and has a tendency to jump back to the centre position unless you are very careful. The unsprung stick is excellent if you need to control an X/Y pad like the vector control on a Wavestation.

And finally, to the connections on the back of the instrument. There are 4 sockets that take a range of foot switches and pedals. The switch inputs are auto sensing but you must plug them in before you switch on. I had no problems with a Yamaha FC-7 and an M-Audio EX-P expression pedals in input 3. Input 4 is universal and can be used for a triple pedal. Each zone can be set up to respond or ignore these inputs. The MIDI setup is interesting as there is a MIDI input which can merge incoming data and send it to one, but only one of the four zones - would have been useful to be able to merge this to 2 or more zones at once. Standard messages such as volume, program and bank changes are easy to setup and each zone can be programmed to output to either USB, MIDI 1 or MIDI 2.

obsługa właściwości wykończenie
Grymt, 10.05.2020
I was looking for an 88 keys midi masterkeyboard with a piano feel, that wouldn't make too much noise. I use it for my DAW (Reaper), to compose music with VST's. I'm not a well trained pianist, but took lessons for 3 years and I know how a piano feels. And if I could choose again, I would have made a different choise.

The SL88 is sort of OK.
I own a piano, and the SL doesn't play like a piano at all, but other keyboards that I tried felt the same or worse. I didn't try the most expensive ones though, such as a Doepfer or Kawai.

The keys are a bit hard and muddy to press at first, just like the Arturia Keylab 88 (still MKi back then). Same Fatar TP/100 LR keybed. But after even a few days of playing the resistance is going down considerally. Alas, the noise becomes much bigger as well. After a year of playing, I can hear and feel where my hand is, in the dark and without switching the power on: the lowest keys still have a bit of resistance, and they're much more quiet. None are as noisey as my old M-audio Code49 though.

I doubted a lot back then between the Arturia, which had a few problems with Dead On Arrivals according to the reviews, and the SL88. I've got a bit of regret. I really miss having a pitch and modulation wheel. The tiny joysticks on the SL88 are quite useless: you can never give any nuance to for instance the vibrato of a violin with such a small travel.

I bought a second hand BCF2000 with 100 mm faders to do that now, and a Native Instruments Maschine MK3 for the pads. So with the Arturia, twice the price of the SL88, I would have spend much less money, and also I'm still not sure where to park all this equipment.

My old footswitch doesn't work on the SL, as Studiologic wants you to buy theirs for extra $$. I hate that. Oh, if you want faders, you can get Studiologics SL Mixface, but don't do that. You can't assign any new CC number to those faders, which in my mind is the only reason why you would buy such a thing. They don't seem to have any idea of what their users want, apart from having okayish keys for a low price.

Still, not everything is bad. You can set sensitivity of the keys, there's aftertouch, it's cheap, the build is not bad apart from being a bit noisey, and nothing broke so far. Or did it? I've got a problem with double midi notes being sent, that I could only solve by switching off one of the triple sensortechnology...

It's such a pity I can't control my DAW with my 120 year old piano. The SL keys are much slower than my standing piano's, they feel plastic, you really need to hammer to get more then just a low volume, and they make much more noise when playing softly then the old piano, that has much and much more dynamic.

But at least you don't have to tune this one, and my old piano, well, sadly it's too old to tune, and my piano tuner gave up on it. 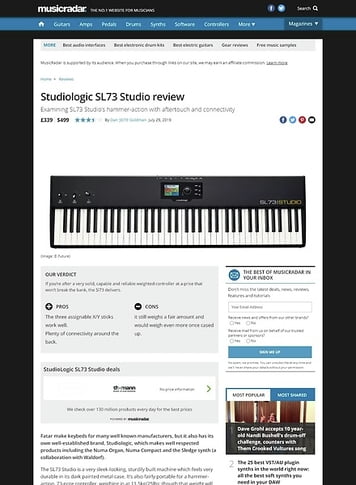 Controllers
These days, musicians are experiencing the increasing complexity of their instruments and devices at first hand - regain some of the control you've lost!
Darmowe pobieranie 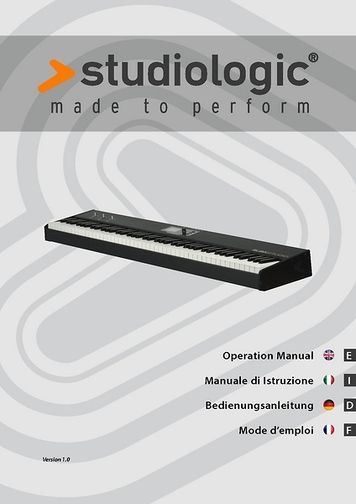 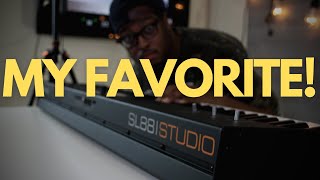 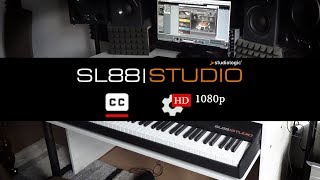 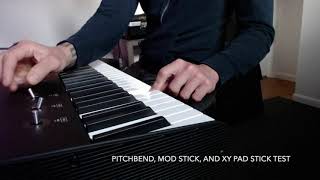 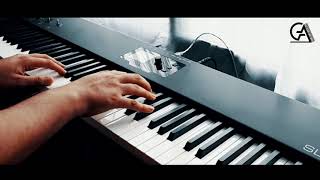 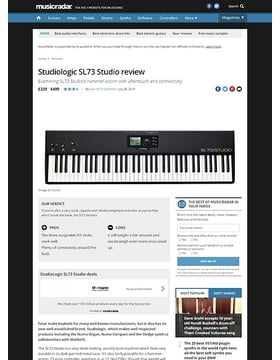 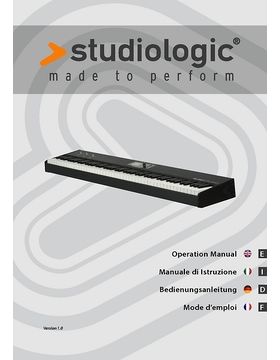