obsługa właściwości dźwięk wykończenie
Herms, 23.05.2020
I play bass, and I have tried a quite a few of the popular cheaper IEM transmitters in the £200-£250 price range. My big problem with them all was the lack of low end in my IEMs - I use KZ AS10 in-ears which are good sounding full range monitors. Generally the cheaper transmitters only go down to the 50Hz or 60HZ area which doesn't make a bass loving bass player very happy.
I did some more research and found out that this unit does 30Hz to 12kHz. Although it cost just over £400, around double what I originally wanted to spend, I bought it as one last attempt to get some decent low end. It was a good choice.
I've had a year of use out of it so far and I'm really happy with it. I'm sure if I spent 3 times the ammount I could get an even better sound with more features, but I'm more than satisfied with this unit. I'd say compared to my in-ears hard wired with A Behringer P2, this wireless gives me 95% of my low end, and that's pretty good for this price range. You'd have to spend a lot more money to get that 5% extra, and I don't see that as cost effective.
If you plan on using units like this a lot, I recommend you buy some rechargeable batteries & a charger. That'll save you money in the long run. One battery last for many hours, but put a fresh one in for every gig so you don't ever run out of juice and look really stupid in front of your band mates.
Be aware that this is a MONO unit. Not stereo. It runs dual mono via the 2 inputs - a nice feature as you have two separate channels & volume controls, very easy to adjust on the fly at a gig. (Read the manual for more info on this neat feature) If you want stereo you better be prepared to spend over £700 on the PSM300 or equivalent. Personally I've never had an issue mixing in mono, todays digital mixer apps are more than capable of giving great mixes, even better if you can do your own mix with a tablet/phone.
There is a built in limiter in the belt pack that can't be turned off. To avoid hearing it 'squash' the sound all the time you will learn to back off the volume on the transmitter. I set mine to about 25%. I run the belt pack at 50% volume. Then I control my overall volume via my aux. This gives me a great sound with no limiting. Obviously, watch your volume levels as it's easy to get loud which will damage your hearing in the long run.
There are rack mounting brackets included in the box too which is a nice touch, not all brands supply these as standard.
For drummers & bass players especially, but anybody who wants to hear a full range sound with a decent low end, this wireless will do the job.
Przydatne · Nieprzydatne · Zgłoś nadużycie
Zgłoś nadużycie...

obsługa właściwości dźwięk wykończenie
Not legal frequency ranges for eu
Ally, 02.06.2017
Despite what the box says. These are illegal to use in most us countries. I was sold old stock. They sound great, are very handy but not happy about the frequency choices online.
Przydatne · Nieprzydatne · Zgłoś nadużycie
Zgłoś nadużycie...

obsługa właściwości dźwięk wykończenie
Nice device
Aigars K., 07.03.2018
Nice wireless monitoring system, working great, no problems experienced. I have used it at small acoustic gigs and full club stages and no complaints. Easy to use, sound is good.
Only thing - I don't like the stock earphones, I recommend switch those to Shure SE215.
Before buying check the legal frequencies, which you can use in your country.
Przydatne · Nieprzydatne · Zgłoś nadużycie
Zgłoś nadużycie...

In-Ear Monitoring
In-Ear monitoring - reasonable prices since a few years only - a real bliss for any live musician. Why? Find out here..
Przydatne akcesoria 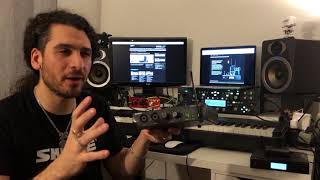 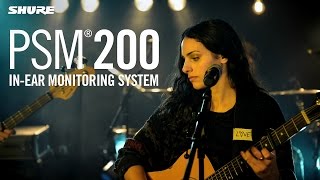