właściwości dźwięk wykończenie
Versatile and high-quality
LennertK, 08.09.2019
I use this microphone for both video and audio work, mostly as a boom mic or on-camera in run-and-gun situations where I still want cleaner audio than what I get with the built-in microphone on the camera.
I love the fact that I can use it with an internal battery yet also supply phantom power when available, it allows me to use the mics built-in pre-amp on a small DSLR that has poor pre-amps yet bypass the internal circuitry when connected to a mixing desk or a field recorder that has great pre-amps.

This allows me to use it in many more situations than for example a Rode Videomic Pro that really only works well with small cameras, or a MKH416 on the other end of the spectrum where you would not want to plug it into a small camera. This boy can do both, and does it gracefully. Of course, if you're really only going to use it with a camera you might be better off using a specialised on-camera mic while if you're only going to use it with a mixer/fieldrecorder that will supply the phantom power you might be more interested in a different mic (although I really like the characteristics even when ignoring the whole battery part).
I've even used it to mic a guitar amp cabinet while the drums were playing with about 0,5m of space in between but I placed the mic at a 90 angle from the drums with the low-cut on and the recording was almost completely clean.
I've never had it shut down on me unexpectedly because the low battery warning comes in well before it actually runs out. Talking about battery life, it is amazing. One battery lasts for days and since it's only one cell you can just have a reserve ready in the carrying pouch at all times.

The thing I actually don't like as much is the coldshoe-shockmount that is included in the box. It only has a camera screw at the bottom, not a microphone stand screw which, while I can see the reasoning behind it, still doesn't make a lot of sense to me because it's much easier to adapt from mic screw to cam screw than the other way around. The shock absorbing mechanism also doesn't seem to do that much in terms of shock absorption (it probably does help agains very small shaking and small movement, just not against when you bump into the stand for example) but it does keep the microphone locked very tightly which is nice.

All in all that's a very minor complaint. The mic clamp isn't really that bad and you can buy your own that holds it with elastic bands if you feel that's necessary. Considering the quality and versatility the MKE 600 gives you this should not be holding you back.
Przydatne · Nieprzydatne · Zgłoś nadużycie
Zgłoś nadużycie...

właściwości dźwięk wykończenie
Superb for interviews and even singing
GregAB, 24.02.2020
We are using the MKE 600 on a boom stand about 12-20 inches from the interviewee (the mic is off camera). The quality is superb. We also have a countryman lapel mic and in an A/B test it is difficult to tell the difference - though the MKE has the added advantage of no handling noise. Highly recommended.
Przydatne · Nieprzydatne · Zgłoś nadużycie
Zgłoś nadużycie... 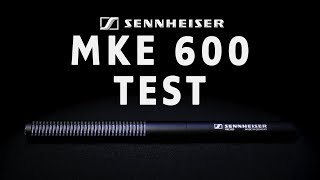 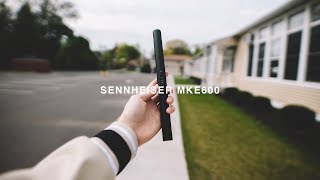 Pokaż wszystkie
Small Diaphragm Mics
Read on and learn all you should know about small diaphragm mics
Pokaż wszystkie
Recording Choirs
Recording choir music is always a challenge, even though it might not seem to be at first.
Podsumowanie:
Przeczytaj test