dźwięk wykończenie
Just the Best!
28.01.2016
I've been playing drums for about 8 years now, on and off recently since I've been in college. I have tried almost every head on the market and I just really have gotten the best sound out of my toms with these Remos. I started playing on a Tama Stagestar kit when I was 10 or 11, made of poplar wood, not great sounding but I was just starting out. I was a huge RUSH fan and Neil was my main influence, he used DW drums, Sabian cymbals and Remo drumheads... Needless to say I couldn't afford DW drums nor was I experienced enough to really warrant that kind of investment of money into a kit. However, I could afford Sabian cymbals and Remo heads; I bought myself some Remo Clear Ambassadors and with the poplar wood they sounded, well, not much different than the stock heads. They, like the stock heads, produced an overtone that wasn't easy on the ears. I then decided to get something that would kill those overtones and so I bought Aquarian Performance II heads, not only did they have a ring built in to dampen overtones but they were two ply which really made them last (as a kid I played hard and my drums were really angled towards my and thus the impact of the sticks kind of cut into the heads and dented them). After buying more add on drums and roto toms and everything I could so that I could be as much like Neil as possible I figured that it was time to upgrade my kit. It got to the point where in my attempt to kill overtones I just ended up having drums that sounded like you were hitting a pillow; poplar just doesn't resonate very well at all. So after about 4 years I bought a Gretsch Catalina Ash Series kit. The stock heads were clear single-ply Gretsch heads. I threw some Aquarian Studio rings on them, as they had a little overtone and they sung beautifully; they were crisp and bright and had very good resonance (ash wood resonates at very high frequencies, higher than maple; not sure about birch) and just sounded an entire league above my starter Tama kit. I put Remo Clear Ambassadors on that kit and never changed them for the three years I played that kit (they never broke on me either). Just last year I bought a Mapex Orion Classic Series kit, this was and still is my top of the line kit that I record with and play most. I wanted to try something different and so I equipped it with Evans G2 coated (I always like the look of coated heads and wanted to see what 2 ply would sound like on maple as opposed to Ash and Poplar). The kit did sound good, I thought though, for how much I paid, that it should sound better. Last time I was home I decided to swap the Remo Clear Ambassadors from my Gretsch with the Evans G2 Coated on my Mapex. OH-MY-GOODNESS!!! The Mapex set just escalated to a whole new level of sound!!!! It was the best sounding kit I've ever heard! The drums were boomy and had such presence, they were warm and crisp and bright at the same time and they resonated and just sounded absolutely fantastic!!! Still, as with every kit I've ever played there is always going to be a little overtone; I decided that I didn't want to risk killing the bright full resonance of the drums with a ring so I got some moon-gels and threw them on the drums and they let the drums just sing the sweetest tone ever! (Needless to say the G2 coated didn't sound so good on the Grestch) ... here's the kicker, I played for about two weeks when my 12" Remo head cracked, I was bummed but remembered that I had played those heads for about 4 years by the time it cracked. I went to the store to by brand new heads for all the drums on my Mapex kit but they didn't have all the diameters I needed so I bought Evans G1 hoping to get a similar sound. Don't get me wrong, they sound good, but they're ridiculously difficult to tune and they don't resonate as long and aren't as bright, they're just a step below the Remo Ambassadors. When I get the chance you can bet I'll be putting the Remo clear ambassadors back on my Mapex set because, after 8 years, they're just the best sounding heads I've played.
Przydatne · Nieprzydatne · Zgłoś nadużycie
Zgłoś nadużycie...

dźwięk wykończenie
Great
Jakob T, 15.06.2018
I use this head as a resonant head and the result is amazing and i'm really pleased with it.
I really recommend it!
Przydatne · Nieprzydatne · Zgłoś nadużycie
Zgłoś nadużycie... 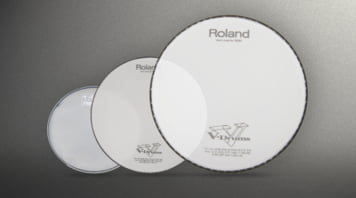