dźwięk wykończenie
First Time Flatwound User
GF. Big, 22.02.2019
It took me a little time to get used to these strings, but now that I have, I have no doubt that these will be my 'go-to' strings for my Gretsch G5422G-12.

First, while tuning up for the first time on my Gretsch G5422G-12, the A octave string broke. No single flatwounds seem to be available, unless I've missed something.
Second, there is a significant increase in tension in comparison to roundwounds. At first, I wasn't sure how my left hand would react to them, but after a couple of weeks of fairly extensive use, I am pleased to report that I no longer find it much of an effort to fret chords, and play runs up and down the neck. Indeed, they have a smoothness that roundwounds lack.

First: the sound is a lot clearer, more focused, in comparison to roundwounds. I was surprised by this. I've read that the main strings are 'mellow' sounding, but, to me, they sound dull. However, within the context of the octave strings, they fit perfectly, and the sound is exactly what I had hoped for.
Second: the extra tension helps tuning stability up the neck. No intonation wobbles up the neck, which happens with roundwounds.
Third: the tuning stays quite stable, even after not playing them for a day or so. Very pleased on that account.

Bottom line is, I love the sound, and the intonation stability up the neck (N.B., my Gretsch was setup perfectly by a Meistergitarrenbauer, the action is very low). If the octave A string hadn't have broken when I first tuned up, I would've given these strings 5s across the board.
Przydatne · Nieprzydatne · Zgłoś nadużycie
Zgłoś nadużycie...

dźwięk wykończenie
Great sounding, but poor quality in comparison with other Pyramid strings
Paul599, 17.01.2020
These are wonderful sounding strings, sadly let down by poor quality which is unusual from Pyramid. For such an expensive set of strings, you espect the quality to match the prince but sadly not in this case.

I've had three sets of these, the first was fine - the second (like another reviewer on here) snapped the A octave string (wound 19) on first tuning. Unfortunately, Pyramid / Thomann don't seem to supply single replacement flatwound strings, so I had to substitute from another manufacturer who did (Thomastik).

I recently restring with the 3rd set, and once again the A octave snapped. It was snapping mid way along the string, and the windings had unravelled. This time, I decided to contact Pyramid directly, who kindly sent me two 0.19 flatwounds out of courtesy. The first snapped on install at the tuner, the second snapped half way again.

Whlist I've had zero quality issues with Pyramid's other offerings, these sadly don't meet those same standards. They weren't a 'bad batch' as all the sets were sourced at different times - it seems the wound 19 isn't up for being an A octave.

dźwięk wykończenie
The only strings you'll ever need for a Rickenbacker!
acra1g, 09.04.2018
I needed to replace the strings on my Ricky 12 string guitar and was looking at the various manufacturers who produced such sets. I've tried a few other string brands but after a bit of research found that the Pyramids are the de-facto strings for a Rickenbacker. Previously I found that nickel-wound strings were a little 'zingy' but using the flat-wounds gives you that Rickenbacker jangly tone that you hear on records etc.

I'll be using flat-wounds from onwards. Yes, they are a little more expensive but I can assure you that they will be worth it!
Przydatne · Nieprzydatne · Zgłoś nadużycie
Zgłoś nadużycie...

dźwięk wykończenie
Fantastic!
01.06.2015
Been looking for a set of these for months! if you have an electric 12 string guitar you need these strings! The harsh bright sounds of the octave strings on an electric 12 can easily be removed with these strings, warm, smooth and still have the perfect amount of jangle! the strings didn't take long to settle and if they're anything like my flat wound bass strings they will last forever as well! I cannot see me ever using a different brand in my life! the next time I order I will be stocking up on these without a doubt!
Przydatne · Nieprzydatne · Zgłoś nadużycie
Zgłoś nadużycie... 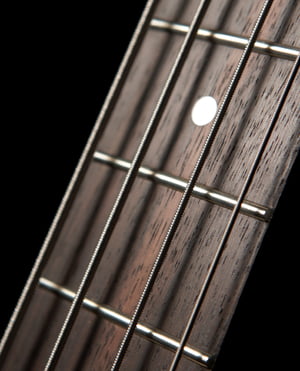