dźwięk wykończenie
NS Design NXT5 cello: first impressions
Marko159, 13.09.2013
Everything was very neatly packed and arrived without a scratch. The instrument looks gorgeous. It's way smaller than acoustic cellos, and also way smaller than most electric ones I have seen. The craftsmanship looks flawless. It's manufactured in Czech Republic, by the way. The instrument comes bundled with a tripod stand and I also got the frame strap system for it (separate review on that one). The bridge height in this instrument is adjustable via two screws through the body and the neck has a truss rod like on electric guitars and basses. The tuners seem to be standard guitar tuners, which is a huge improvement over traditional cello tuners! They have 12:1 ratio and while not the most accurate tuners out there, they make my life way easier and there is no need for extra fine tuners that most cellos have.

First I tried just the playing feel of the instrument without amplification. The 5th string becomes natural to use very fast and doesn't take much adjustment. I read somewhere that on 6-string models it is hard to avoid hitting adjacent strings when applying heavier bow pressure but that is definitely not the case here. The strings are relatively close to fingerboard which makes the instrument very easy to play. With acoustic instrument one might want to have higher action but here I haven't found any reason why I would want to raise the bridge.

The hard part comes from the lack of any traditional contact points that cellos usually have. The neck has a small pin under it, marking the 1st finger in 4th position. This I find somewhat odd as in my opinion it should be on 2nd finger mark as that's where my thumb is when playing in 4th position. Consequently I find I'm staring at the fingerboard all the time while playing, just to know where I'm going. This will probably pass with time, though. Luckily the fingerboard does have similar dot markings that guitar and bass fretboards also have. I'm sure purists would complain about it but the added benefit of those dots is improved intonation, so it's definitely worth it to have them there.

The tripod stand feels a bit fiddly and the whole thing is shaking and moving when doing vibrato. Experimenting with different playing positions I found a somewhat good setting but it still isn't quite optimal and I tend to keep my feet on the feet of the stand just to stabilize it. When using the floor effects pedal that's obviously not an option. NS Design also have a (sort of) traditional kind of endpin system available and I might end up getting one at some point as well. Playing on tripod gets easier if you align it so that one of the feet is perpendicular to the angle of the neck.

So, how does this thing actually sound? Just awesome! Big gripe I have with most electric cellos is the phasey sound that gets really ugly when doubled. The NXT has none of that. I tried recording some stuff on Cubase and I found I can build sections without getting phasing. Like with any electric cello, added reverb is important. The piezo microphone sounds very smooth and has very even frequency response. There are knobs for volume and tone. The volume knob has something they call JackPot, which is basically an on/off switch for the circuit so you can take it out of the equation completely. The tone knob has very wide range and even with passive electronics, its effect to the sound is much more obvious than on most guitars. I find I prefer it set somewhere below middle. Fully open the sound gets more nasal but the range of sounds available is very large and should suffice in most applications. There is also a switch for arco/pizzicato mode. Basically it determines if the piezo microphone should respond to horizontal vibrations (like when bowing) or vertical (traditional pizzicato). I find the pizzicato mode gives a very long sustain, way longer than what is usually heard on cello pizzicatos. Thus I prefer to use it more as a special effect and do my pizzicatos using the arco setting for more "plucky" sound.

TL;DR: All in all I'm very happy with my purchase. The sound is gorgeous, it's well built and it's very light to play and handle. My only gripes have to do with the somewhat unstable feeling support systems.
Przydatne · Nieprzydatne · Zgłoś nadużycie
Zgłoś nadużycie...

dźwięk wykończenie
I am smitten...
13.11.2014
Firstly it should be stated that I am NOT an accomplished cellist. I got a cello to see if I would enjoy it and I did except for two irritations: the static nature of playing the instrument and the infuriating tuning rigmarole. I had so much trouble tuning my old, second hand, pretty cheap instrument it often fell by the wayside in favour of other instruments I play.
Once I saw the NS series, with it's machine head tuners and optional strap system, I was hooked.

Once I got it out and started playing it I was infatuated.

Upon tearing apart the packaging to get at my new toy (standard excellent packaging from Thomann) I had the instrument tuned and ready to go in under three minutes. Would have been less but I took a few extra seconds to drink in its awesome looks!

Almost instantly I found the playing of it to be so far superior to my previous cello. The neck is nice and round and the finish has no "stickiness" that some instruments have, I could glide up and down the fingerboard effortlessly.

I've read some reviews that say this doesn't sound as good as an actual cello; well, no, it probably doesn't but what it does do is sound amazing with effects! Distortion, filters, phasers, delays all sound amazing with the NS, especially when coupled with a good preamp (K&K in my case), plus I'm addicted to the haunting sound of it with a touch of reverb.

I'm lucky enough to be part of a very understanding band that runs my local open mic night who have no objections to me turning up with any weird and wonderful acquisition and last night I played it through a PA for the first time and it sounded immense! I received some lovely compliments- even a few on my playing, to which I credit the NS fully!!

The dot markers on the neck may be labelled cheating by some but, to me, they are proving invaluable to improving my intonation and overall playing.

The only note of caution I would sound is that the NS does NOT come with a bow.

dźwięk wykończenie
Great for practice, not so much for sound
Tom P. 559, 15.05.2013
An electric cello is never going to sound as good as an acoustic cello.

Please don't think you are going to get a sound with as much body or oomph as a real cello.

However, I find as a composer it is much easier to pick up and throw around the NS Cello than unpacking and playing my expensive acoustic, also meaning it's much likely to get damaged in the studio.

It sounds great through FX plugins, and it's great for an eerie "eastern" nasal sound. You will not fool anyone who has heard a cello though.

Build quality is fantastic, it's built to last.

Get a good bow with it, and some decent rosin. As ALL the sound is directly picked up from the strings / bridge pickup, it makes a big difference to the sound. 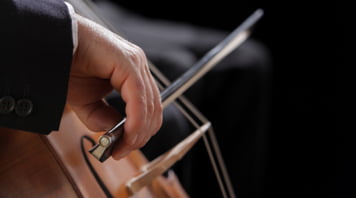 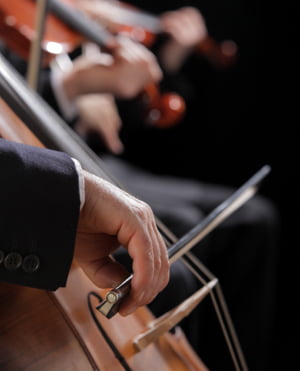