obsługa właściwości dźwięk wykończenie
Mesa Boogie Mark V 25
Bill Joseph, 14.09.2018
An amp suitable for all styles, deceptively loud.
The D.I. Cab Clone XLR out to any desk/mixer makes it so much easier to use as miking the cab is not necessary.

The tonal possibilities are really impressive with two possible Clean Channels, one being ideal for Funk/Country with the other Fat setting warming everything up and generally giving a fuller sound.
The Crunch setting is nothing less than amazing!

The 6 modes all sound excellent as they are, with even more tonal options to be had from the 5 Band E.Q. however, the mid range frequencies I found more or less impossible to completely dial out
and due to the obvious differences in Pickups, every guitar will therefore sound very different and will require a completely new tonal setting.
The E.Q. tends to thin out the sound though it is always crystal clear.

The reverb levels are set on the back (not foot switchable on the 25) and the reverb, though a little on the short side regarding sustain is absolutely ok and a good Spring representation.

The amps serial effects loop is excellent with pedals and the general tone is absolutely unaffected.
It is perfectly made and super lightweight, comes with a cover and Mesa even thought to include felt pads to protect the cab it stands on from being marked!
And this considering the light weight too!
The Manual which covers every aspect is thorough and very helpful.

With Mesa Boogie you are guaranteed more or less perfect quality with every amp going through the now famous 'hammer test'.
They are thoroughly and carefully assembled and known to be absolutely reliable.
Not particularly complex as far as features go, though this Mark V little brother will require patience and practice to find that illusive 'Holy Grail of Tone' we are all looking for.
It is almost certainly hidden in there somewhere!

obsługa właściwości dźwięk wykończenie
Nothing Compares.
Jonathan8593, 02.05.2015
This has to be one of the best and greatest guitar amplifiers ever made and I have owned a lot, Orange, Peavey, Vox, Marshall, Roland and several Mesa Boogie's. The tone is to die for albeit slightly thinner than my Dual Rectifier but then even most 100 watt heads are. This head had an enormous role to fill particularly as I took the brave decision to buy the Rectifier 1x12 straight cab to compliment it. How did it perform in the studio and on stage with my band? It passed with flying colours, seriously good tone and punchy with a surprisingly good amount of bottom end. The guitar really cut through the mix. My band mates were blown away and really liked the clear sound it produced. Very easy to get a good tone from too. Do I still prefer my Dural Rectifier for bone crushing tone? Yes. Will I be using the Mark V 25 live from now on? Yes. It is so good that I am willing to keep my Dual Rectifier at home. The sound it produces ranges from really clear cleans, blues, classic rock, classic 80s metal through to jaw dropping modern metal, it is mind blowing how Mr Smith crammed so much awesome tone into such a small head. Yes, it is expensive but you really get a lot for your money. I can't think of any other amp in this category that compares its that simple. Also, it weighs less than 8Kgs. I watched the John Petrucci play through video on Youtube and was convinced it was the right amp head to get for playing live.
Przydatne · Nieprzydatne · Zgłoś nadużycie
Zgłoś nadużycie... 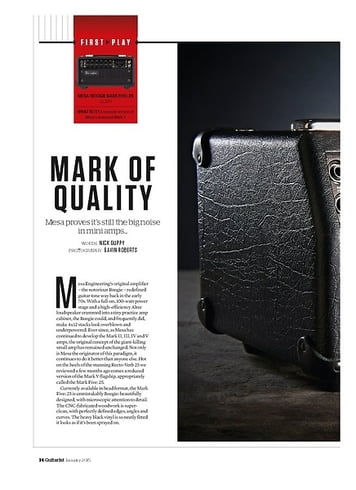 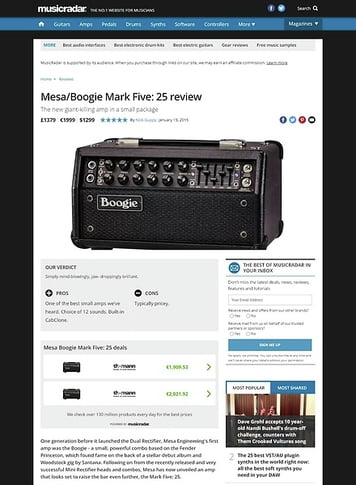 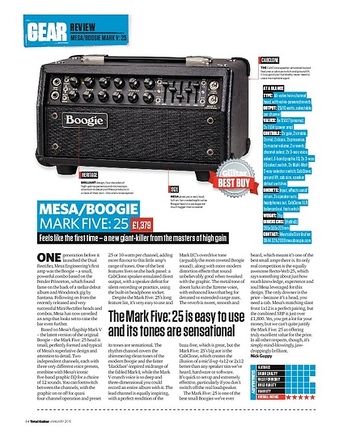 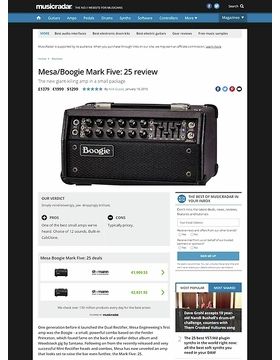 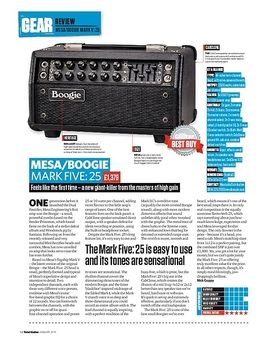 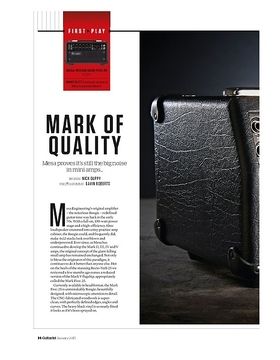