obsługa właściwości dźwięk wykończenie
JBL Eon One
24.07.2016
I'm a professional singer so wanted something portable with a quality sound for more intimate gigs. After months of research I decided on the new JBL Eon One. It certainly is portable and does away with carrying speakers, amp, stands and associated cables etc. The sound is clean and crisp with good lows and highs. I've been using a friend's Bose L1 and I have to say that the sound is considerably cleaner and, well, just better! The 2 x mono mic/line inputs have a bass, treble and reverb control and although the reverb is fine, I may decide to use an external mixer/effects going forward as I do like to have a little more control over vocal effects. The stereo channels are fine but there's no bass/mid/treble controls- so if you're using backing tracks via an iPad or minidisc you either play it flat or, like me, use an app mixer for the iPad, again just if you want more control. The Bluetooth is a good addition as it frees up a stereo channel if you need one for a keyboard etc.

Cons - basic mixer, no mixer on stereo channels so may want to add an external mixer, rear grill got a bit hot but was in use for 8 hours.

Overall I'd certainly recommend this to anyone considering this kind of portable PA system. In my opinion it sounds better than the L1 compact and LDs Maui 28 (both of which I've had on loan). Time will tell on its durability.
Przydatne · Nieprzydatne · Zgłoś nadużycie
Zgłoś nadużycie...

obsługa właściwości dźwięk wykończenie
Exactly What I Wanted
KMickP, 01.01.2018
I was looking for a compact PA with good quality sound. I am a singer songwriter, I play acoustic guitar and use my own backing tracks which consist of mainly bass & drums, so good solid low frequency delivery is vital as are crisp, clear highs & mid to accentuate the vocals and acoustic guitar. The Eon One delivers. I had contacted the Thomann PA guys, told them what I was looking for and the products I was considering after quite a bit of research, they quickly got back to me and said that given the info I had given them, the JBL would be te best fit for me. They were right, I love it! I had read that some people had some issues with output, mostly as they plugged straight into the unit. I use a TC Helicon Play Acoustic so the mike goes through that first so don?t have any such problems, it seems loud enough for most small/ medium venues, I havent pushed it hard as yet as I havent had to so can?t yet comment how it shapes up, but at low/medium volume levels it sounds great. For bigger venues, if required, I will add another Eon one, thats how good it is and the cost is not prohibitive also 2 of them would still easily fit in my car.
Set up takes seconds and the bluetooth channel works really well and is simple to use, there is no EQ available on this channel, but I haven't found that to be an issue as my backing tracks come from an Ipad and the default EQ is perfect. I tend to record my tracks with a strong bass and kick drum and the Eon one reproduces this well.
I considered the Bose units and Turbosound which are similar but all things considered, I am delighted with the Eon one, I didnt need battery power so the new more expensive Pro wasn't on my radar.
Thanks to the guys at Thomann for the advice and speedly delivery of the unit, ordered it on Sunday, arrived Wednesday morning! ???
Update, I bought a second one, together they are fantastic for small gig needs & I use them in stereo so use a small mixer to give more utility & to split the signal of my tracks, guitar , also stereo as are my vocal effects.
Przydatne · Nieprzydatne · Zgłoś nadużycie
Zgłoś nadużycie...

obsługa właściwości dźwięk wykończenie
Perfect !
30.07.2016
This is it, finally !
Goodbye SA220 and L1.
I am not going into details since there is so much information already on line. Everything that I was missing in the other two this thing has.
For those of you who will plug in an acoustic into one of those 2 main inputs, use MIC switch and balanced cable.
Much better and louder sound.
Also works great with my 6 chanel mixer plugged into 3/4.
The only complaint is that they did not supply any cover for it but I'm sure they will.
Kudos to JBL, finally I am true portable and have the best sound available.
Przydatne · Nieprzydatne · Zgłoś nadużycie
Zgłoś nadużycie...

obsługa właściwości dźwięk wykończenie
Great Machine
Saeupy, 08.01.2018
Great machine. Use it for gigs up to 100 people and no probs. Do find it overheats a little but great bass and very easy to use.
Set up in 5 mins and only 3 cabeles needed for guitar mic and power
Przydatne · Nieprzydatne · Zgłoś nadużycie
Zgłoś nadużycie... 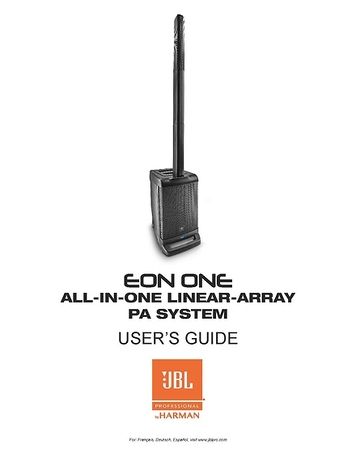 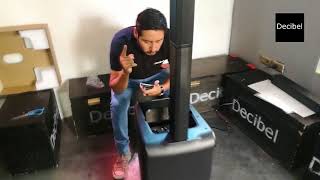 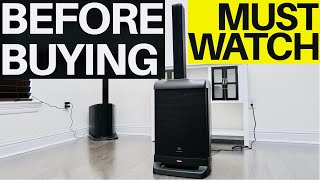