właściwości dźwięk wykończenie
Sorry I Bought 2 Of These Turkeys!
Picky Player, 11.09.2020
I bought 2 of these based on the advanced announcement of how great the necks and overall feel were. What a joke!

Both of mine had nut widths of a little over 42mm instead of the advertised 43mm (big difference in feel). The so-called "Fat 59" necks are smaller than a Gibson Slim taper and even Ibanez AS & AM models. Those are known for being slim. The nuts on both were very poorly cut and will have to be replaced.

The bridge feels awful on the hand (sharp edges) and the saddles sit way too high, causing the builders to have to pitch the neck back too much. The off neck pitch causes the strings to be really far from the pickup, so it sounds anemic, even when the bridge is lowered all the way down. That's a shame because the pickup is pretty good if you shim it up closer to the strings by several millimeters. Thomann should supply spacer brackets to anyone who has bought these, just to get the pickups within acceptable distance from the strings. Actually, they should get the bridge height and neck angle right – then the pickup height would be okay!

The tuners on one of mine were installed with no attempt to align them in a straight line - the back of each tuner is going a different direction. I guess they don't have rulers or anything with a straight edge in the factory where these are made.

The finish is not the advertised "thinly applied open pore" type - it's the the usual poly glop in a drab satin finish like the regular DC Jr. model. In fact, both of mine seem identical to the regular model in every way except for the lame push/pull pickup (and the higher price). The fingerboard even looks the same as the regular models in other videos!

As far as being a tribute to the inspirations from the past, these unfortunately FAIL miserably! All in all, Thomann has unfortunately missed the boat with these and is sadly misleading customers into buying a shoddily thrown together mess that looks like a `59 LP Jr. I've owned 3 of the original `59 Jrs and these don't remind me of those originals at all other than the general appearance.

It's a real shame that Thomann cannot spend a little more effort and offer a really awesome simple DC Jr. guitar. All they would have to do to straighten out this model is insist to the builders that all parts be correctly aligned, reject any with necks with a nut width of less than 43mm.. Make the necks thicker - like >22.6mm at the 1st fret and > 25.4mm at the 12th fret just like the real `59s were. Spend a dollar more and change the bridge to a Musiclily Pro Badass Style. It sits lower, has wider intonation, and is much more comfortable on the hand. That would also allow the builders to lower the neck angle so that it lines up correctly over the pickup.

Insisting on the aforementioned minor changes would cost practically nothing, but would elevate this guitar to what it should be. The builders are definitely capable of making an outstanding guitar if only Thomann gave them a little more guidance and upped their expectation level and quality control. I guess these are okay if you have tiny hands and no concern for sound or play-ability.
Przydatne · Nieprzydatne · Zgłoś nadużycie
Zgłoś nadużycie...

właściwości dźwięk wykończenie
Fantastic take on a classic
Sean I., 29.07.2020
This guitar is clearly based on the iconic Gibson Les Paul Junior double-cut but is actually improved in some ways (hence giving 5 stars for features from what is a very simple design of guitar)
1. The Gibson had a bridge that could only be intonated by adjusting it at the two anchor points at the end posts. This HB bridge also has individual saddles for each string giving the user much more control.
2. The Gibson had a single P90, this HB has a stacked P90 that cain be split. Meaning you can choose between the P90 or a humbucking version. I've found the differences subtle but there is enough variety to give you more control of your sound.

All that said, this is a fantastic guitar, particularly at such a low price point. The tuners are good (solid 15:1 ratio Wilkinsons), the controls (1 x volume, 1 x tone (with ability to split the pickup)) are simple, classic and effective. There are D'addario strings on the guitar. The fit and finish is excellent and I particularly like the translucent thin satin coating (though I wouldn't consider it to be "open pore"). The chubby neck feels great in the hand too.

In terms of sound this has a pretty powerful P90 style Roswell (HBs own brand) pickup and can growl or clean up really well. This is the first single-pickup guitar I've owned and you really have a lot of fun, and can get a remarkable array of tones, with just a tweak to volume and/or tone.

I saw Guitar Geek review this months ago on Youtube and have waited patiently for this to arrive in stock; I have not been disappointed. My advice is buy one of these, you cannot really go wrong!
Przydatne · Nieprzydatne · Zgłoś nadużycie
Zgłoś nadużycie...

właściwości dźwięk wykończenie
An amazing guitar
Kate N, 04.08.2020
I already have the SC-Junior single cut which is a great guitar and represents outstanding value for money, but this one is even better. What makes the biggest difference is the Fat '59 neck profile and slightly more pronounced curve of the fretboard radius. I don't have big hands, but It sits very very comfortably in mine and with the smoothness of the lovely enbony fretboard, make for a very comfortable playing experience. Fret ends are very well finished with no sprout whatsoever. The nut slots on the SC-Junior were cut a little too high and required deepening to achieve optimum action, but on this one the nut is cut to the perfect height. The range of sounds are expanded too with the single dog-ear pickup being switchable from parallel coil humbucking to single coil. The Wllkinson tuners fitted are also an improvement on the unbranded ones fitted on the SC-Junior. The standard of finish is superb throughout - the almost matt, almost open pore finish giving this instrument the feel of a vintage instrument. The only cons I can find are that the B and top E strings catch and ping a little in their nut slots - a common problem with 3-a-side headstocks but one easily solved with a little graphite and vaseline. Highly recommended - especially to other women players looking for a simple, lightweight rock machine.
Przydatne · Nieprzydatne · Zgłoś nadużycie
Zgłoś nadużycie...

właściwości dźwięk wykończenie
Unbeatable value!
Riegour, 30.11.2020
I wanted to own a Doublecut Junior style guitar for a long time. I was really happy to see Harley Benton make junior models. It was a no brainer for me.

So here it goes

Cons
Wasn't able to get a perfect setup on it. The action has to be set a bit high to avoid fret buzz. Maybe it could use some fret leveling.
Hardware is understandably cheap feeling. I would consider swapping the nut, bridge and pickup at some point. Maybe the tuners too.
Pickup sounds nice for this kinda price range. Worth considering an upgrade in the future.

All in all I love this guitar because it seems like most of the cost of it has gone into things that can't be easily changed, such as the fit and finish, the feel of the neck etc. And while the hardware is cheap it can easily be replaced.
Przydatne · Nieprzydatne · Zgłoś nadużycie
Zgłoś nadużycie...

E-Guitars
Electric guitars are ten a penny and nowadays there are at least as many models and makers to choose from.
Przydatne akcesoria 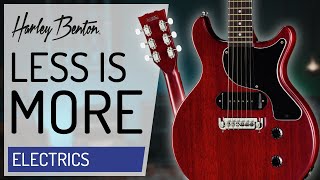 Pokaż wszystkie
E-Guitars
Electric guitars are ten a penny and nowadays there are at least as many models and makers to choose from.
Pokaż wszystkie
Guitar Setups
The range of available guitars and amps has never been greater than it is today, and a huge variety of sounds are easily accessible.