właściwości dźwięk wykończenie
Very Happy with Initial Impressions
GregT, 12.03.2019
I received the guitar yesterday and immediately tuned it and began to play it. This guitar has a great neck profile. I have an older v-neck D35 which is great for finger picking but is a little "fat" by today's standards. I just sold a Taylor because the neck was uncomfortable. I played this new Harley Benton for an hour and it is a great feeling neck. There were a few dust particles in the finish at first, but with an hour of playing, they disappeared. The neck is silky and fast.

Overall impression of the guitar is that the construction is flawless. It's a beautiful guitar. On the downside: The MOP inlays in the neck are fairly dark and not as pearlescent as I would have expected; and, I'm old school and guess I like shiny finishes over matte finishes. The guitar would benefit from a gloss finish. That's just me, YMMV.

Soundwise, I'm very happy with the guitar. It isn't a Martin, but it's got to be considered at the top of its class for Spruce top guitars that cost 2 or 3 times Thomann's price. Seriously, this is a very nice sounding guitar from the outset and it continues to open as time passes. Sustain on the guitar is very very good.

The action could be improved by lighter strings. The guitar came with a .012" high E string. I'm happier with 10's, so I'll change the strings in a few days after the guitar acclimatizes a bit more. Initially, the guitar appeared to have a rather high setup with too much bow in the truss rod. After 24 hours, the neck bow is .009", low E is 3/32" and high E is 5/64". Quite acceptable for factory setup. And I really appreciate the quality control card included with the guitar. They show that F8 andBI-BL inspected the guitar and tested setup. Thanks!

Overall, I doubt you can find another new guitar on the market that competes with HB/Thomann at this juncture. This D41 is astounding for this price.

EDIT: I decided to lower the action by sanding the bottom of the saddle. The frets are relatively small and I felt I was working to hard to get clear tones when barring. This definitely improved the action. I've had a chance to really play this guitar for extended sessions and the walnut is impressive for its ability to achieve bell-like tones on the upper frets. I've used the guitar in numerous recording sessions and note clarity has been superb. It's a nice complement to other guitars with rosewood or mohagany backs. Now, the downside: The bridge is a softer wood than it should be AND the string pin holes have been recessed too deep. When I changed out strings, the pins are now about .125" deeper than they were from factory setup. Not good. I don't think I'll need to do a changeout in the near future, but I'll probably install a brass backing plate inside the top, like Mitchell's PlateMate, to prevent problems.

właściwości dźwięk wykończenie
Superb and More Than That
Dusko, 12.06.2018
This is my 8th Harley Benton acoustic guitar and amongst those there were 2 worth mentioning; the CLD-15M and the CLA-16S. Fantastic guitars for the money but not entirelly my cup of tea as I wanted lots of clarity and sustain. I went on to search for my perfect guitar in guitar shops and played all sorts of stuff from expensive Martin and Gibson to Epi, Yamaha etc ... One guitar ticked all my boxes and that was a Yamaha LL16 but it was over my budget. Been told by some that this CLD-41S is a crazy good guitar not just for the money but a "crazy good guitar" for any money, so I went ahead and bought it!

Everything from the nut to the bridge is spot on and needed no adjustemtn of any kind expect me oiling the fretbaord! Tuners perfect, no blemishes in the finish fine comfortable action, fresh D'addario strings that zing well. No fret buzz. All 5 Starts!

The most important aspect for me was that sustain on low E and A strings above the 12th fret which usually on most acoustic guitars sounds as a dead "thump" sound without sustain! This guitar has no such issues! It rings and rings! Sustain for ages!
The over all tone when you strum the guitar hard is awesome! Its as if I have used a slight compression and a slight sweet Overdrive, yet still very satin like clean tone! When strummed gentle it still projects the sound well and very clear, very pronanunced! Also when strumming close to theneck the tone does not go muddy just warmer and of course when strumming close to the bridge the treble is more pronaunced but that is never much of an issue on any acoustic guitar. Its mostly that warm tone when strummed close to the neck that I was after, that stays clear but warm, no muddiness here folks!

This guitar can growl and is very loud outdoors! It also responds well to quiet finger picking, not loosing much volume as it resonates well! No boomy/boxy tones here!

Just a great buy! Well done Harley Benton for offering such an instruments for such price so even the poor can afford it!
Przydatne · Nieprzydatne · Zgłoś nadużycie
Zgłoś nadużycie...

właściwości dźwięk wykończenie
A Really Great Acoustic Guitar
micoli, 01.11.2018
I already own a Harley Benton HB Custom Line King-CE NT and have always been very happy and impressed with it, but I wanted an acoustic guitar with a spruce top that was a little brighter sounding. After some research I settled on the Custom Line CLD-41S WN. I have now owned the guitar for over 3 months and have grown to like it more and more and play it for at least a 2-3 hours every day.

It arrived about 3 days after placing my order in the usual double transit box. My first impression was that, although understated in looks, it was was very impressive and an attractive guitar. Its' Satin finish was flawless and, the white binding to the body, neck and head-stock, really gave it a quality look. It also has a lovely fresh Spruce wood smell coming from the sound-hole.

The truss rod had been perfectly adjusted and the guitar does not have any buzzing on any of the frets. The fret ends were fine as well, with no sharp edges. The intonation was perfect when I first received the guitar and still is, even after the saddle adjustment.

The tuners are of good quality and holds the tuning for ages. The Abalone fret markers were nice and flat on the fretboard so they are not noticed when playing. It has a nice comfortable neck which I would call a shallow 'C' profile. I find the sound projects well and is well balanced, with neither the bass or the treble being dominant.

After changing the strings to 10's, (as I like to occasionally bend the strings as I'm primarily an electric guitar player), to me it sounds and plays perfectly.

I know the Custom Line CLD-41S WN is supposed to be a Martin D-41 replica. It certainly isn't a Martin, and I wouldn't expect it to be for the price, but you should really take it on it's own merits as it is a fantastic acoustic guitar in its' own right. It is excellent value for the comparitively low cost. This is my 7th Harley Benton guitar and it will not be my last.
Przydatne · Nieprzydatne · Zgłoś nadużycie
Zgłoś nadużycie...

właściwości dźwięk wykończenie
It's perfect!
nektar, 05.10.2018
Not only for the amount of money paid for that guitar, but considering this instrument as whole - it's just a piece of art. The satin finish, the feel of the wood, the playability are just astonishing. It makes you happy just to think about playing it in the autumn evening.

The materials and finish are great. The sound is very loud and clean. This guitar roars! Even the fretboard wasn't that dry when It arrived. The action is bit high but I assume that's just because they leave you a way to personalize it. Guys at my local guitar clinic were astonished with how well was that instrument built. Of course there are some imperfections with frets and the saddle, but nothing too big. As they said - almost always even the highest-end guitars for $10000 can have couple of those problems. The CLD-41S truly has a great, great, great potential and with a little additional money and time it could be made into really extraordinary instrument.
Przydatne · Nieprzydatne · Zgłoś nadużycie
Zgłoś nadużycie... 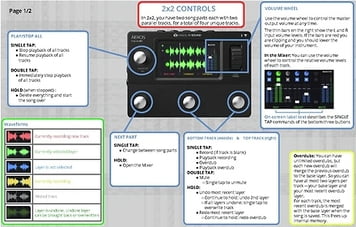 Manual
Pokaż wszystkie
Acoustic Guitars
The steel-strung acoustic guitar has a range of sounds that are unmistakeable and not easily replicated with any other type of guitar.
Pokaż wszystkie
Guitar Setups
The range of available guitars and amps has never been greater than it is today, and a huge variety of sounds are easily accessible.
Pokaż wszystkie
Manual
PDF
Podsumowanie:
Przeczytaj test