wykończenie właściwości obsługa dźwięk
A quality interface, but has some flaws.
Tompz, 30.11.2020
Build quality of this thing is excellent and the pre-amps are incredible quality...however...

I needed this box to be the core of my home studio and it's just not possible. The rear inputs are so low-gain that even a DJ mixer cranked up to 10 was coming in at -21db.

I tried my Korg synth, my OP-1, other outboard gear, none of them could deliver a signal strong enough via the rear inputs.

I raised a ticket directly with Focusrite and they said that I would need to amplify in my DAW. Which would be fine for recording typically, however impossilbe when I need hardwear monitoring for just listening to records or jaming on my synths with no computer connected.

My buddy has an old Saffire interface that simply has a gain boost feature in the Focusrite software mixer which would work perfectly, sadly they have not implemented this feature for this device.

Sad to send back as, like I said above, it is a quality looking / feeling / sounding device, however let down by such a silly oversight here.

I will be opting for one of the Arturia interfaces with a dedicated Phono connection on the rear so this can be the brain of my studio.

wykończenie właściwości obsługa dźwięk
Ozzy Esen, 25.08.2019
This is just a great interface, with great sounding preamps, powerful headphone outputs and pristine converters. I had hard time to make a choice between RME Babyface Pro and this one.
A set of extra line outputs, 2 more preamps and an extra headphone outputs in comparison with Babyface made me choose Focusrite.
I was worrying about drivers, but I can confirm that drivers on Mac are great. I can record at 16 samples buffersize thus very low latency and I do not hear a single glitch or experience performance issues.
The preamps have lots of clean gain and can handle dynamic or ribbons microphones very well.This is usually a point where onboard interface preamps fail. Air function is a great option, works very well with any source that you?d like to add some clarity and presence to it.
This thing is relatively big and heavy, much bigger than it looks on photos. This a a great sign of build quality and protective housing but I you want a mobile interface maybe consider the 2 channel version. But the quality, and extra inouts/outputs makes it worth to take the effort to carry something bigger and heavier.
I came to this interface after selling my Thunderbolt Protools HD system and I?m not missing anything . Not even the stability or low latency of thunderbolt.
A plus point after suffering from the Core Audio performance of Avid Pro Tools interfaces for years, is that Core Audio performance is exceptionally good. So I?m not looking back eventhough Thunderbolt is a rather nieuw and superior technology.

A few cons which are no dealbreakers for me, but would be great to have:
1) no A/B speaker switch available on the interface
2) no mute/dim or mono switch - though this can be done via the control software or app.
3) no samplerate conversion available on spdif / adat
Przydatne · Nieprzydatne · Zgłoś nadużycie
Zgłoś nadużycie...

wykończenie właściwości obsługa dźwięk
Great quality and -- do not underestimate this -- highly versatile
imreych, 19.06.2020
The unit is solid and works very well. The driver seems quite reliable; I have not had any troubles. OK, it is not an RME, so do not expect the 3ms low latency figures! There are some occasional cracks but all that is normal with Win10 users like me. The sound quality is very good, but then again it is very hard for many to fault even the cheaper units on those grounds alone.

What makes this interface special is that it offers a significant degree of flexibility to novice users. Many are already advertised on the website (eg. S/PDIF in/out, Optical in, Midi in/out, two separate headphone channels, good standalone software mixer). But, there is more. Do you want to use your digital effects unit as an outboard? This unit can do it -- assuming that your effects unit accepts line-level inputs. Do you want to be able to have live meetings with your band mates on Zoom/Skype? Connect outputs 3&4 (=headphone 1 mix) to inputs 1&2 while using the other inputs for your mic/instruments.

Why four stars for the features? Well, here are some nerdy details. The software mixer does not allow you to distinguish the first headphone's output from output 3&4. The big monitor fader in the front cannot be assigned only to outputs 3&4. There are no input gains or metering for the line inputs at the back. It would have been preferable to have separate Phantom power buttons for all four Mic inputs. I also have not been able to get the mixer to work on iPad for a semi-stand-alone operation. Lastly, it would have been great to have some basic eq options (LP/HP) instead of the "Air" functionality -- which honestly is a bit of a marketing hype. These are not major deal breakers but they do undermine some of the flexibility I mentioned above.

To sum up: This is a great, highly usable and versatile interface at a reasonable price for the intermediate home studio enthusiasts.
Przydatne · Nieprzydatne · Zgłoś nadużycie
Zgłoś nadużycie...

wykończenie właściwości obsługa dźwięk
Great product but...
sratas, 28.08.2019
In the past I used Audient interfaces and pres. wanted an upgrade but what I got is another flavour of good. The mic pres are clean but warm, there is something thick in the response, almost a bit lush without the air option, wich, in turn, opens up the high mids and highs considerably. The Audient pres are more characterful instead and react in a better way when you push them crancking the gain., with a great grit. The clarett has 57 db of available gain, it is sufficient with sensitive mics or loud sources but it feels short when using room micing, far positioning or ribbons. The preamps are considerably more hissy and noisy than my previous interface, far before reaching their limit. Two other minus, hence the missing stars, are the absence of a pad on the mic pres and the above mentioned lack of gain. The drivers and the converters are rock solid and the focusrite controll intuitive. The output for monitors and headphones is healthy and punchy.
Przydatne · Nieprzydatne · Zgłoś nadużycie
Zgłoś nadużycie... 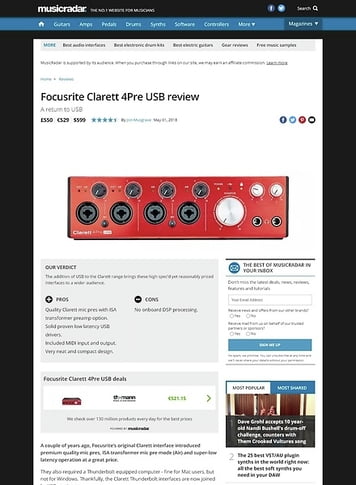 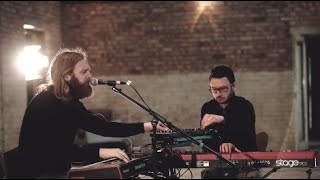 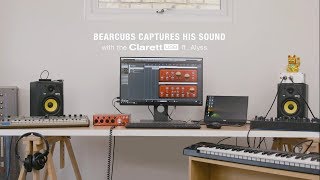 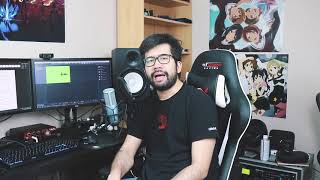