obsługa właściwości dźwięk wykończenie
(edited) Now I'm impressed (and positively).
Daniele T., 01.04.2016
In a previous review of mine, I said the SuperEgo had failed to impress me positively. I had found its output almost obeying a set of own rules, its tone seeming unaltered by different styles of playing.

Some time after my review, I've asked myself if I had done all I could to find out if the SuperEgo was really unsuitable to my tone search. And answered myself no, not yet. There was still a lot to try, before I had full rights to my judgement.

I've since then wired the most flexible dsp-based effect of mine, a maxed-out Eventide H9, into its send and return bus, and started to gauge the SuperEgo reaction to the most diverse type of effects in its sidechain.

I've found out that, contrary to my hasty first run, the SuperEgo shines fulbright when its inner path is being processed, or even better, heavily processed, in pitch, time, modulation, or all of the above concurrently, via the send/return sidechain bus.

The blend control alone of whatever fx you'll plug in the sidechain does and will produce the widest change in colour within the very setting of the SuperEgo.

Whatever time I've invested with fx like chorus, flanger, phaser, tremolo, ring modulators and any other sort of delay-based specialty, I've been rewarded with a handful of unique (and usable) tones of different timbre and spectrum, hugely varied in comparison to using the SuperEgo without "side-chained" effects.

Beside this, SuperEgo still excels at doing what the Freeze does, so the investment sounds lucrative for any curious, tone-hungry, reckless sound enthusiast who's seriously willing to come to his or her individual tone and is prepared to work for it.

If you're in search of an effect with which you can easily recreate any classic rock tone of the golden, epic age, and in a matter of seconds, you've not probably landing on your feet here, you might want to look elsewhere.

If you want your tonal palette to expand to almost unlimited possible directions, and are prepared to sculpt your sound with purpose and patience, then look no further, you'll hardly ever yawn when fiddling with the SuperEgo (or hear the same effect twice).
Przydatne · Nieprzydatne · Zgłoś nadużycie
Zgłoś nadużycie...

obsługa właściwości dźwięk wykończenie
Nates, 26.08.2019
I was firstly considering to buy the Freeze pedal to solo over or to create extra ambiance. Freeze sounded very flat and needed reverb or/and delay to enchance it + you get fed up with the one and only retention sound. With the superego's gliss and speed knob i can really get sounds from short sustain or kind of plate reverb to synth mixed with slider-like transitions between changing tones way up to stacking 'iluminati' polyphonic sounds that can last forever while staying in control of both the dry and effect level.

I use all the modes latch, auto and manual. They are all very fun and I don't even have a problem switching between modes while playing.

Build quality could be better for the price. Superego is very light weight compared to other pedals on my board an its footswitch is better than the one of EHX Freeze but it sometimes produces a wierd cracking sound making you want to step of it.
Knobs have a very satisfying movement and are nice to touch (if that matters to you) and offering impulsive operation of the pedal although the effect knob could have a bit more comand on the quieter side. 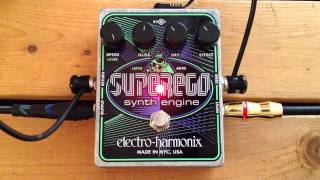 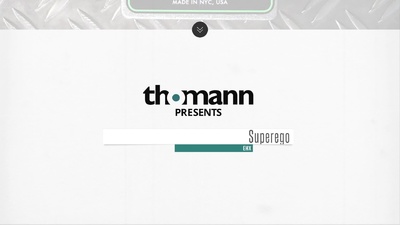