obsługa właściwości dźwięk wykończenie
Not bad but I have seen better
Mr Transistor, 24.05.2017
The Digitech CabDryVR is cab emulator that covers a series of cabinets on two separate channels.

It probably appeals to musicians that would like to connect their pedalboard directly to a PA system without carrying a heavy guitar or bass amplifier with them.

The CabDryVR can also be used for direct recording of a guitar or a bass. However, considering the overabundance of plug-ins available on the market, it is likely that the average musician would prefer a more flexible, software solution, to an external hardware unit.

The CabDryVR is based on IR (impulse response) technology. Essentially, the response of a cabinet is captured with a microphone, test signals and some software analysis. Subsequently, the results are loaded on the pedal and various IRs are selected by the user. This allows the final user to recall the characteristics of a specific cab previous analysed.

Apart from the controls one expects from a unit like this, the CabDryVR has a "Size" knob for each channel. From what I can hear, it looks like this control moves the high frequency cut of the cabinet that has been selected. It is a very useful control that has probably being superimposed to the cabinet IR to tune it according to the user preferences. It could been seen, to some extent, as cut-only treble control.

Unfortunately, I found the CabDryVR not very convincing. Not bad but not that good either. It is difficult to say if its shortcoming are due to the quality of the IR used, the limits of the IR processing or some other hardware limitation.

Although the Neunabler Iconoclast or the AMT Pangaea CP-100 fall short on a few fronts, the CabDryVR is not convincing on the most important elements: tone. It is not a bad pedal but compared the competition, I prefer other pedals.

*** Cons
- Unbalanced outputs
- Unconvincing models. Flat sounding with some of them having a strong mid peak.

obsługa właściwości dźwięk wykończenie
Boom meets twang!
Emile Michel Hobo, 30.06.2020
The pedal had been taken out of the box before I bought it, even though it said it was a firsthand. The original sticker as I saw it in an unboxing video had been fully removed and replaced by black Thomann-tape, so I couldn’t read the product description on the box. Needless to say the carefully designed box wasn’t as pretty to behold when I carefully removed the tape. It took some of the paint with it. When I buy first hand pedals, they should be first hand, not second hand and "only" first rate.

Run the TC Electronic MIMIQ-doubler through this pedal and you get the most beautiful spatial experience you can imagine. Select one speaker for the boom of the voom, another for the bang of the twang, and even without the doubler in front of it, the DigiTech CabDryVR never fails to deliver.

With a wide range of options, you can easily come up with different settings also when recording different instruments. You can choose a total of 14 speakers, 7 guitar and 7 bass speakers, and two of those bass speakers also come recommended for the guitar.

For each of the speakers the range of interpretation is beyond belief. You have to hear it to get it. 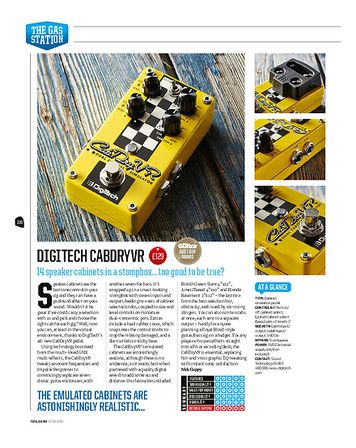 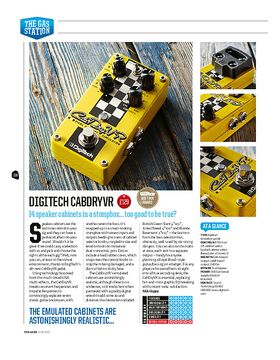