właściwości dźwięk wykończenie obsługa
Fun and usable, but begs for an upgrade
BassCrab, 24.11.2017
If you?re wondering whether to buy the single amp or the stereo package ? buy the package because with the single amp YOU DON?T GET THE POWER SUPPLY! That?s just horrible in my opinion and easy to miss in the product description. What?s worse, the Blackstar engineers decided on the totally non-standard 6.5V 1.5A so it would be difficult to find a replacement.

The stereo pack however, comes with everything you need.
The size is indeed tiny, but it produces quite a big sound. It?s loud enough for the bedroom and can easily keep up with an acoustic band. Your bass will be heard, but not felt rumbling the room, which is to be expected from a mini-amp.

The sound is decent and quite usable, but it has a ?plastic? character to it. A real shame because it might be a killer set with a couple of improvements. I?d like to see a version with wooden enclosure like in Genius PC speakers. It wouldn?t cost much more to produce, but I expect it would sound more natural.

The OD channel is louder and has a lot more treble and hiss. On light gain settings it has it?s moments.

One knob EQ is actually great! Clockwise from the center you get a typical mid-scoop with boosted highs and lows, and CCW it gets more vintage by cutting the highs. Works great! My favourite setting is 1-2 o?clock.

Compressor is very useful when kept really low as it adds a lot of warmth and punch to the sound. However, crank it up past 10% and the artificial cut-off with hiss becomes too annoying. A slightly better compressor would have made this a far better unit.

The SUB knob is a simple analogue octaver with all its shortcomings. The tracking is so-so and what it adds to the sound is mostly farting noises with a slight delay from your playing. I think that wasn?t a good idea. A simple EQ bass boost or even a cheap chorus would have made more sense than the octaver which, for me, was unusable.

The headphone output is where this thing shines! It gives one of the most pleasing headphone sounds I ever experienced on a bass. With my AudioTehnica ATH-M50 the bass was deep and punchy, presence was decent and the noise was surprisingly low. If not for anything else, this amp is great for silent practice.

On the other hand, the Aux input was surprisingly crap. The Fly3 stereo speakers sounded weaker and more mid-rangey than my laptop speakers. Which was a huge disappointment.

The extra speaker does make a difference and I?m glad I bought the stereo pair.

Overall, It?s a fine mini-amp, good for bedroom practice and outdoors. I would recommend it to a beginner as a first bass amp, especially if you want to travel with it or play with headphones.
This amp has a potential to be a must-have, but because of all the unfortunate shortcomings, I?ll be looking forward if Blackstar decides to make a V2.
Przydatne · Nieprzydatne · Zgłoś nadużycie
Zgłoś nadużycie...

I was stupid enough to NOT purchase a 1/4 inch cable to connect my bass to this, so I haven't tested this properly. Yes, call me an idiot. But I have used this as my desktop speaker for about a week now.
Judging from this experience, I'm pretty sure it will give me an OKAY amount of bass sound when I play my bass through it. But just like any small sized speakers, it because annoying as you crank up the music volume because it doesn't bring up the bass as much as it brings up the higher frequencies.

Among battery powered amps, to play with music through Line in, Yamaha THR series sounded the best to me. I sometime use it just to play music on it. but it's not as compact. Vox stuff usually feels like toys.. Pignose is not even PORTABLE. :D

This Blackstar FLY battery powered amp feels pretty good for its own up sides. small enough, sounds alright, has a built in compressor(I don't like a compressor, but people love it, and I love free bonus features), AND IT'S BATTERY POWERED! oh, and it also looks good.

one strange thing is, this battery can run on 6 AA batteries. when used with rechareable AA batteries, that makes 7.2V(1.2 x 6). and the power adaptor that comes with this amp is 6.5V, which is smaller than when it's battery powered. weird.
Przydatne · Nieprzydatne · Zgłoś nadużycie
Zgłoś nadużycie... 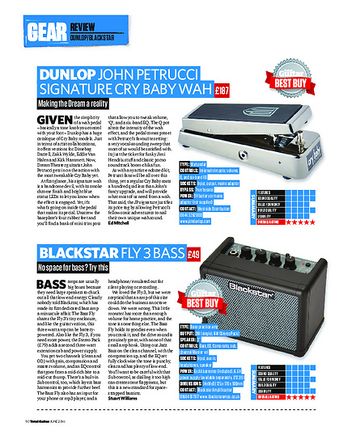 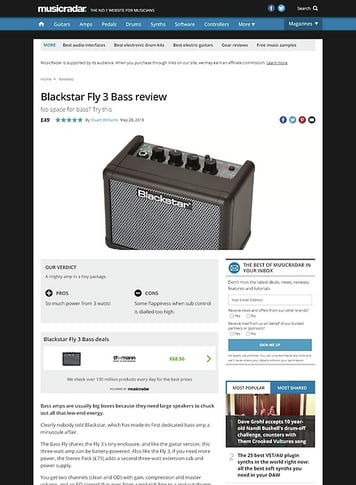 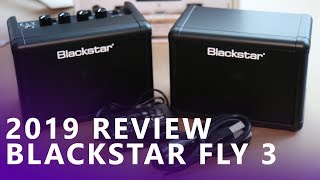 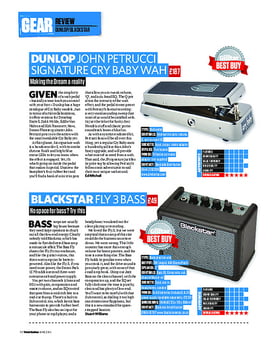 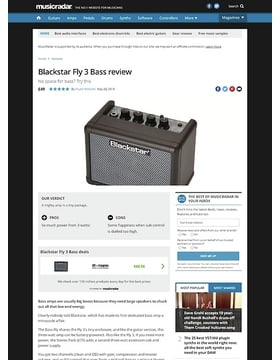 Pokaż wszystkie
Bass Amps
Everything could be so easy, since all you want is to amp up your bass, right? This guide will provide you with an overview of what's available in the bass amp world!