respons geluid afwerking
Really good one
raketa, 25.04.2017
I use this mouthpiece in my everyday job, in the musical theatre, in the military wind band, and I also play in an academy big band with it.
So, it's very successful mouthpiece because it can be used equally well in classical music, jazz, big band formations or musical.
The sound is deep, richful and "helthy", which in my opinion is one of the most imprortant things. Also it looks very good, style and disaign in high level.
One little detail, which was not so pretty for me, is that, when I receive and start using it, I left the mouthpiece out of the case for some days, maybe one-two weeks. And the ligature became a little darker than in the begining, and with some small spots on it. Maybe it was my mistake, because I left it to react for too many days with the oxygen.
But the main thing is that this Vandoren V16 bari mouthpiece is not so expensive, and gives you the freedom to enjoy while playing your music.
So I recomend it for people with serious intentions to the bari saxophone, good luck :)
Behulpzaam · Niet behulpzaam · Evaluatie melden
Rapporteer een evaluatie…

respons geluid afwerking
Great throughout the range
11.01.2016
I've used a few baritone mouthpieces over the years, but stuck to two others mainly - a Berg Larsen metal, and a Rousseau JDX. I've kept the latter for solo work within a large section, but this B7 allows for clarity throughout the octaves, and with a slightly smaller tip opening than I'm used to, doesn't require as much 'puff' - yet is still powerful. Excellent for working in horn sections, and allowing long notes in ballads as part of that section....If you play bari, you'll know what I mean! It has the usual consistency build of Vandoren mouthpieces too.
Behulpzaam · Niet behulpzaam · Evaluatie melden
Rapporteer een evaluatie…

respons geluid afwerking
Great tone with control!
10.12.2014
Fitted to an Antigua Pro BS4240 Power Bell this V16 B7 (Rico 3 reed) allows for a loud brassy sound if needed but with mellow overtones so as not to irritate.

Upgraded an unbranded 5C this V16 B7 is of no comparison and allows the sax to be complete with this upgrade. Hope Denis DiBlasio does not mind a mention as he kindly tested this on a video website. ZZ Vandoren reeds are recommended.
Behulpzaam · Niet behulpzaam · Evaluatie melden
Rapporteer een evaluatie…

respons geluid afwerking
The good Berg Larsen
ErikF, 19.09.2013
I've been looking for a good Berg Larsen for a long time. Then I got to try one of these when playing with Denis Diblasio, and there it was. My good Berg! :-) You know what you get when buying Vandoren products.
Behulpzaam · Niet behulpzaam · Evaluatie melden
Rapporteer een evaluatie… 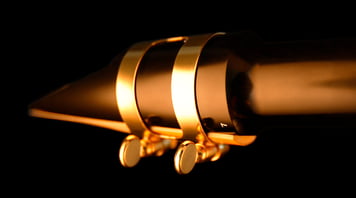 Saxophones
Saxophones are available in a price range from about €300 to over €4000. Which instrument is suitable for a beginner? 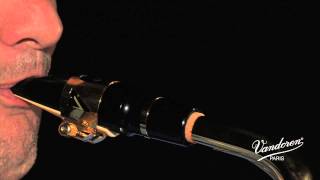 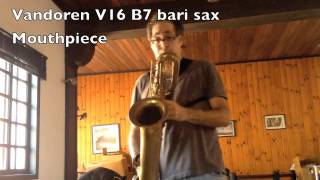 Toon alles
Mouthpieces for woodwind instruments
Not all mouthpieces are created equal. Some things you should definitely know!
Toon alles
Saxophones
Saxophones are available in a price range from about €300 to over €4000. Which instrument is suitable for a beginner?
Test Conclusie:
Lees review