bediening features geluid afwerking
Very useful device
Fanthom, 25.10.2019
I have been using VL3X for 1.5 years. I've played around 300 short (30 minutes) repetitions, about 75 long (3 hours) concerts with the VL3X and am satisfied. In my opinion, this is a unique and very useful device, that has no analogues in the world. I am an underground garage rock artist, vocalist and guitarist. The drummer plays with me. Most of our concerts are in small pubs, where 50 viewers are big deal.
And we use the VL3X backing track player to play bass guitar track. Very good internal memory - fits a lot of backing track's. I don't know, how much will fit backing track in this device, but I've already uploaded around 100 wav files. This is important, because I use backing track a lot - different in different concerts.
I write a review after reading the negative reviews. Some say, that VL3X are bad guitar amps. But this is not true. A clean brit, 4/12 crunch, scooped amp and tc dark matter overdrive - sounds good to me. There are many parameters that can all be fine-tuned, adjust as needed.
Automation is a great thing. I use it for guitar effects. When you switch from guitar rhythm to solo during a song, I write down the effect change in backing track automation. Very comfortable. No need to bother with effect alternation. You can focus on performance and communication with viewers.
In "do it yourself" underground rock festivals with minimal hardware, we use VL3X to process the lead vocals. Great for all punk rock and modern metal bands.
Some people complained about the VL3X failing fast. But it works for me, despite the fact that one night after the concert with the VL3X I fell on the asphalt. :) And nothing happened.
If there is any doubt about the operation of the device - then I just reboot the device.
Commentators curse VL3X factory presets. I don't use them, it's just a demo. But overall I use a lot of the vocal effects in VL3X, they are all useful. They need to be fine-tuned. Work with the VL3X will be a good task for the advanced audio engineer as well. And for us - rock'n'roll losers - it will take a long time. Combining effects, the VL3X is best for listening with headphones!
It should be understood, that once you buy a VL3X, you will not run with it on stage or repetition the same day - it will take at least a month to study, tune, adjust to your needs and your productions.
Behulpzaam · Niet behulpzaam · Evaluatie melden
Rapporteer een evaluatie…

bediening features geluid afwerking
Not for the serious guitarist!
Zak K., 25.06.2017
This pedal has so much potential, the vocal section is great. The room-sense feature is amazing. The looper is okay... but from the guitarist perspective, there are a some serious deal-breakers.

With all the connection possibilities provided on the back-panel interface, the looper playback can't be separated from live guitar (with effects).

After the guitar signal enters the pedal, it has to exit either via:
1) the "guitar through" or
2) the main output -- (XLR)
and/or
3) the guitar outputs (tele jack)

As expected, the guitar-through jack offers a clean signal. If you connect to your amp using this jack, no loops or effects will come through.

Any serious guitarist who has invested in a signature sound will want to use their amp exclusive for their guitar. The amp is, after all, part of their instrument. It's bad enough to share your guitar signal with the looper (and potentially live vocals), but if you use this pedal to record a clean loop and decide to turn on the amp distortion for a solo, the loop will then distort along with it.

(If you connect your amp to the guitar-through jack, then you can't use any of the built-in guitar effects. Even a two-channel amp will not help, unless you can separate the looper from the guitar+effects signal.)

Since your only option of not sending loops and vocals into your amp is to route the guitar signal through the guitar-through jack, this means that the built-in guitar effects will not help you save any space on your pedal board.

As for the guitar section, the compressor and reverb are great, the delay and chorus are basic, but the other effects leave a lot to be desired. The auto-wah is unpleasant. The amp simulations are far from realistic. There is far, far more to amp simulation than the fancy pre/post EQ system touted as the nut and bolts of it all. The one place where they could really have used such an advanced pre- and post-EQ is the overdrive, but no such option is provided. You get only one uncustomizable overdrive sound per preset over something that doesn't sound or behave anything like an amp. A rhythm sound usually needs entirely different tones from the solo, but this is not provided for. 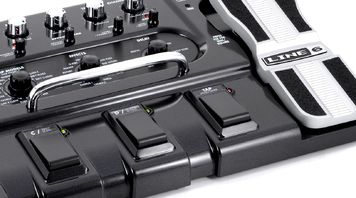 Guitar Multi FX
The multi-FX concept has been around in various forms since the mid 80s - It is therefore no surprise that there is a huge range of hardware available.
Interessante toebehoren 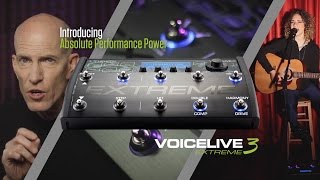 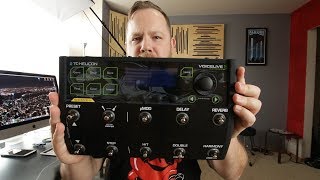 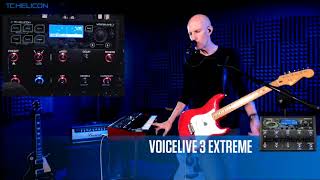 Toon alles
What you may not know about Voi­ce­Live 3 Extreme.
TC HELICON 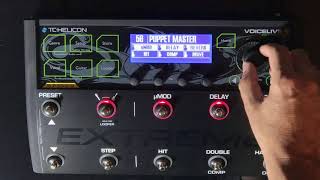 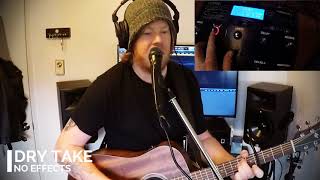 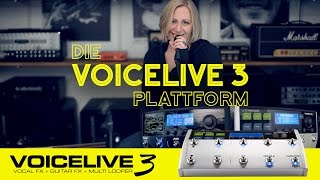 Toon alles
Guitar Multi FX
The multi-FX concept has been around in various forms since the mid 80s - It is therefore no surprise that there is a huge range of hardware available.
Toon alles
Multi Effect Pedals
The entrance of digital technology into music electronics makes an ''Echo Chamber'' affordable for the little man.
Test Conclusie:
Lees review