respons features geluid afwerking
A funky flute for kids!
The whistle-blower, 25.06.2021
As I was looking for a backup flute, I chose to try out the Nuvo Student Flute in black. On Youtube there were several good reviews and interesting musical collaborations which sounded funky and fun, especially as an introductory flute to beginners and young students, so I was inquisitive to find out if the flute lived up to it's reputation.

On first glance: the flute came in a plastic casing and was reasonably well protected. The black flute eyed modern, sturdy and trendy and was easy to assemble. The mechanism and seals seems solid. However, when playing I discovered that the lower and higher register were more difficult to play then the rest of the flute. The flute has a surprisingly good sound considering that it's made out of plastic.

The flute is lighter (which is great for people with ergonomic problems from heavier flutes) but lies slightly thicker in the hand. The notes themselves were easy to the touch to play but the flute is receptive to different temperatures.

Also, as I practice for quite a substantial amount of hours per day, the mouthpiece, made out of plastic had some little nasty plastic edges on it which tend to irritate the lips.

The bottom attachment (lower notes) work with a click-in system. This is good if one does not know how the flute should be assembled, but is not very practical if one has eg. a smaller pinky. (You cannot adjust that section of the flute to suit your hand).

The flute is quite solid and comes in a veriety of colours and combinations making it very attractive for children. It also has a special mouthpiece for kids to get them accustomed to playing the flute. As an added bonus, it can be washed and played under the shower! For a young child being introduced to music, this might be an attractive and funky option, but in this price-range, I think there are better flutes on the market, certainly for the more serious players...
Behulpzaam · Niet behulpzaam · Evaluatie melden
Rapporteer een evaluatie… 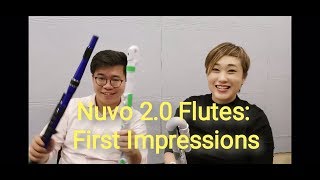