features geluid afwerking
Not a Tele knockoff
Riffmeister, 30.06.2021
This is a great guitar, a couple of simple tweaks after it arrived and it plays like a dream. This is not a cheap Fender/Squire knockoff guitar this is its own beast. The modern C neck and 12" (as opposed to classic C neck and 9.5 radius) gives this neck a much faster sleeker feeling than a comparable "name brand" guitar.

I'll refrain from reviewing the electronics as I plan to replace them anyway, but they appear adequate in all respects.

The fit and finish of this guitar is impeccable for what this fiddle costs, a similar squire is $249.99 (6/30/21) and doesn't include a matching neck finish or modern neck.

Pros: Great beginner rock or metal guitar that can grow with you for many many years. An extremely solid instrument that feels far more expensive than it is.

Cons: About the only drawback for this instrument for me personally is that I live in the USA so it costs me $65 to get this shipped, but even the sting of that was lessened by it arriving so quickly (ordered on a Sunday night, it arrived Thursday afternoon).

Great guitar, great company. This is my second Harley Benton guitar (the other is a SC-Custom II Active White) and its probably not gonna be my last.

Hope that this helps someone out there.
Behulpzaam · Niet behulpzaam · Evaluatie melden
Rapporteer een evaluatie…

features geluid afwerking
McCaster, 23.04.2021
The best low price telecaster i have , the guitar arrived in great condition all i had to do was 2 turns on the truss rod lower the action and it is fine .
I tried it through a Fender champion 20 amp louder than any other i have next its my Laney then my son will give it the full metal try out on his 60 watt tube amp . the neck is lovely and smooth im going to oil the fret board once the strings go out , the ones on are fine just needed stretching a bit . Im nearly 70 if you ask me if i had bought this 40 years ago paid £400 i would not have batted a eve lid plus you can mod easily if you want to with any pickup you like .
Behulpzaam · Niet behulpzaam · Evaluatie melden
Rapporteer een evaluatie…

features geluid afwerking
So good I bought it twice!
CoveredInSound, 30.04.2021
For a long time I wanted a guitar that I could leave in a different tuning (C#) and after seeing various reviews of this and looking at the price I thought it was the perfect opportunity.

The TE-20HH played great straight out of the box, I put on a heavier string gauge and tuned it down and the sound was great for what I was looking for. After a couple of weeks it developed a problem with the pickup selector and an electrical hum. I returned it to Thomann for repair, and as I was now writing a lot of stuff on it, ordered another one in case the repair took a long time, and also for when gigs start again, I will be playing this and want a back up.

Thomann actually sent me a replacement within a week! Happy to say, all my TE-20HH guitars played great straight out of the box, playability is great, the pickups are the dark sound I was after, neck is very nice and it holds the tuning well. The only "con" is that it weighs quite a lot, although between the 3 I've had, that has varied and my favourite weighs about 300 grams less than the others.

The first one I had was a toploader, but now they are through body, which makes changing the strings a bit easier.

I absolutely love this guitar and can honestly say it plays and feels like something much more expensive. If you want a no-frills instrument with its own sound and character, this is a no-brainer and I would buy it again even it was much higher priced!
Behulpzaam · Niet behulpzaam · Evaluatie melden
Rapporteer een evaluatie… 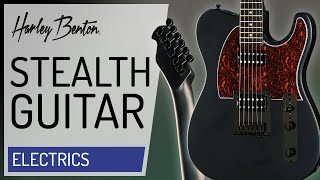 Toon alles
E-Guitars
Electric guitars are ten a penny and nowadays there are at least as many models and makers to choose from.
Toon alles
Guitar Setups
The range of available guitars and amps has never been greater than it is today, and a huge variety of sounds are easily accessible.
Test Conclusie:
Lees review