geluid afwerking
Great but not really mind blowing.
Daniele Lupo, 03.03.2021
I bought this set I had been looking at for a long while to replace the EMG 808's I previously had on my Schecter Hellraiser C-8 Special (26.5" scale). The EMG's were really muddy on the low end so I needed something to bring my guitar alive.

What follows is mostly my personal opinion, based on my gear, my taste and experience with the instrument, so take it with a grain of salt.

Pro's:
- Two Voicings + Coil Split gets you plenty of options to play with.
- The above applies to both cleans and overdriven tones.
- Lots of clarity on distortion compared to EMG's.
- Great cleans, versatile, warm, again, plenty of options at the ready.
- Alnico Neck, great for leads and warm round cleans.
- Ceramic Bridge, great for aggressive metal riffs and leads alike.

Cons:
- Do they deliver the best of both worlds (active/passive) ?
No they don't, it's for sure a great improvement and addition to the world of active pickups, and a very different take on active pickups if you will, but they still sound very much active.
- Yes, you do get a lot of clarity but not as much as I had hoped for.

Conclusion:
When I was looking for pickups, my initial idea was to get a set of Nazgul and Sentient pickups, but the price was well above 300 euros, while this Abasi set was 260 Euros. The 100 Euros difference surely played a role in my choice.
I had anyways been always curious about Fishman pickups and the hype around them, especially the Tosin Abasi models for obvious reasons, so in the end I went for this.

Would I buy them again?
Not sure, I was after the classic Meshuggah tone, and I didn't really get there at all. Obviously, I understand that part of my disappointment must originate in my guitar due to the relatively "short" scale for an 8 strings (26.5") and the mahogany body.
However, in all honesty, if I would have to choose again, I would have rather saved up a little longer and get the Seymour Duncan's I wanted initially.

Should you buy it ?
Well it depends on several factors as you can imagine.
They won't make miracles, your guitar (woods) is still a crucial factor in this equation, so scale length and woods is something you wanna keep in consideration.
Bottom line, if you have a guitar that already sounds pretty sharp on its own (swamp ash typically), AND, you are looking into refreshing and cleaning up your tone, AND, you like actives and want different sound option ready, then yeah, these pups will get you deliver greatly.
If you are looking for something that won't sound active, then this product is not for you, in such case you should just go for a good set of passive pickups.

They are fairly priced and deliver their promise, plus the price is kinda great.
Behulpzaam · Niet behulpzaam · Evaluatie melden
Rapporteer een evaluatie…

geluid afwerking
Installed them on FANNED FRET 7 STRING GUITAR
ChristianFer92, 05.01.2021
For some reason, the ones on Tosin's guitar sounds much beter but it might be him.
Something must be said about this pick ups:
The reputation they have come with a reason, This where my first set of fishman pick ups.
They where installed on a 7 string fanned fret guitar even when this pick ups are for 8 strings.
This pick ups are made of railings therefor are suitable for 7 and 8 string fanned fret guitars or for 8 string regular guitars.
The sound clarity its impressive.
Im tunned on drop G and it picks them chugs and low ends in general, PERFECTLY. They are completely Clear and produce a very pristine sound.
Being active pick ups, the sustain its wonderful and I have read that the battery lasting its about 300 playing hours which its quite decent.
Used with overrdive its a magical trip, but the clean tones are rich and solid, even when used as Split coil.
I can recommend this pick ups so much that I have bough another set for another 7 string guitar I have.
Very satisfied.
TLDR:
-VERY good pick ups
-Fit on 7 string fanned fret (soapbar-pickup style) cavity guitars.
Behulpzaam · Niet behulpzaam · Evaluatie melden
Rapporteer een evaluatie…

geluid afwerking
Really precise Pickups for 8-string
Jazzyk, 07.03.2021
I have Ibanez RGIX28FEQM which was equipped with EMG 808.
Well as I don't have anything against EMG the ones that were build in guitar were pretty bad sounding to my ear. With Fishmann it war instant uprade. Low F# string was sounding really tight and fat. I was about to sell the guitar before I got Fishmans, but they just gave new life to this guitar. It made me play the hell out of it. And the clean ! Oh man the cleans are so brilliant and beauty I couldn't believe it.

Pros:
Thight gain sounds
Beautiful clean sounds
They can be splitted to single coils
All hardware except for switch is in the box

Cons:
Could be a little bit cheaper

I would recommend them for everybody that uses 8 string guitar and wants to try some other pickups.
Behulpzaam · Niet behulpzaam · Evaluatie melden
Rapporteer een evaluatie…

geluid afwerking
Amazing, but need better qc
AlbertWoods, 08.02.2021
Bought this set for my 8 strings Ibanez Rg2228, love them.
The sound palette is incredible, you can achieve 2 different sound for every pup combination, the "thickest" is perfect for clean sounds on an extended range guitar like mine.

Unfortunally, after a year of use, I had to ask for a replacement, since during a battery change, the set died without explanation.

Thanks to the amazing staff at Thomann, I received a substutive set after a couple of weeks.
Behulpzaam · Niet behulpzaam · Evaluatie melden
Rapporteer een evaluatie… 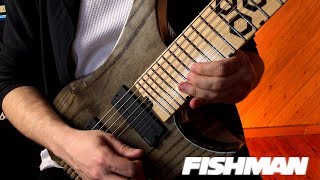 Toon alles
Pickups
There is nothing mysterious about the basic principles of the electric guitar pickup.
Test Conclusie:
Lees review