geluid afwerking
These feel just like Regular Ernie Ball Slinkys....but wait!
80 Proof Mojo (Band), 23.08.2018
I was a bit sceptical when I first tried these, (On a S/B Gibson Les Paul Standard) and by pure chance had recently fitted standard Slinkys to my spare Les Paul, so I had a chance to evaluate their performance with an easy A/B comparison.

The Paradigm won't guarantee they won't break, but they do say they last longer.
I bought my first set about 18 months ago, and my band plays about 3 or 4 gigs a month, rehearsing about the same, plus me playing at home. the standard Slinkys would last at best a month (I'm not Slash or the Edge who change them every night). With the Paradigm I am getting at least double that lifespan. the longest I've had them on my main guitars without noticing any detriment to the tone was about 10 weeks. To my ears they don't sound any different to regular Slinkys, they don't feel especially different, they just last longer.
Price wise? One pack works out just slightly cheaper than 3 regular packs, without the hassle of having to change them so often, so it's really "Swings and Roundabouts". Give them a go. You might be surprised.
Behulpzaam · Niet behulpzaam · Evaluatie melden
Rapporteer een evaluatie… 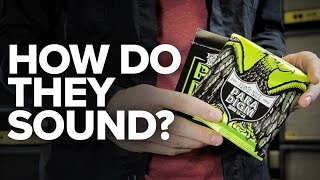