bediening features afwerking
It's All Good
Neil P., 21.11.2018
I just love tech that works and makes the seemingly impossible possible. The touch of genius here that nigh on nearly gets me aroused is the inclusion of on mic volume control. The control on the mic is not that precise in that the increments are a tad wide at times but no matter it is perfectly usable on the fly. Also it means you can use it as part of your vocal technique too if you so wish. Say you want to do something really intimate then you can just up the volume and do so without having to signal a sound engineer or make your way back to the mixer to tweak levels. Now you can do this on the mic and if you want to change from intimate to belt you can do so easily. Along with a decent mic technique this affords you great control. Great eh? Oh you don't have one do you! Well maybe you need one.
Sound quality is very good. For it's main use in a PA or karaoke the sound is up there with very good middle ground wired mics. It has a very extended response with figures quoted from 20hz to 20,000hz! As wide as you will ever need with ANY PA. It's a balanced sound too with no noticeable peaks or troughs. Very clear very flattering sound. The kind of sound that you would expect from a £400 wireless mic really.
Out of interest I tried recording with it straight into a Zoom R24. Sound was fair when put up against the Rode M3 or Audio Technica AT4033. It sounded somewhat processed but then it was a sound akin to what you would expect if you added a degree of compression and a smidgen of EQ. A good contemporary kind of vocal sound and therefore a good result for a mic intended (I think) entirely for PA type use. I like this mic very much and apart from the plasticky build I think it is truly great.
Behringer could easily have made it run off batteries but for some reason have decided against that facility. It runs off 5v so I rigged mine to run of a usb type power pack. The mic does transmit handling noise so if this is a problem for you bear this in mind. A nice touch is that when the battery is about to be exhausted the mic led flashes red. There is no fancy LCD screen or such so this is a welcome touch.
UPDATE:
I have been using these mics for a few weeks now several times a week and they continue to be brilliant. Behringer gear has greatly changed. Ultimately Behringer is just a name with real humans working collectively behind the scenes like in any corporation. The changes the collective have made recently really shows up in the products it appears. Don't be put off by the cheap price and what you think you associate with the name. Do yourself a very big favour and give these a trial. A wireless mic should sound good, just as good as a wired mic hopefully and behave itself. The industry standard for a bog standard gigging mic is the SM58. Most professionals know this. I would rather be handed this mic to sing through that is how I feel about its abilities. Of course the SM58 is bullet proof and that is another very important reason why it continues to stand the test of time. My brother goes out on the road with SM58's that look like they have been caught up in a drive by shooting yet they still continue to perform! If you can look after your mic this is a great mic to ply your trade with. Period. Happy customer here. FYI you may come across this same review on another site. It's my review and this purchase off the good folk at Thomann is due to me recommending this mic to my niece who sings too. As I said I like this mic I lot. N.B. I have had drop outs in two very challenging environments so I know it is not flawless but this is rare and I still highly recommend it.

UPDATE:
I owe it to potential purchasers to amend my review I think. I have used this mic now for quite some time and I can give more precise feedback. When using a single mic or with one of the pair switched off the mics on the whole work quite well and like I said have very good sound quality BUT...... I did a gig with a friend and we used both mics together. This was I admit pretty hopeless. They do not work together well at all. One mic is ok but the other had various interference and odd noises. If you read the manual it says that if you have a single mic (ULM300) you can only introduce another mic if they are quite some distance apart. This fact seems to be why they CANNOT work well together as a pair. It seems odd that Behringer know there is a very high possibility of interference from a pair but they have released it to the market and sell it anyway. For me it is a pain but not the end of the world. I primarily have the second mic as a backup really so it is useful in that regard. I warn you though not to rely on using a pair together in a gig situation when both are on at the same time. Do it and you may well live to regret it! It's still a fair mic but really for solo use only I would say.
Behulpzaam · Niet behulpzaam · Evaluatie melden
Rapporteer een evaluatie…

bediening features afwerking
Excellent price/quality
Ionlab, 12.06.2020
I have used these on numerous occasions mainly for speech/event announcements not singing. They are a little bit hot and feedback easily if you are not careful. And handling noise is audible, when putting the mic on a table or picking it up. But their range is excellent, have seen more than 30m and no dropouts. Battery life can't tell (I use eneloop pro rechargeable batteries and change them after each event) .
I have used it along an Alesis Miclink wireless and I experienced no dropouts although I was worried they may not work together.
I still prefer the Alesis Miclink Wireless for singing because you use whatever mic you want BUT for speech and when the speaker is expected to be further away I bring the ULM302 mic with me (because of it's superior range)
Behulpzaam · Niet behulpzaam · Evaluatie melden
Rapporteer een evaluatie…

bediening features afwerking
unstable
dooft11, 12.03.2021
Works well when i only use 1 mic
They interfere each other and general random clippings and pop noise when i have both of them on...
Behulpzaam · Niet behulpzaam · Evaluatie melden
Rapporteer een evaluatie…

bediening features afwerking
Good quality and value for money
Jith, 20.10.2020
I have used the ULM302 Mic on many occasions for singing. The quality of voice reproduction is good and has a good wireless coverage. However, handling noise and press of volume up/down buttons are also audible. Overall this deice has good quality and value for money.
Behulpzaam · Niet behulpzaam · Evaluatie melden
Rapporteer een evaluatie… 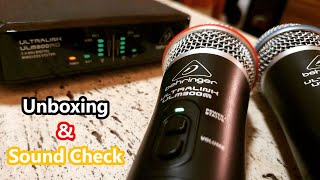 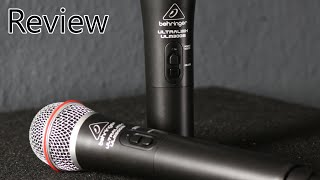