features afwerking
Plenty of space
Earl Langoustine, 25.05.2020
Great beginner case. Feels sturdy. Enough power if you're going to put two of the Behringer semi-modulars into it, and then get some other modules, while still leaving a bit of headroom on the power draw.

Doepfer modules might be a little deep for this case. For instance the Spring Reverb only fits in the top row, and its RCA cables stick even farther out the back, which limits where you can place it.

This case is very similar to the Tiptop Audio Mantis, but not only is it cheaper, it's also bigger. The Behringer case is 36U wider than the Mantis, slightly less deep on one side, and the power consumption is a little different. Encouraging to shave 80€ off the price though! The real sticking point for me when getting into modular was the cases. Do you spend 600€ on a case, or must you instead DIY something out of some rails and popsicle sticks? I'm totally a thrifty amateur dilettante, so no thanks! Certainly this product will help more people like me get into modular, along with these inexpensive basic modules / semi-modulars complementing each other, allowing you to get into some of the more exotic modules that exist.

UPDATE after 1 month: Still enjoying this case! We got the Gator GKB 49 bag to take it out. The modular fit perfectly into this well-padded bag, which has velcro fasteners to hold everything in place and a big pocket for cables. Recommended!

After purchasing a lot of smaller modules in the 2HP-6HP range (Erica Synths Pico line is fantastic), we have pushed our Eurorack Go case nearly to capacity. It still has more than enough power, but we're running out of nuts in the rails to screw modules into, and we filled up both bus boards and will need a flying bus board to eke out that last bit of space. Caveat emptor - modular is addictive!
Behulpzaam · Niet behulpzaam · Evaluatie melden
Rapporteer een evaluatie…

features afwerking
Great value
Freek101, 03.12.2020
A lot of hp for the price.
Case is plastic but does not have a plastic look to it.
It's called "Go" but I would not take this on the go with me, not unless they make a case or lid for it.
Behulpzaam · Niet behulpzaam · Evaluatie melden
Rapporteer een evaluatie…

Eurorack Case 2 Rows, each with 140 HP, Integrated bus board with 32 slots for Eurorack modules, Vertical mounting is made possible with the integrated stand, 96 Slide nuts (M3) pre-installed,... 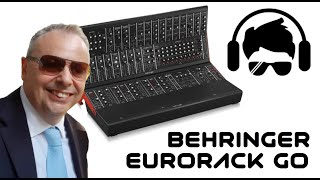 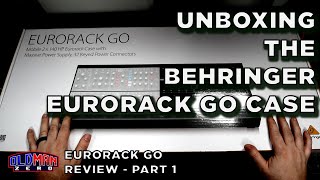