features geluid afwerking
Great all rounder - a step up from my old PA.
Neil9166, 16.11.2015
A great all round active speaker for our guitar band playing bars and clubs.
This is the second B212D that I have bought from Thomann - the first one was purchased as a stage monitor for our old PA system. I was immediately impressed with the audio clarity, its light weight and most of all with the 550w power output. Almost straight away we started using the B212D in the rehearsal room and on smaller stages, leaving my old 600w PA at home. The B212D is so easy the transport! Even with just one speaker it handled vocals well and easily kept up with the bass and guitar amps on stage.
This second B212D has made our old passive speaker PA obsolete. Because we now have sufficient power to give us plenty of headroom in the bars and clubs we play; our vocal clarity is much better; both FOH and on stage.
The moulded cases are robust and just shrug off knocks and scrapes while the speakers are protected by decent grills. The only design criticism is the lack of protection for the rear volume/tone controls which stick out and look vulnerable . Although we have not had a problem yet, I'm going to get buy padded covers to give more protection during transport - but it would have been nice if the controls had been more deeply recessed.
All in all a great product, good audio design and excellent power to weight. If you have an old passive speaker PA, I'd recommend upgrading to a pair of active B212D's.
Behulpzaam · Niet behulpzaam · Evaluatie melden
Rapporteer een evaluatie…

features geluid afwerking
should be an industry standard
Stephen5221, 02.01.2018
amazing little full range speaker, used for live bands as mains monitors side feed or disco, have plenty of bass which can be controlled and tweaked by knobs on back, have a warm yet powerful sound and plenty of volume, best keep level at around 12 o'clock to accept max level from mixing desk without peaking, roll the bass off a little when using as monitor as can be a little lively with respect to feedback, very robust and very tuff !! fearing the end after tumbling down a wooden staircase , suffering a couple of scuffs but no cracks or dents worked perfectly and has continued to do so, I have given a five star rating as for sheer performance for value cant be beaten, there may be crisper, cheaper, lighter models available but I can hold one and tuck the other under the same arm to open a door !! if you are the one carrying the P.A you will understand .they happily handle vocals and a few instruments as main speakers but do fluster a little with a bass guitar especially if you want to crank it .... get a sub its just common sense really . the grill is strong enough and has sustained a few dents in their travels and the rear knobs seem vulnerable but have never been broken just load with care and respect, they have been used as side fill as part of a 6K system and happily hold their own spot, they may not give the sound quality of a £600+ speaker but for a small band or useful utility speaker , that is both reliable and easy to handle they are hard to beat for the price
Behulpzaam · Niet behulpzaam · Evaluatie melden
Rapporteer een evaluatie…

features geluid afwerking
Very pleasantly surprised.
Struan, 15.05.2013
I could not believe the quality and punch from these. I bought 2 as backline for a keyboard playing piano, horns, organ, strings, clav and even electric guitar samples. The top end is very crisp, and the LF range is full without resorting to cheap boom eq tricks. I honestly didn't expect much from speakers so much smaller than the 450W cabs I was replacing, but they blew the old ones out the water. They don't shriek, I have never had them past half volume, and they remain clean and clear with plenty of headroom. They handle the dynamic ranges really well, and even at low signal and high output, there is no backgound noise - excellent SNR. Overall, very pleased with these, and even more so not to be breaking my back moving big cabs at the end of gigs. Great value for money and as usual, despatched with great efficiency and speed.
Behulpzaam · Niet behulpzaam · Evaluatie melden
Rapporteer een evaluatie…

features geluid afwerking
Powerful & Compact
Billie, 30.05.2015
Got this product just in time as the price went up significantly only a few days later. I use a pair of these as PA speakers with my band, as DJ speakers and as monitors when using a bigger rig. I ecko what a couple of other reviewers say about locking jack sockets. This would have been a better option. The spaeaker mounts work very well. I use them with Millenium speaker stands and they are very stable. They are slightly awkward as monitors. Its easy to crush the jack socket if the speaker is moved but the moulding of the cab to facilitate the use as a monitor is a real bunus. DJ wise, if I had bought them soley for that use I would have bought the 15" versions but if you dont want that kind of size or weight these are excellent for such a small cab size. I would definitely recomend them at the old price but since the increase they are closer to the price of some better cabs. That is something Beringer should consider
Behulpzaam · Niet behulpzaam · Evaluatie melden
Rapporteer een evaluatie…

Choosing a PA System
Whether youre a fan, a promoter or a performer, the refined craft of live sound is vitally important.
Gratis downloads 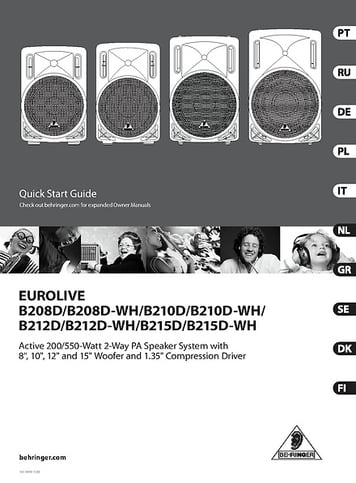 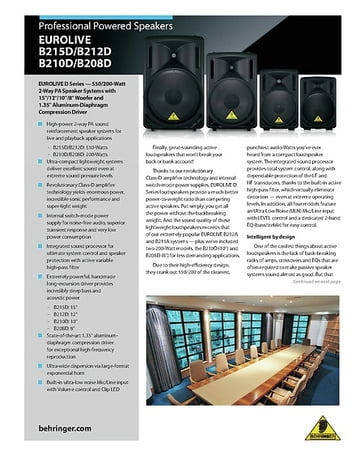 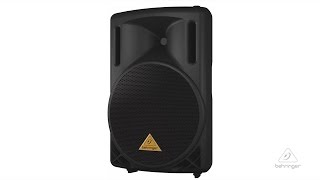 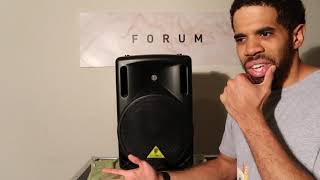