bediening features geluid afwerking
Powerful, versatile and affordable
Musley, 13.05.2021
MicroFreak is my first hardware synth - before that I was using VST's but I don't feel like I want to go back.

What's great about it is that it let's you to choose what type of oscillation do you want to use and shape the general sound and then real fun begins with matrix mod, that simply put lets you define the relations between the components of the synth. You can create harsh or smooth basslines, drums, ambient pads, arpeggiated sequences - versatility is what makes it worth checking out.

Moreover it has built in sequencer, that lets you to use it either as a step sequencer or record in real time. There's also a possibility of randomising sequences via slice and dice function.

Keyboard might feel a little weird at first, but it has it's pros - it features aftertouch, you can assign it to control other parameters depending on how you use it, it has hold function that comes in handy while playing live or tweaking with sound texture. It's also super responsive.

The amount of functionalities might seem a bit overwhelming for a beginner, but there are a ton of instructional videos on Youtube that will help you to get through the learning process, Arturia is publishing resources as well and they are still supporting the synth - it had free firmware update in January 2021 that introduced new features. Upgrading process is quick and seamless via dedicated software that you can download from their website. Software also allows you to tweak certain functionalities but I didn't feel the need to make the adjustments yet.

Since I'm a fan of digital gear, I'm really fond of MIDI functionalities (works great when paired with a sampler - Elektron Digitakt in my case) and possibility of saving your own presets. If you create an interesting preset but you want to experiment a little bit, you can always save what you adjusted as a new preset, without overwriting the previous one. The OLED screen might seem a bit small at first but it does exactly what it needs to and helps to navigate through the menus without any issues.

The way the MicroFreak is designed is also very well thought out in my opinion - once you get a hold of it (I totally recommend checking instructional videos or reading a manual), the whole interface gives you a lot of information by just looking at it thanks to all the leds it features which comes in handy while playing live or jamming with friends.

I used it both for music production, jamming and on stage and I'm very happy with how it works and how quickly you can apply all the changes to shape the sound depending on circumstances (I love that it features responsive lowpass, bandpass and highpass filter, so you can quickly adjust it depending on your needs). Moreover even if you think that certain sound that you came up with is not satisfying, try pairing it with effect pedals for completely new flavors - I totally recommend using it that way!
Behulpzaam · Niet behulpzaam · Evaluatie melden
Rapporteer een evaluatie…

bediening features geluid afwerking
A best of this scope, really, for this price?
Zivca78, 29.04.2020
First of all let me say I am dealing with synths for more than 30 years.
I am professional music producer and audio engineer, and bulk of my work was always directed towards music synthesis, be it music composing, sound design or just pure love for the machine.
This synth is many types of synthesis packed into one. With 2.0 firmware update, even more features are offered, such as additional oscillator and scale mode. This synth might be too much for a beginner but only because of so many features, but they would witness first hand all classic synthesis they have been reading or being thought about. So entry level can and will enjoy this synth.
Features I love - versatility, cycling envelope, matrix, arp and seq, and so many great things under a hub of this little beast.
Filter is extremely good piece of analog gear and its a shame external devices cannot be connected to use it.
Front panel misses arp gate, it is back in the utility menu, but that is just me asking for too much. Just like connectivity - this thing does everything it is supposed to do.
Great and fun feature, spice and dice is there.
Keyboard is pressure sensitive, and i love all additional settings you can assign.
Think about any, literally any synth with so many options that actually has analog filter!
And to top it all, this esoteric finish/design is making me happy to have this device purely just to look at it.
Behulpzaam · Niet behulpzaam · Evaluatie melden
Rapporteer een evaluatie…

bediening features geluid afwerking
My first hardware synth
1TooZz, 11.10.2019
I'm used only bunch of good VST before, i'm totally satisfied with them. But once i wanted to have a not virtual, a "real" instrument to have another workflow style, and, therefore, different paths thinking of creativity. Portability was a big criterion too.
After long researching of some variants, microfreak had becomes my choice. I had bunch of fears and skepticism about it, but price of the synth is a very tasty.
Also it's hard to estimate all possibilities with only dry sound. I was thinking, good additional effects will make the sound very awesome, but wasn't too sure. Sound demos, what i found in internet almost all was with dry sound or slightly slurred to me.
When i received and try it on my own- all good expectations were confirmed.

If you want affordable, little, fun and interesting digital synth- the Microfreak is a good decision, i think.
But if you want just only features, and you not obsessed about possession of real instrument, or about unwonted workflow; or you don't like digital sound- maybe it's can disappoint you.
Behulpzaam · Niet behulpzaam · Evaluatie melden
Rapporteer een evaluatie… 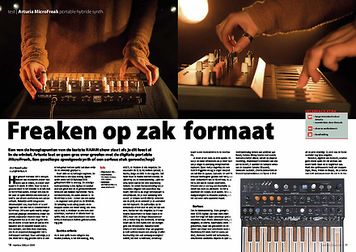 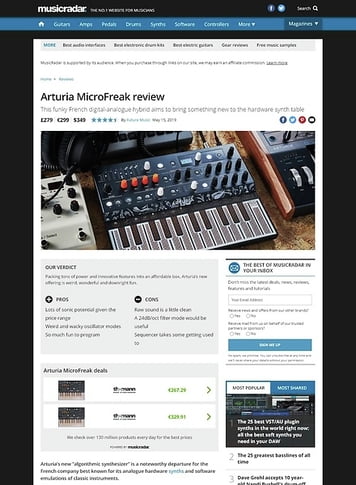 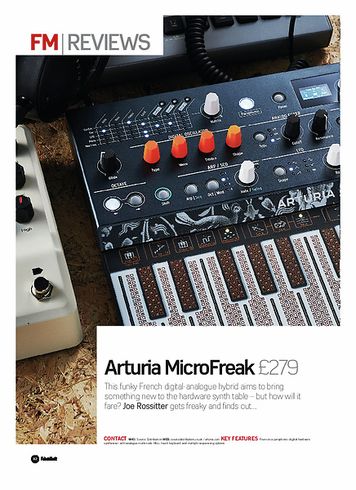 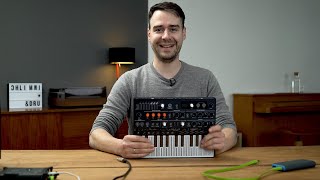 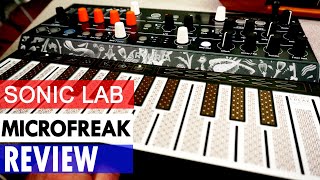 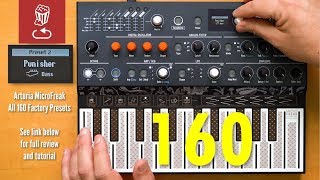 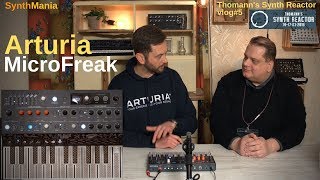