Who doesn't sweat behind the drum kit. It certainly can't hurt, to pack an extra T-Shirt for your next gig. And that is exactly what you get for free when you buy this Zildjian cymbal. Simply put the cymbal in your shopping basket - the free T-Shirt will be automatically added.

suono fabbricazione
And now for something completely different !
Robert814, 06.07.2014
I would never have chosen anything as quirky as this as a main ride (It would work though), but as a second ride cymbal it's like having an extra gear in the gearbox. The 19 inch size means higher pitch, which I like. The A series usually means a low resonance, which I don't, but the rivets/sizzles perform well at transferring this energy into a nice wash. I was rather wary of rivets, as often they are added by the player to change a sound which has not been pleasing. These are well balanced and the overall result is good. The hammering is very light with small dents, with the lathing also very fine and covering the whole surface right up the bell. This would be expected to produce less wash than deep heavy hammering. The 3 rivets produce the wash to just the right level and it is quite a strange experience playing a smaller ride like this and being able to hit it as hard as I like with a consistent wash. There is perhaps less scope for varying the sound (less expressive) than other rides, but as a second ride, with the ability to change around between cymbals it is a fine bit of kit. I've stepped up an (extra) gear. Having said all that, if the rivets are silenced with a small strip of tape, then there's a whole different set of unique sound. Update 18-09-15: Having played this ride for over a year now I can see how it was Armand's favourite! Although 19 inch, it is actually about the same pitch as a 20 inch. The sounds achievable are very wide ranging (My initial thoughts were wrong) This is a very well designed and tried cymbal. Armand really knew his business! - Well, he would, playing them and running a whole factory!
Utile · Non utile · Segnala un abuso
Invia recensione... 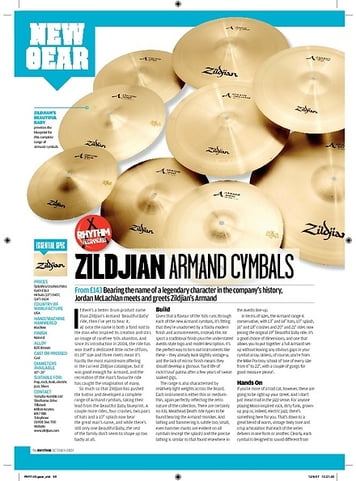 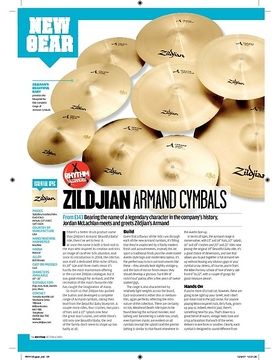 Mostra tutti
Cymbals
The choice of cymbals is just as important as the choice of drums within a kit. Lets take a closer look.