There is a considerable overlap between blues and rock, both stylistically and sonically, so these two setups have a lot in common. The classic rock sounds we have come to know and love were created not just by the great guitar players, but by the pioneers of electric guitar and amplifier design, so it’s no surprise that the big names – Fender, Gibson and Marshall – will dominate this article.

For many, the choice of guitar for this very broad style is determined by a simple question - who do you want to sound like? The ‘big beasts’ of Seventies rock are all closely identified with their own particular choice of main instrument, from Page and Kossoff’s Les Pauls to Gilmour and Blackmore’s Strats. Before the advent of the hybrid designs popular with today’s metal players, output level played an important part in this decision - Gibson guitars were almost all equipped with humbuckers, and their distortion-friendly higher output produced a bigger, heavier sound than the lower output of a Fender, especially in the days before the invention of the master volume control. This pattern has persisted, even though modern preamps and FX pedals provide plenty of gain for single coil guitars. Most of the other successful guitar designs originating from the Fifties to the Seventies have found their way into ’classic’ rock, including the Telecaster (Keith Richards), Rickenbacker, ES-335 and SG. Supercharged designs with high-output humbuckers are usually best left for heavier rock styles.

The central design goal of most guitar amps is to perform well in the style under discussion. Again, the choice is ultimately a matter of taste, and which particular ‘school of rock’ you draw inspiration from. If there is such a thing as an archetypal rock amp, then it’s probably a 100W valve head with a 4x12” speaker cab, but even this class is rather broad. The classic rock sound is built on a warm and organic-sounding amount of valve overdrive that stops short of the ‘face-melting’ distortion of heavy metal - be aware that some amps are meant specifically for metal!

Both combos and stacks are valid choices here - stacks tend to provide a firmer bottom end which is great for chugging rhythm parts. Another consideration is that rock sounds are often described as being either British or American - almost all significant amp manufacturers are located in one or other of these countries, and each side of the Atlantic brings a slightly different slant to the rock sound. For many players, the big names of mainstream amp design are Marshall, Fender and Mesa-Boogie, but there are dozens of others vying for attention, and often producing excellent amps in the process.

Many classic rock sounds do not use any effects at all, unless you count overdrive. If Free’s ‘All Right Now’ is your yardstick, then all you need is a Les Paul-type guitar and a Marshall stack. But most players have a few favourite effects-based sounds - these tend to be subtle flavourings rather than extreme treatments, and the main pedals in the Boss range for instance provide a very good guide to the possibilities here - phasing, chorus and flanging are probably the most common rock effects, along with the perennially popular wah-wah pedal. 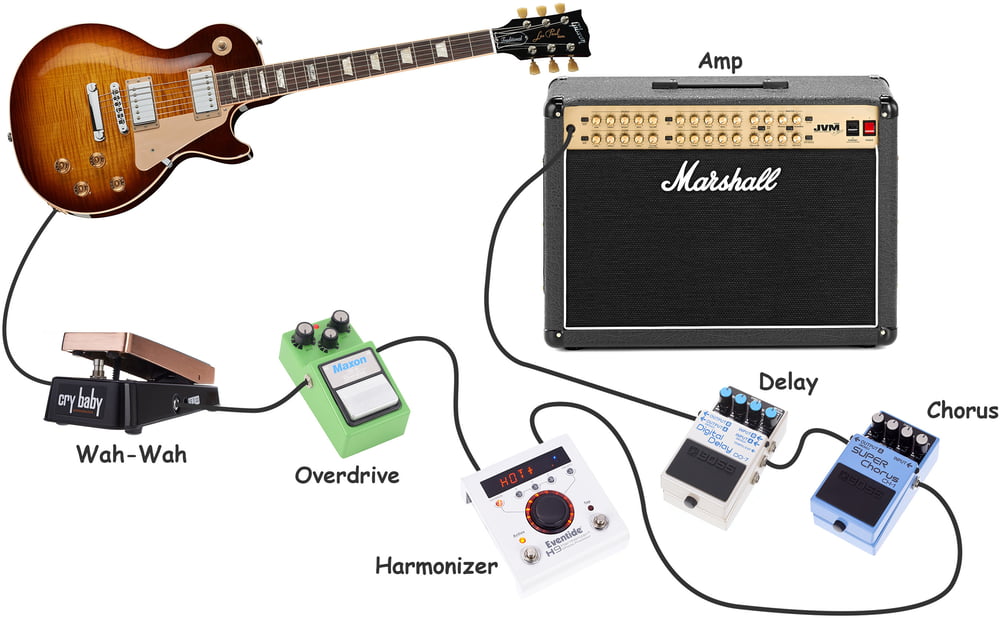