While the blues can be played on just about any guitar, there are a few clear favourites. The first is the double-cutaway semi-acoustic. This type of guitar originated with the Gibson ES-335, which is still generally considered by many to be ‘best in class’. These guitars are usually equipped with humbuckers for a warm, fat tone (use the neck pickup), or biting lead at the bridge.

The blues in its many forms is so central to the history of the guitar, that most other major guitar types can be identified with a particular player or style, from Fender’s Stratocaster (Stevie Ray Vaughan, Robert Cray) and Telecaster (Albert Collins) to Gibson’s Les Paul (Gary Moore, Peter Green).

Most blues players prefer amps which preserve the subtleties of the guitar’s natural tone. Many classic blues sounds inhabit the area generally known as ‘crunch’ – that is to say neither fully distorted nor completely clean. Full distortion tends to reduce the guitar’s dynamic range - clipped waveforms are by their nature compressed. Crunch can have quite the opposite effect, as quiet notes tend to sound relatively clean, while playing louder produces more distortion.

Valve combos are popular with blues players who require a degree of subtle, creamy tube distortion, but generally don’t need the volume or want the big bottom end of a stack. A 1x 12” valve combo at high volume is capable of both a wide dynamic range and a broad range of tones.

The blues is not a style characterised by the heavy use of effects. Subtle nuances of tone and dynamics will often be lost in the wash of sound produced by effects popular with rock players, such as delay and chorus. Many world-renowned blues players have setups consisting of little more than a guitar, amp and cable.

Overdrive for blues is achieved using the amp itself, a favourite pedal, or a combination of the two. In this situation, the pedal is usually used as a signal booster - rather than producing distortion itself, the it raises the guitar’s output to a level where distortion is induced in the amp.

Certain effects do lend themselves to the blues style though, particularly if a crossover into ‘psychedelic’ rock is sought. ‘Wah-wah’ has been particularly popular since its possibilities were first explored in the late Sixties by Jimi Hendrix and Eric Clapton. A wah pedal is essentially a sweepable mid-frequency boost. When placed before overdrive in the signal path, the overall volume boost is often enough to increase the amount of overdrive. In this position, the tone is given a degree of ‘grunt’, compared to placement in an FX loop, where the sound is smoother as the amount of distortion is predetermined by the preamp.

The psychedelic blues boom of the late Sixties was infused with another characteristic sound - the Leslie speaker cabinet. The Leslie’s speakers are not in fixed positions, but instead mounted on motorised arms which rotate the speakers to produce a distinctive ‘watery’ pulsating effect. Apart from their great sound, Leslies are famous for being big, heavy and full of moving parts which can easily malfunction if not maintained very carefully. Fortunately, there are now many pedals which produce similar effects, such as tremolo and ‘vibe’, as well as dedicated Leslie simulators. 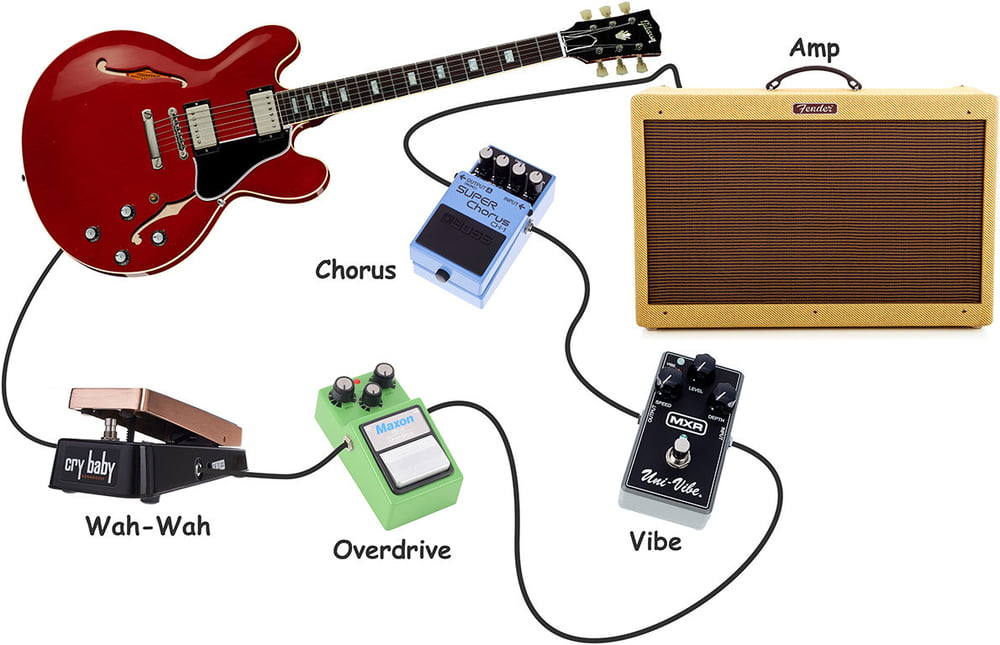