It seems like the reason this bundle is exists is a way to charge a lot more money for a wired remote rather than just selling it on it's own. I bought the bundle expecting there wouldnt be a way to get the same thing cheaper elsewhere but after some research there are 3rd part alternatives for the remote. I can't comment on the quality of those but had i known about them i'd have tried that first.

The product itself is decent quality, so i cant complain about that. i thought maybe the remote would be awkward to use if you couldnt see your h6, but the remote itself has leds on it to display what mode the h6 is currently in. So its veru useful if you are say operating a boom mic with this remote straped to the pole, while recording with the h6 setup as a stereo mice or a second shotgun using the shotgun mic adapter for the h6. although the remote has no mounting options built into it. a camera thread or a place for a velcro stap on it to mount it to a pole/wrist would be useful but it has none, thats going to require some modifications added yourself if you want to do that.

The wire on the remote does seem a little too thin and seems like it could be easily brokenif its treated roughly. But the design is clearly meant to wind away and be compact, hence it being so thin. i'd have prefered if the remote had a jack connector itself and you could replace the wire but the extension in the bundle could act as a break away if anyone trips on, or snags the cable.

the cables are okay quality, the power adapter is fine, althought a uk option for the bundle would be better, i replaced my power adapter from this set with a good quality phone charger with a uk plug.

Given that i think these items really should be included with the h6, the price is a bit steep to pay even at thomanns decent price reduction, so i'm knocking it down in "quality" . Also i'd expect a much more heavy duty remote for this price, even more so at the "full price" of 70 euros the wire on the remote would feel like a complete joke.
Helpful · Not helpful · Report
Report rating…

Send report
handling features quality
Excellent set
Jay237921, 16.06.2018
I bought the Zoom APH-6 couple of months ago from Thomann to complete the bundle of the Zoom H6. the windshield is extremely important and does its job really well. I recommend this set
Helpful · Not helpful · Report
Report rating…

Send report
handling features quality
Essential but overpriced
nikthegreek, 10.08.2020
Honestly I never used the remote. The fact that is not wireless it's kind of a bummer. Also the quality of the remote is very low. I bought the bundle exclusively for the windshield which is essential and you can't record anything outdoors without it. So I guess it is an overpriced bundle. The cables are fine, the windshield works well and the remote is useless.
Helpful · Not helpful · Report
Report rating…

Send report
handling features quality
Not quite what I had expected
Audio guy, 26.01.2019
It was only upon opening this package that I realised the "Remote" was not wireless but instead has a short cable for you to attach to the recorder. I think Zoom could have easily put in a little in-fared sensor to make this wireless. Kind pointless to me otherwise.
It would have also made better sense to provide someone living in Ireland with the UK plug instead of the standard adapter Thomann provide for free. This makes the already bulky equipment less portable.

It was quite useful being given the spare usb cable, these are rare in Ireland for some reason!

The main feature of this pack was the windshield for me, it preformed well most of the time unfortunately wind can still be heard from time to time which considering the conditions I have used it in was very surprising, none the less it does help a lot.
Helpful · Not helpful · Report
Report rating… 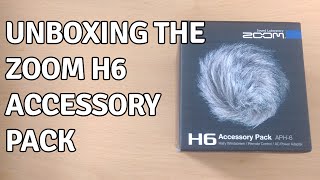