To start off and make it clear, my unit hasn't seen any road use, but I've been using it for 9 years now and still works. (unlike my old Roland FC-200 that broke a trace on the PCB at the power connection).
So I cannot comment on hard use, but the GCP has a good reputation for touring players

-Accepts external power or phantom power.
-Controls up to 8 midi capable units on individual midi channels AND up to 4 GCX units.
-Switch 10 (PGM mode) or 4 Presets (Instant acces) per bank.
-in 'Instant Acces' mode, assign up to 8 Continuous Controller commands.
-Set individual presets per unit (i.e.: GCP preset #4 is preset #1 on your preamp, but #8 on your FX unit) .
-On the CC commands, allow momentary or latched operation and allow different on or off status per preset.
-Allow expression control via Midi (optionally with a foot pedal).
-Added bonus is that the GCP prevents "Midi PGM repeat", i.e.: If you happen to hit a button twice, it will not retrigger the preset, which could result in 'hiccups' (For example: A delay resetting).

What can it NOT do:

-Connect to a PC via USB.
-Switch Non-Midi amps (unless via an optional midi-controlled amp switcher).
-Allow more than 8 different CC commands.
-On that same note: does not exclusively allow CC operation.
-Make coffee.


What does it switch in my setup?:

-1 Voodoo Labs GCX audio Switcher.
-4 Preamps.
-2 Fx-units (1 using PGM changes, the other CC changes).
-1 Power amp.
[Note: I use a Miditech MIDI thru 7 to keep Midi signals from degrading, this is not a flaw in the GCP, Midi signals simply degrade the more units they go through,... and I have 8!]

How does it switch my setup?:

Oh boy, let's get down to business,...
I use it in Instant Acces configuration, there are more than enough banks (36 with 4 presets each) to address the preamps and FX unit that have more than 4 presets available.
PGM changes presets on my preamps and 1 FX unit.
The CC's I mostly use for my Lexicon MPX-G2 since the PGM changes lag on that unit (flaw of the lexicon, not the GCP!), but CC changes are immediate, so I can switch effects on and off without dropouts.
The GCX loops for the Preamps are set per patch, but 1 cc button is set up to switch the other FX unit in/out of the signal path.

This configuration let's me do mostly what I want with my gear.


It works flawlessly and switches fast, buttons still feel solid, LCD is clear and easily readable
programming is pretty easy once you get the hang of it, In the menu's a lot of options are clear as to what unit you are addressing.
Not saying this will be the simplest thing to program, but it could be much worse.

And now, the shortcomings:

-8 maximum CC commands -Overall!-
I'd love to have seen this be set per patch, giving me some more flexibility over which unit I can control in which patch
Seeing that the GCP can control up to 8 different units, this can become a very limiting factor

-No USB/MIDI editor
To be fair, the GCP is of an older generation, but it makes programming (which you have to do with the pushbuttons) somewhat clunky
Of course if your PC has a MIDI interface, and you're savvy enough to know how a basic midi-editor works, this isn't such a huge issue

-Lastly, a "Head's up" for those mating the GCP with a GCX.
Voodoo Lab recommends you connect the GCP to the GCX first in line.
For this you need to use a 5-pin MIDI cable
...Well, I found out the hard way that 5-pin midi cables do NOT always have all 5 pins connected! (in such case, only pin 2, 3 and 4).
Luckily, prior to acquiring my GCX, I used 1 of my preamps to power the GCP with a 7-pin cable (and have found no negative effects not having the GCX been the first controlled by the GCP).

Well, not from personal experience, but browsing around on the Thomann site, only 1 other unit comes to my attention that might be able to compete with, or perhaps even surpass the Ground Control Pro:

Send report
features quality handling
This board makes anything possible.
benash, 16.06.2018
So there many different options on the market today for being able to control your effects.

This just seems to be one of the best options out there. Teamed up with the GCX Switcher, its a match made in heaven.

So I don't like big pedal boards. Never have. In most venues ive played in, your limited on space, so that last thing you want is to not actually be able to fit your board on the floor in front of you.

The ground control pro does away with that problem. I literally have just this on the floor in front of me and thats it. Its powered by phantom power from the GCX unit which means instead of having 3 jack leads, and a power cable running out the front. I have a small midi cable and Im sorted.

I also sing a lot. So when changing paths, I don want be tap dancing to turn the delay and boost on, plus a bit of reverb. I just have to hit one button, and it all comes on. So easy and works every time.

Only negative i've had with this board is, over time the buttons wear out. They can be replaced though, and relatively cheap too. Just make sure you get someone who's qualified to do the work, otherwise you'll end up in a pickle.

Send report
features quality handling
Midi foot controller
SO1993, 13.10.2017
Does what it says, used with the GCX you can control all of your pedals with one tap of the foot, so no more tap dancing.
its quite a size, but its built like a tank and never failed me once.
Helpful · Not helpful · Report
Report rating…

Send report
features quality handling
King of all controllers
pd4life2000, 15.11.2014
Well I would find it hard for anyone to argue with this as being one of the best controllers on the market.

I have mine hooked up to an Engl Savage Midi Box, GCX switcher and G-Major 2. I can do several things just in one button press.

It has stomp box similarities and can be set to act as a stomp box mechanism when used with an audio switcher. Just plug in your pedals and assign each pedal to once button on the GCP and off you go.

I use mine in an 8/4 mode, where I use the 8 switches to control my sounds from the GCX audio switcher. The other 4 buttons I use to program in my grouped settings.

E.g. on button 1, I have a distortion setting from my amp, a G Major 2 delay effect and a noise gate from my decimator which kicks in.

Effectively it can control several devices at once all by midi and then still has room to allow stomp effects to be setup.

Compatible with the G Major, POD's, Kempers and all midi enabled devices, it's definitely something worth investing in, especially if you don't like tap dancing live!
Helpful · Not helpful · Report
Report rating… 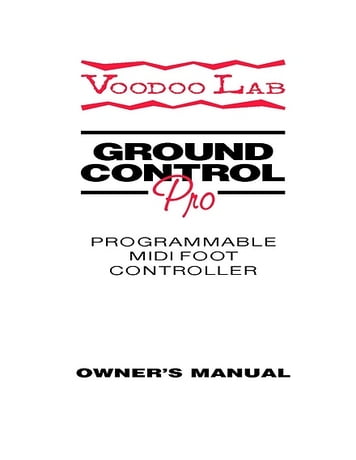 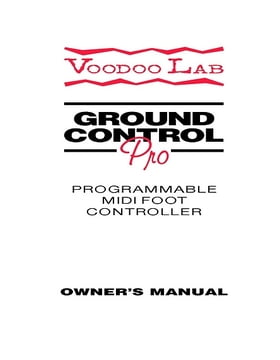