The original 1989 version of the Sansamp Bassdriver DI from the New York-based amp and effects pedal company Tech 21 has acquired a reputation as a virtually indispensable tool for bassists. Essentially a floor pedal which simulates the authentic sound of a tube stack with the help of an analogue transistor circuit, this unit combines a cleverly designed preamp and an extremely effective overdrive section with a fully-fledged DI box and was considered the “ne plus ultra” for almost 30 years. Over time, however, bass players have come to expect more and more in terms of sound, which has given rise to a number of requests for special modifications. These have finally been taken into account with the release of the long-awaited upgrade, the "Bassdriver DI V2", which retains all of its predecessor’s best features while adding some very useful new ones. The most important of these is probably the midrange frequency controller, which upgrades the EQ section to a full 3-band version. 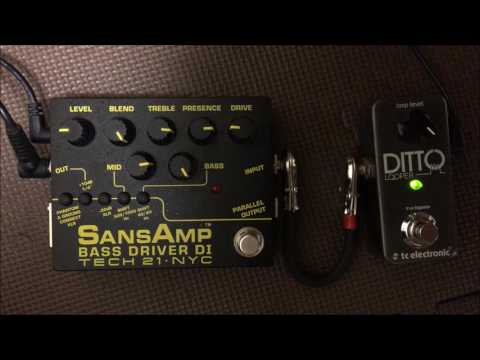 A complete preamp in pedal format

The Sansamp Bassdriver DI is a so-called bass preamp DI box. The DI box converts an unbalanced bass output signal into a balanced signal and sends it to a mixing desk or other recording equipment via an XLR output. The 0 dB output gain can optionally be lowered by an additional 20 dB in order to adjust the level to microphone preamp input gain if necessary. A ground lift completes the DI section. This pedal is capable of much more, however: It performs like a hybrid combination of a bass preamp and an overdrive pedal. Using the unbalanced signal from the output jack, the Bassdriver DI V2 can either be operated like a regular effects pedal between the bass and the amplifier input or, alternatively, it can be run in the amplifier’s series effects loop. When used as a full bass preamp, the Bassdriver DI V2 can even drive a power amplifier, and the option of raising the jack output’s signal by an additional 10 dB is a useful feature here.

The pros’ choice for decades

The Sansamp Bassdriver DI V2 is considered to be a “must-have” among professionals for very specific reasons. The 100% authentic tube stack simulation, based on a fully analogue circuit housed in a remarkably small and virtually indestructible pedal, is still unrivalled to this day. The new midrange controller, which has been included in the new version, now makes almost any imaginable sound possible. Furthermore, the user can choose between two central mid-control frequencies (500 Hz and 1 kHz) and can likewise choose whether the low frequency control should be centred around 40 Hz or around 80 Hz. The smartest feature of this preamp is the way in which it integrates the tube amplifier emulation. The proportion of the tube circuit in the signal path can be set in parallel from dry to full wet using the blend knob, while the intensity of the overdrive can be adjusted from subtle grit to full-on distortion using the separate drive knob.

For over 30 years, the American company Tech 21 has been catering for the needs of guitarists and bassists worldwide. Their very first product, the legendary Sansamp, quickly became an industry standard and featured in pretty much every studio in the world. To this day, the Tech 21 team in New York City continues to develop, design, and produce innovative products for guitar and bass, focussing particularly on tube amp and speaker emulations. Their portfolio has expanded steadily over the years, most recently with a new range of preamps, single effects, and multi-effects. The many signature products and the long list of famous endorsers are a clear testament to the quality and popularity of Tech 21 equipment.

Have your own sound with you at all times

The secret behind the very convincing tube simulation of the Bassdriver DI V2 is its skilful use of a speaker simulation that only comes into effect within the tube emulation circuit. As a result, overdriven and distorted sounds do not sound harsh in the same way as they often do with regular overdrive pedals. Instead, it sounds as if your bass is being played through a tube amplifier and speaker cabinet. Interestingly, the speaker simulation does not cause interference, even if you are using the Bassdriver DI V2 as a normal effects pedal and running it into the front end of an amplifier. This means that if you want to spice up a solid-state amp with a classy tube sound, you can do so without any tubes – all 100% maintenance free. Since many modern stage monitoring solutions favour in-ear systems, the Sansamp Bassdriver DI also offers a great stand-alone solution that lets you perform entirely without an amplifier.

T
Ok if that's the kind of sound you want. TrEr 08.12.2019
So I finally got around to trying this somewhat legendary effect/DI. I have very mixed feelings about it.

If this is 100% the sound you want, sure it's great. If not I think it's much too expensive for what you get. It's a fun little addition to my bass&studio gear collection but I honestly don't think I will be using it as much as I thought. I actually like the drive characteristics a lot but I wish there was a way to disconnect the speaker simulation. It's got that hollow Ampeg 810 vibe that I'm not a big fan of. I would probably use it a lot more if I could have used it as a regular stomp box/preamp for the overdrive/eq but without the speaker sim.
handling
features
sound
quality
14
0
Report

b
I love this thing! boynamedlen 30.03.2020
Before getting this, I had used a Zoom B3 as my main practice tool/headphone amp. I had come to a point where I knew what kind of bass tone I like and figured that a Bass Driver would get me there. Also, I like the possibilities for live use, even though I don't really play live anymore. I was also considering a Darkglass Alpha Omega, which had just come out at the time, but I was worried that it would be less versatile and too modern sounding. The Bass Driver seemed like a safer choice, and more of a solid platform to build on.

Great sound, especially if you like more vintage tones. Built like a tank. Flexible in use. 10/10 would recommend!
handling
features
sound
quality
2
0
Report

JG
Great Bass DI Josh G. 05.09.2016
After debating between a few options and seeing the Tech 21 Bass Driver DI V1 be discontinued on Thomann I ended up opting for this one. I'm thoroughly pleased I did select this one as the added new mid and bass shift buttons have proved very useful. As a studio engineer I am mainly using the Sansamp as a great clean DI signal that beefs up the guitars direct sound. Having the options to boost specific frequencies is great when preparing the tracks with a mix in mind. IE placing the bass frequencies against the kick drum drum frequencies and giving each instrument a space in the mix.

The drive of this pedal is great as well and blends perfectly with my guitar sounds i'm getting. Which again helps the the overall sound of my productions. The pedal itself is solidly made and could not fault it. The output options are great as you can completely bypass the pedal with the parallel out put and run two signals, one clean and one distorted if you wished. Would 100% recommend to any bass players or studio engineers.
handling
features
sound
quality
3
1
Report

K
Brilliant! Kidb 14.01.2022
Great service and brilliant product. Packs a punch with all the options and have had a lot of fun playing around with this
handling
features
sound
quality
0
0
Report