47 Customer Ratings
4.8 /5
Great but not perfect
Peeter K., 19.08.2014
So, as a practicing live sound engineer, I decided to exchange my Yamaha 01v96v2 for the DL1608 in order to get rid of the heavy lifting of multicore cables and the dirty job of rolling them up after a gig.
I have done three gigs with it so far (same group every time: vocals, string quartet and spanish guitar) and the impression is generally very positive. Saves a lot of time on smaller gigs by not having to set up a FOH area/booth. Just leave the mixer on stage, connect everything directly into it and just take the iPad and go.
I have been using a Zyxel router for the wireless control and it has worked pretty darn well. Only on the first gig I lost the connection while moving to the back of the audience but that was just for a moment and the drop out didn't have any effect on the sound. So, by the topic:
Handling:
Small, compact, easy to carry. The only handling you'll really be doing with the mixer itself is adjusting gain and headphones level with some fairly standard knobs. However, I feel that the turning of the knobs should offer a bit more resistance but it's not a big concern. The iPad app handles very well. Very responsive, intuitive, and manages to give you a lot of information at a glance. Since you can only view 8 faders (and input meters) at once, it's not quite as comfortable as having 16 physical faders at your disposal at all times, but it's very good, considering the restrictions of the iPad screen size. But contrary to the small loss in fader operation, the eq, compressor and really any other control interface is a joy to use, the touchscreen really enhances that stuff.
Features:
This is where the mixer's biggest shortcomings appear. First, no internal group buses. Yes, you can physically patch one using an aux send, but for a stereo group you will be giving away 2 channels and 2 aux sends. Same with stereo inputs for a cd player/stereo keyboard etc, although that's really ok, the aux sends are more valuable than the input channels. Also, there are two internal stereo effect channels, but for some reason, on is fixed for reverb and other for delay. On my three gigs, I would have killed for 2 reverb channels, albeit I think that for most occasions, one is fine. Of course, you can always opt for an external fx processor, but again, you'll lose 2 aux sends and 2 inputs. In conclusion, it's would be a hell of a lot versatile, if it had 2 more aux sends, if both fx channels were assignable to either delay or reverb, internal group buses and a stereo in, or at least six channels with xlr/trs combo inputs instead of the current 4. Other than that, it has got everything: compressor and gate on every channel, hpf, 4-band eq, graphic eq, mute groups - the whole nine yards.
Sound:
No complaints here, sounds excellent. The effects can be tweaked to sound very good too.
Quality:
Generally well made. The plastic feels a bit cheap, but with a case and the price point, a minor concern.
All in all, it's a great digital mixer for a good price that serves most of my gigs very well. With up to 16 channels, you can probably mix most standard-size bands with ease. I suppose you could always extend it with an analogue mixer, but that route obviously has it's limitations. Certainly recommended! I only wish they'd make a bigger one, 2410 for example.

Send report
handling features sound quality
So many features I haven't even discovered them all!!
LizCJ, 08.02.2019
I love this desk so much! There are so many features that I know I haven't even discovered yet, but it's easy enough to set up (with a little help from technologically minded friends.
Plenty of channels, we use it in our wedding band and we connect the dj decks to it afterwards and it works perfectly!! Easy to mute specific channels on the ipad, and it charges the ipad while it's plugged in.

Just be careful of which ipad you use.
And if you want to use the ipad wirelessly, you need a router!!
Helpful · Not helpful · Report
Report rating…

Send report
Mackie DL1608
FergalC, 30.03.2015
If you already own an iPad this is the way to go. Huge amount of features including full gates and compressors for 16 mic channels.6 way monitor mix as well and of course the option to mix remotely via wireless router and let each band member sort out their own mix via the iPhone or iPad.
Helpful · Not helpful · Report
Report rating…

Send report
revolutionary
Philippe599, 23.04.2014
All the Mackie desks I've had have been incredibly sturdy and reliable, and this is no different. The 1608 is incredibly small and light. If like me you're sick of carrying heavy gear around then this is the answer. 16 channels, 6 auxiliaries (Hooray!, why do desk manufacturers only give you 2 auxiliaries on most desks?) Reverb/compression on every channel. With an airport express plugged in you can control it so easily from your iPhone/ipad and check the mix from the back of the room.
Helpful · Not helpful · Report
Report rating…

Send report
Quality
Philjshaw, 24.02.2015
Such a great desk! Love flexability of it and the continual updates to improve it.
Helpful · Not helpful · Report
Report rating…

Send report
Great features, small size
03.02.2016
The Mackie DL 1608 Lightning Console offers many great features packed within its small size. Sound is pretty good and the built quality is top notch. The handling feels a little strange in the beginning because of the iPad, although it is something that the user is used to pretty quickly.
An excellent feature is the recording ability of the master output straight into the iPad and its quality is awesome.
Highly recommended!!
Helpful · Not helpful · Report
Report rating…

Send report
Mackie DL1608
Marco414, 30.11.2017
Great mixer ,very nice layouts for Ipad Iphone .Fx work very good .Only issue I had was headphone stopped working .Never used that again but the mixer still worked great .Sound is good but summing could be better IMHO.RTA is a big help .I build a 19inch setup myself but they should provide that in the box.Multy channel out to computer DAW would be nice too ,maybe they fix that in the future ,the Mackie team is working hard on updates and are very creative.As a guitarist singer I would have liked the option to connect a footswitch or bluetooth device to change fx settings ,something like the IK multimudia bluetooth footcontroller to throw in a delay or different reverb when needed without using your hands.Anyway it still is a great machine.
Helpful · Not helpful · Report
Report rating…

Delivery free of charge expected between Wednesday, 6.10. and Thursday, 7.10. 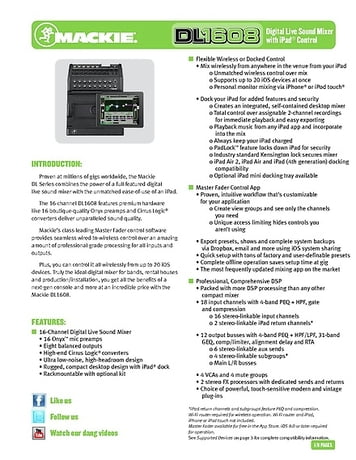 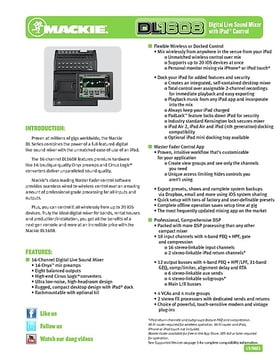