First gig, outdoors for a couple hundred people at a restaurant venue. This place does live music every weekend and is used to enthusiastic rock and pop bands. The band that hired me wanted a "large system" (dual 18s on each side, with dual 15s on top) but those systems were already booked so I told them little rig or someone else would have to do it. So I show up with a single ELX118P under a pair of ELX112p. I did the sound check before leaving for my other gig. The sound was full and ample, but the required level was not exceptional. It was very easy to mix on the rig. The first couple of songs I felt the bass could come up a little and adjusted the gain on the sub until I saw the limit light. The venue manager then asked me to turn down... repeatedly... until the bass guitar was no longer in the mix. Limit lights were no longer a concern at that point. I left the gig to another tech who by the end of the night said he "was a fan" of the EVs. 2nd & 3rd sets at this venue usually allowed for more volume. I hope he didn't drive them to limit, but it wasn't me so no way to know for sure. No thermal or shut down issues at all.

2nd gig, wedding for 250 people. The band is a 4 piece with tracks, they don't have a "quiet dinner set" and play up tempo motown and pop music. The sub was satisfactory for this event as well. Considering there was no live bass player, and all bass for the night came from that sub it was easy to appraise. No clip lights all night with the band except one song (Crazy in Love - Beyonce) and I was asked a couple times to turn the band down. I don't mix that loud, really... At the end of the night I put on some dance music while the band broke down (by using the handy RCA inputs, so I could pack up my mixer!) and on some of the dance music I was hitting limit occasionally. Still no thermal or shut down issues. The back plates were warm, but I think these guys just run hot.

My appraisal... for a powered speaker, at its price, it's a great value. I own an LS800p and the ELX does not come close to the SPL that Yorkville speaker can produce, but the ELX118p does sound better at medium volumes, less boomy. These relatively low volume gigs were a perfect match to the single sub Live X rig I used. I think for ROCK AND ROLL!tm gigs you'd need more subs to really keep up, so using them in appropriate numbers for the gig would be important. I would also not choose them for Hip Hop night club environment unless in great numbers or for very few people. But I would be willing to endorse the sub to anyone looking for a subwoofer aimed for the portable "medium volume" gigs.
Helpful · Not helpful · Report
Report rating…

Send report
features sound quality handling
The perfect sub?
Sam Felton, 01.04.2015
I spent ages reading reviews on the EV ELX range before taking the plunge. In the end I bought two of these 18" subs, together with two ELX 112P Tops. The sound quality is amazing. They're easy to set up, look great, sound great and can be carried by one person.

A lot of reviews have said they have an overheating issue, but I've used mine on multiple occasions - sometimes they've been on for 6 hours (2 hours band playing the rest background music) and I've never had an issue.

They're plenty powerful for pubs, weddings, parties and the overall quality is really impressive.

Send report
features sound quality handling
EV ELX 118P review
Richard J. 658, 23.07.2013
If you have the EV tops to match, great subs (only has a level control), very light sub for the punch it deliveries. I had one with a limiter fault and Thomann replaced it with problem, after that I acquired a second 118P to complete the set, with 115P tops
Helpful · Not helpful · Report
Report rating…

Choosing a PA System
Whether youre a fan, a promoter or a performer, the refined craft of live sound is vitally important.
Free Downloads 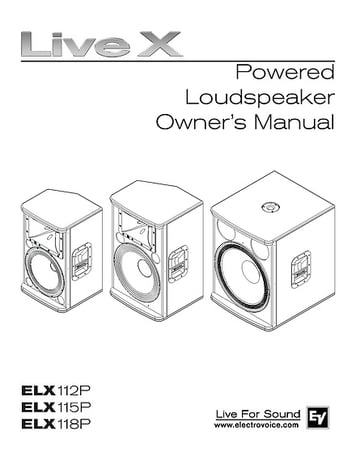 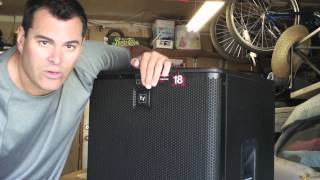 Show all
PA Speakers
In the digital age, the loudspeaker is the last and unchangeable outpost of analogue technology.
Show all
Choosing a PA System
Whether youre a fan, a promoter or a performer, the refined craft of live sound is vitally important.
Show all
Manual
PDF
test results:
Read review