Let's start with the cons just to get them out of the way:

The craftsmanship is really poor. The neck pocket is very approximately routed: if it weren't bolted on, the neck would have ample room to move around in all directions. I also have a dent on the binding, some black spots on the amber top between the selector switch and the volume knob, an unsanded scratch in the timber visible on the back of the body underneath the clear coat, a very obvious trace of some drill-bit running loose to scratch the first fret and tear away a chip of the plastic nut between the lower A and E strings' slots. The nut itself is offset by about half a millimeter towards the lower edge of the neck. It's unpleasant to touch, but luckily it does not ruin the outer strings' positioning on the fretboard - some day I'll just knock it off and reposition it correcly. On the fretboard, I also have poorly sanded wood grain around the 13th-17th frets, the rough surface of which makes bending very unpleasant at those places. It calls for a serious sanding job, as the massive wash of lemon oil I massaged into the entire fretboard didn't make it any better.

The stock strings are crap (they feel like raw industrial wire), so they went straight to the bin, to be replaced by a set of Dean Markley 9-46. The tuners are also of a lower grade, with quite some game on the shafts which makes accurate tuning a bit tricky. The pot knobs look and feel cheap, and the pots themselves are rather poor: the volume pot is too hard and the tone pot is too easy to turn. Plus they're not of the ideal type, i.e. they don't offer much nuance between their two extremes. Volume is either on or off, tone is either bright or sombre.

Last but not least the tune-o-matic bridge is also of lesser quality and unfortunately it is a drop-on type, not Epiphone's more advanced locktone version. The saddles are slotted to two gauges only instead of six: the higher E, B and G string have the same thinner slot, and the D, A and lower E strings also have one same thicker one, but that's it. Plus at least two of my saddle screws, those under the lower E and A strings, are literally crooked. Yes, crooked as in not straight, as if the tension of the strings had sufficed to bend them... That's really bad because with the retaining wire topping them, they are close to impossible to turn without removing the string and I'm afraid they'll just snap at one point (talk about PITA when doing intonation...). So probably the bridge will also have to go at some point in the future.

OMG so are there any pros to this guitar apart from the gorgeous looks?

Actually yes. First, provided you're okay with the limited versatility offered by the controls, the full volume full tone sound of the ceramic pickups is totally freaking awesome. You can get this baby to scream and howl like a real guitar. Don't expect Slash's tone, you won't get even traces of that for this kind of money (after all a set of his Seymour Duncan pick-ups costs more than this guitar altogether), but why would you want to mimic him if you can get your own very cool tones out of this gear?

Second, the shadow tuner mounted in the bridge pickup ring is amazing: very easy to handle, remarkably accurate, highly visible... A boon for beginners (and non-beginners too for that matter). It runs on a 2034 flat battery concealed in an easy-to-open slot in the control cavity's cover plate on the back side of the body. And the best part is that it uses the output sound, so you can rely on it not just for tuning, but also to check your intonation throughout the neck. The only downside I have found to this tuner idea is that since it uses the output signal, it only works when the volume is on. Which is okay in your room, but on stage, you'll need a mute pedal if you don't want the entire audience to hear you tuning up (they'll see your leds shine and blink anyway).

Third and most importantly: in spite of all the blemishes, the poor craftsmanship and the mediocre materials used in some parts, unbelievable as it is, the guitar is actually true and sound. The neck relief was correct from the start and the trussrod needed no adjustment even after I changed the strings. The fret job is remarkably even and pleasant, and the fretwire seems to be of quite good quality. Plus the fretboard's edges, while not bound, are sealed so that humidity won't infiltrate around the ends of the frets. So all in all, with a bit of work (but relying only on the built-in tuner and a screwdriver) I was able to set it all up to a perfect intonation and low action without any fretbuzz whatsoever. For the record, the factory setup was okay, but it could certainly be improved.

Fourth and last, the overall ergonomy of the guitar is surprisingly fine: the body is flat, thin and light (closer to an SG than to an LP), the neck profile is just in the middle (neither as chunky as on full grown traditional LPs, nor as thin as on shredders' guitars), and the single cut is just ample enough to give full access to the highest frets. In other words, it's a perfect design to get you going if you're a beginner, or to make for easy and relaxed playing if you choose this as your workhorse, travel or practice instrument.

As I have plenty of spare parts lying around (I own 17 guitars, and have kit-built 4 myself...) I will certainly do some upgrades in due course, to replace the bridge, the pots, the knobs, repair some blemishes, sand down the fretboard to a smoother grade, reposition or even replace the nut and change the tuning machines, but that's my guilty pleasure more than an absolute necessity. If all you have is 200 euros and a burning urge to get your first (or seventeenth) guitar, I wholeheartedly recommend this baby. It's far from perfect, but for this price, you couldn't get much better from any other brand, and probably none of the cool looks you get from this one.
Helpful · Not helpful · Report
Report rating…

Send report
features sound quality handling
Amazing beginner guitar
Tambet, 29.12.2020
Ordered it for Christmas and been in love with it ever since.
Pictures dont do it justice - its much nicer in your hands: the appetite amber AAA top and cherry bottom, with that nice cream inlay. She's a beauty!

All knobs and switch feel solid, finish is superb and you can really channel your inner Slash with it :)

Set-up was great out of the box, and guitar was pretty close to being in tune. Those Zebra humbuckers sounds amazing and it is comfortable to play, while having solid weight to it.

Now the rest of the package. Strap is ok and gets the job done. Picks with logos are very cool, high quality addition. Gig bag is ok - it's more of a dust cover really with almost non-existent padding and questionable weather resistance. I think I need to invest in a better one.

All-in-all it is absolutely worth the money. God I love this little Les Paul :)
Helpful · Not helpful · Report
Report rating…

Send report
features sound quality handling
Epiphone Slash AFD LP Outfit
Oleg B., 03.07.2020
Great guitar, cool, comfortable and beautiful neck, excellent pickups allow you to play in any style. Good splitting and bridge. The built-in tuner is a very convenient thing. The guitar looks much prettier and cooler than in the photographs. Mighty cover, cord, picks. Budget belt. I did not find the key for the anchor). In general, very happy with the purchase!
Helpful · Not helpful · Report
Report rating…

Send report
features sound quality handling
Great for the price. I love it.
br8bruno, 21.05.2019
It is a very pretty guitar that sounds pretty good. In this price segment a great choice. I would recommend it for sure.
The attention to detail is not great. The fretboard looks a little pale and old even when new. And the tuners are definitely something to improve. But as mentioned earlier, it is great for this price segment.
Helpful · Not helpful · Report
Report rating…

Choosing a Beginner's Instr.
The first hurdle though, is to decide on which instrument to learn?
Interesting Accessories 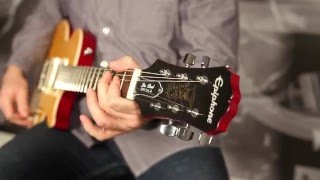 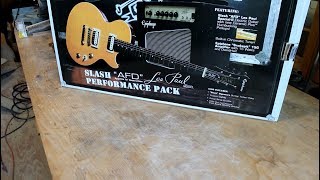 Show all
Choosing a Beginner's Instr.
The first hurdle though, is to decide on which instrument to learn?