Note: Eurorack modules are not included.

The kb37 is pretty much the only big name option at the time of reviewing and is a great option. The keybed is a Fatar, it's not weighted but it at least has aftertouch.

Having all the modulation options as CV outs is very useful, as is having full 1/4 inch jacks for sound output.

The only negatives for me are that the power outputs are unshrouded and bunched up to the left of the case. Also the power supply reduces the available space for the rightmost module.

I like this enough to have two of them and would consider buying more. I like to group my modules into a full synth rather than have a huge rack of modules.
Helpful · Not helpful · Report
Report rating…

Overall great live/jam instrument. Some caveats noted below.
AelitaFromMars, 04.08.2019
The good:
-The keyboard has a great feel and is as good as a semi-weighted can get. I'm used to worse so this feels a luxury to play on.
-While the case is a little on the heavy side, i feel confident this will stand the test of time and touring.
-Most features are well-laid out and planned.
-The line/headphone out sound is of high, noiseless quality.
-Potentiometers feel good.
-wheels have a nice stiffness.
-looks great.
-i'm enjoying playing it!
-the current price (595 eur) is great for what you're getting, i think.

The bad:
With the current firmware, the secondary pitch CV is not as versatile or intuitive as the first glance or the product phrasing (duophonic) would have you think. It is in fact a very *specific* mode of paraphonic where the pitch of the second key is always dropped/raised to the the same as the first key at release. This is good 1/10 of the time when the voices are identical in timbre and you want them to stack for a beefier sound when playing one note, but, frankly useless 9/10 at other times since modular voices are typically distinct from each other. You need a lot of extra circuitry/panel space and some clever thinking to come around this problem, because the 2nd voice has, which is still worse, no gate of its own.

This is a major oversight since two CV output jacks (y and z) has no local/self contained purpose (they only respond to external midi messages), which is sort of wasteful especially in combination with the above problem. Why not assign one to gate? The third could be an omni-key trig (not gate) or just about anything.

Hopefully this redundancy of unused cv jacks can be solved with a firmware update.

I feel this is important to point out in detail because the product info is a little vague and naive on this, but it shouldn't overshadow the overall excellent quality of the rest of the product!

The tactile response of the pushbuttons is not the best they could be. It doesn't matter too much, but could feel a bit better especially in a live situation.

The ugly:
-AC cable was missing though explicitly mentioned. Not a biggie, but still an oversight.

-Seems to be no way to tell (and edit) the 110/220v setting without disassembling the chassi or mainboard/PSU. The checkboxes to tell the factory setting were left unchecked, so there was no convenient reference.

Some modes (again the paraphonic, for example), leaves a big LED blinking for no good reason. In control panel design, i've known steadily blinking LEDs to mean:
-That something needs special/urgent attention
-That a temporary exception mode with either a timeout or auto-exit on any next action is in effect.
-Indication of timing/tempo

To use steadfast blinking to imply a mode that you have sitting for long sessions is bad design because it is distracting, a little stressing, and semantically misleading.

The factory setting for reference note is nonsensical as the lowest possible two octaves emit no pitch data/0v. So, the first thing you probably want to do when powering this on is tapping down to -2 octaves, press and hold setup, tap the "referense note" key, release setup, and then tap the lowest key. Now all octaves across all keys are actually useful for CV output and not just the 0 through +2 octave settings.

Furthermore, i feel self contained CV modes should be standard, and the midi cc modes the exception mode that needs to be activated. This is a really minor inconvenience and a personal preference, but i would expect any instrument to assume self-sufficiency first.

Very hypothetical feature creep wishing for a mk2 model:
-while i know how the glide knob does what most keyboards on the market do, i wish i had tactile control in when to apply glide and not, and not just the option of "automatic on legato" and "always on". Bourns make a series potentiometers that is also a push on/off toggle for exactly this reason (or well, i guess it is aimed at guitars, but why should keyboardists deserve less?)

-Thinking of the kb37 as a self-contained, portable gig instrument, i'd wish the output panel had a few different options. Often, mid(mono)/side inputs rather than left(mono)/right makes more sense in terms of HP space conservation and stereo processing. A four way switch could select output modes between all mono (unity sum mixer), L/R, M/S, and mute. If savings need to be done to compensate, i'd drop the line out attenuator. Typically you want the signal to be max strength at all times anyway, and you have the headphone attenuator if you really need it anyway.

Overall feel:
For a modular synth musician, it i'd say it deserves 4 out of 5 stars - not quite there, but otherwise a great keyboard. I's not quite as self contained and designed in a modular context as you'd hope, but still very good.

For a studio producer/musician or keyboardists who has a big MIDI rig or wants to toe dip into modular synthesis, it's probably 5 out of 5 stars, in other words excellent value for money.
Helpful · Not helpful · Report
Report rating… 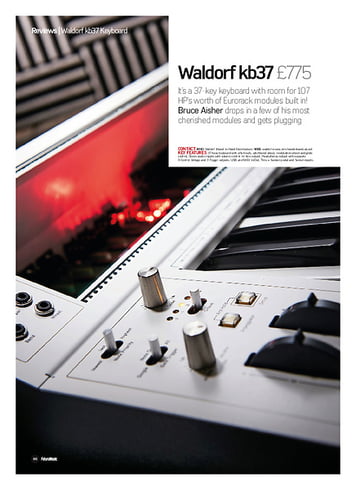 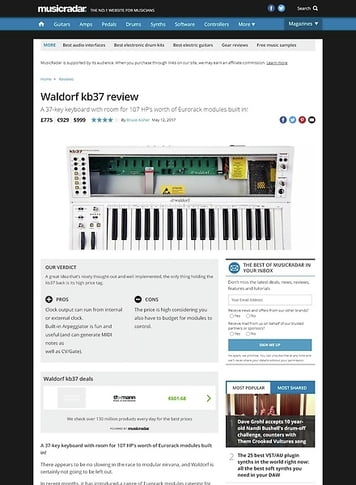 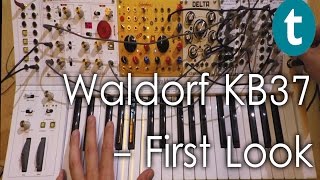 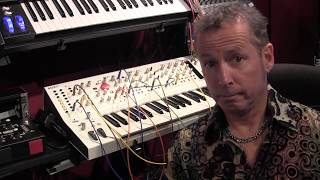