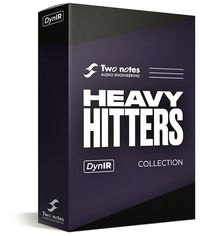 Get Rig Ready for Summer!

All customers who buy a Two Notes Captor X, Captor or CAB M+ in the period from 5 May through 7. July 2022, will receive an extended 5-year warranty from the manufacturer for their newly purchased device as well as get the Heavy Hitters DynIR Collection worth EUR 100,-. To do so, register on the manufacturer's website at the following link.

Here you can register your Two Notes device!
Show more

D
Great sound and features but a bit of a miss on the attenuator side DickPuound 06.07.2021
Great product, comparable to Universal Audio OX Amp but it comes at less than half the price.
The cab simulation is spot on, it actually sounds exactly to the real cabs I have with the added features of noise gate, reverb scenarios, enhancer and EQ, not much else you can ask. You can also load your own IR's without having the monopoly of two notes only.
Regarding the attenuation, I would have payed even more for an impedance selector (8-16 would have been enough for most) and also an attenuation knob.
The two fixed attenuation levels are a bit of a miss depending on the amps you will be using. If you have a 100w head they are spot on but for a 20-30w, it's a bit of a miss. The first attenuation level is kind of OK but not enough to really crank it at home without disturbing, while the third is just too low.
If it's for a 100w amp I would have no complains since 1st level is OK for band practice while 2nd level for home use is spot on, although as said previously, I would have payed something extra to have more attenuation options, either a knob or at least an intermediate level between the two.
Regarding the tone, I haven't detected any difference in tone while using the attenuator, so my only complain would be the two attenuation levels and the fixed impedance.
All in all, fantastic product for the cab sim and digital features (9/10), but a bit lacking on the attenuation side (7/10).
handling
features
sound
quality
4
0
Report

m
Awesome. Does all that I hoped. (Well the Reverb is a bit bwa) mdl 04.03.2021
I bought it to be able to record and also to play at night.
From the guitar and pedalboard I go thru my amps and into a focusrite scarlet 4i4 with 2 XLR to 2 trs cables.

I bought 2 irs from the celestionplus amp and I was so surprised on how good and similar the results where.

Reverb is what it is not great but ok.

I run into ableton Live and have a reverb there. SO its no issue.

I am am very happy with this device.

The only problem is that removing the speaker out cable is a hassle as I have a lot of cables comming out of the device. Power/usb/XLR/speaker in... etc. Not a lot of room
handling
features
sound
quality
0
0
Report

P
Better than i expected . Superb Piloti 30.12.2020
I use the Captor mainly at home , cause i live in an apartment i could use my amp properly , having to play always at low volume.
Since i purchased the captor that scenario has changed.
I couldn't be happier with my purchase , the cab sim is outstanding .
I would recommend the Captor X for home , studio and live situations.
Super easy to set up and super easy to use with the Two Note remote app.
Keep in mind that this is to be used with a Tube amp ( Head + Cab ) only.
It can be used with a combo but some modifications will need to be done in your combo , which was my case.
That said , i knew that in advance and as i said before im super happy with it
handling
features
sound
quality
0
0
Report