1) Build / Finish Quality: For the price, the overall finish was really good. The Gold brass bell stood out against the lacquered body really nicely. The joints are tight and solid with no excess solder being visible and generally looks and feels like a solid instrument.
The slides all move in and out freely, especially after a regreasing with Conn-Selmer slide grease. However, the 3rd valve slide is too loose for my liking compared to the other slides - not stupidly loose but not as snug as the others.
The valves definitely need some work as they were stuck when first played - possibly due to storage and temperature changes. They still feel a little sluggish but some proper valve oil (La Tromba T1) and a clean they are marginally better - they're not perfect but still very playable. I have a feeling the valves weren't necessarily matched to the casings they are in either. The valve top and bottom cap threads are left to be desired - VERY easy to cross thread if not careful. Not fond of the top hat style spring seats on the bottom caps and valves either - very easy to slip off when re-oiling the valves with a light metallic noise of the spring bouncing off centre if not seated correctly. Would have preferred a wider spring and a flat bottom on both valve and cap as less to worry about.
My score - 7/10

2) Protection / Accessories: The soft style case is really nice, supplied with shoulder straps and a decent size external music folder storage compartment. The separate mouthpiece holder was a nice feature too and can hold 2 mouthpieces easily. It came with a standard small bore mouthpiece but wasn't sized so no idea what I was initially playing with but looks and feels similar to my Bach 6.5AL which I used for most of the testing/playing.
Comes with 2 gloves for handling which was a nice touch.
I also found the Thomann supplied valve oil of no use as I couldn't open it properly to use it.
The instrument itself was protected in the case with a soft bag which was a nice touch also.
Again, taking the price into consideration, the case and accessories are what they are.
My score - 8/10

3) Playability / Intonation / Tuning
Really surprised with how well it plays despite the gremlins listed above. That said, I think playing a large bore "open wrap" trombone for 16 years along with Euphonium then going to a similar bore, but "closed" style instrument would help with getting a decent sound out. It sings beautifully at the top of the register but also has a deep lower register. There are a few mini issues with the top concert F, G and A as most instruments have in terms of tuning but not excessive and also the concert Ab in the stave (2nd valve) is always a weird note to get right too. I have resorted to playing most concert G notes on 3rd valve rather than 1st and 2nd too as it seems more secure and slightly better in tune. I've played hymn tunes, test pieces and technical solos and the instrument really responds well to all types of music.
My score - 8/10

4) General / Overall: For less than £600, I'm really impressed with this instrument. Having had it for 4 weeks now and used it in 2 brass band rehearsals as well as 10 hours home practice, it does need a little time to "bed in" properly but it is definitely a solid instrument and fits in really well with a brass band. The only minor issues I have are the valves, the lack of mouthpiece sizing and just a general build up of moisture fairly often when playing - the latter can be solved by being pro active and emptying the instrument at every opportunity. I'm also sure (hope) this will improve over time.

It won't be a pro level instrument by any means and there will always be a few little issues with a mass built instrument such as this, but for any aspiring player needing an instrument or a player needing a back up instrument then, honestly, this will be a perfect choice. I would probably suggest than a student that has established the basics and needs a new instrument ignore the lower price instruments and go straight into one of these - for the price you get a decent instrument that should see a few years of decent playing. 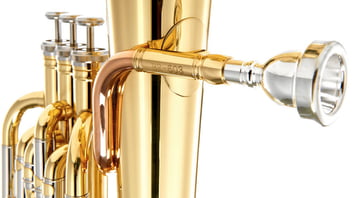