1073 Customer Ratings
4.4 /5
sound comfort quality
Best bang for your buck headphone!
hibber, 15.08.2018
I bought this headphone for my homestudio. I record music as a hobby so I wanted a decent headphone without spending the jackpot all at once. My previous headphone was also a Superlux (can't recall what series though) so this seemed to be the right one for the job.

The first thing I did was open a heavy mix in logic an take a listen. What I noticed is that the sound of the headphone is very crisp and clear. Very well balanced sound overall. I played with the bass, mids and highs in the mix and I feld very happy with my purchase right away!

The headphone is very comfortable to wear, the cushions make sure that you don't hear to much noise from 'outside', and after wearing them for a couple of hours they still remain comfortable.

So: the sound is very good, what about the construction quality?

It's mostly made of hardplastics and thats fine, it doesn't feel fragile but it also doesn't feel like it won't ever die on you. The main reason why I gave the quality only 3 stars is because the rubber around the jack cable is already torn on some places...

verdict: It's absolutely a no-brainer to buy this headphone. If you're like me and don't do music professionally you only care about a good sound and a comfortable headphone, and thats exactly what you get!
Helpful · Not helpful · Report
Report rating…

Send report
sound comfort quality
Fantastic sound but weak cable design
Christopher Lemos, 16.11.2018
I've had 3 pairs of these headphones, which is a testament to how good these sound and how badly their cable is designed.

For the price offered I don't believe you can get a better headphones experience, the sound quality is great, with a warm bass and ever so slightly recessed mids and highs. I've only sensed this sort of clarity and balance in headphones 80 euros and up, which at almost triple the price of these just goes to show how good of a deal these are. The sound stage is also very good, the open design allows for a really pleasant listening experience. They are also immensely comfortable, the adjustable headband works like a charm, the construction is pleasant and the velour pads are a fantastic addition to a 30 euro pair headphones
(They come with two pairs of pads, the faux leather ones that already come with the headphones aren't very good) I've mixed on these headphones for over 5 hours in a row with only mild discomfort.

So the reason why I don't rate these a perfect 5 is due to the cable design, the male jack on the headphones is just too flimsy and short and always ends up ripping with extensive use making the detachable cable useless. Either make it longer or sturdier, it's the only thing holding these headphones back.

Send report
sound comfort quality
Surprisingly detailed sound for less than 30?
08.04.2015
I had been using Sennheiser HD595 for several years until the headphone cable got caught between the armrest of my chair, which eventually caused it to fall down to its' death. So looking for a replacement headphone with a similar sound clarity but with a far smaller budget in mind... I wasn't very optimistic to say the least.

The Superlux HD-681 Evo arrived in a box where the product laid well packed. It includes a 3.5 to 6.3 mm headphone converter as well as two different cables (1 metre and 3 metre). The converter is not of best quality, it actually uses a clip-on in order to stay secured. I didn't like that. The cables are straight, quite thin and the connector seems to be adequate. They also included extra velour pads, which I as a matter of fact immediately replaced the pleather pads with (pleather pads are by default installed on the cans).

For a 28? pair of headphones I must say the build-quality is surprisingly robust. However, at the beginning I felt quite a force pressing around my temples and ears. To alleviate this, I let it stretch for several days (I used the triangle-shaped cardboard package which the headphone was wrapping itself around, plus some books for further stretching). After a few days of stretching the clamping sensation was gone and by now I had already burned them in some (I used various music and a burn-in soundfile found from JBL's website). If I recall correctly, someone recommended at least 100 hours of burn-in for this model.

The sound. Oh the sound... Clear. Wide. That was my first impression. For a headphone to sound this good for such a low price is nothing more than a bargain. The clarity and separation of instruments is something I was greatly pleased with, especially when listening to soft rock or similar music. While playing Toto - Africa from beginning. Kick drum, soft snare, cow bell on drum kit in the left ear, extra handheld cow bell in the right ear, congas in middle, succeeded by the famous synth-riff. Wonderful. However (be warned)! The highs were too high to my ears. I have some sensitivity to sibilance and I feel that these headphones amp those frequencies quite adamantly. The bass is very much present, but it is not presented in a controlled manner as it interferes and sometimes overpowers the mids in other songs.

After using these headphones sporadically (letting them burn in when not wearing them) I always felt the highs were unbearable. They were simply too pronounced and sharp for me to enjoy 90% of whatever music I was listening to. Well luckily there are two ways of fixing this.. Well, actually three, but two of them are very similar just differentiating in methods, so let's stick with 2. EQ (Equalization) and physical modification of the headphone.
After playing around with an EQ, I mostly adjusted the 5k and up, by simple lowering them more and more the higher up I advanced in frequencies. Now this may be placebo, but I felt the presentation and sonical experience turned muddy and veiled. So I tried a second alternative, add cotton pads (those round, white soft pads used for facial-cleansing and make-up removal). I simply added one pad inside each cup, fitted them right through the opening without needing to open the cups up, using my finger to slide the pad under the velour pad edges. To explain my initial reaction: it felt right. The sound was just the way I liked it, similiar sound profile that I was used to from my 595's. The sibilance was gone and I still found the headphones sounding enjoyable. Now, as I said, it may be placebo or it may not be, so it should be up to everyone to try an EQ or cotton pads. The bass is still quite the same. To be honest, I don't recall exactly how it sounded without the cotton installed, but hey, these cost 28?. Some sacrifice is inevitable.

Final thoughts.
These headphones are so cheap, that... that they don't sound cheap? That didn't make no sense, but neither does the price tag for these. These cans sound to my ears as a pair of 100? (or even more) phones. But because they are inexpensive, these have become my main "fun-phones", that is, I do not really need to worry too much how I'm handling these, whether it's at home or on the move somewhere else. It's carefree. It's fun. The sound is also quite exciting for watching films as the bass is very present when needed. Rock music goes quite well with these, as well as EDM. The only thing I really can't do with these, is enjoy classical music, but I already knew this prior to my purchase. The HD-681 Evo's bass is simply not very controlled, too much interference is going on around the low mids which takes away much of an orchestra's presentation. But remember, 28?, sacrifice is inevitable. I often use these when playing VST pianos in Cubase, it's a pleasure.

The bass is on about the same level as the HD681 but the treble seems more refined and less edgy.

The sound itself is wrapped on top of a big hearted bass. The bottom end is ramped up, very similar to the HD681 of old. However, the treble is less edgy so the headphone seems warmer and more bass focused. However, there is also a peak in the treble giving the top end a nice 'bite.'

The comfort is ok. I would suggest changing the pads for velour pads. A little more comfortable and less 'hot' for the ears.

I'm not keen on the shiny plastic finish on the sides. They are fingerprint magnets and I will be using a fine wet and dry cloth to rub this finish down to a matt look.

It comes with two cables that are easily attached to the headphone. One is nice and short for using with portable equipment and another to lengthen the lead.

For this kind of money, the HD681 evo is an absolute bargain if you like a bass led sound with good clarity and reasonable sensitivity for portables. It works exceedingly well with an amp and the bass is perhaps a tad more controlled.

Worth every penny.
Helpful · Not helpful · Report
Report rating… 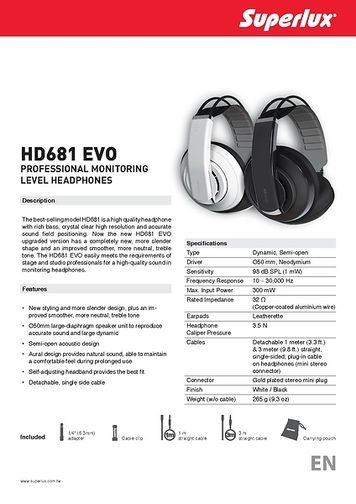 Show all
Headphones
Headphones are basics for any studio or DJ. But not all headphones are created equal.
Show all
Data Sheet
pdf
test results:
Read review