The construction is nice, as to be expected by Roland, and it doesn't bend down when put over an X-stand and keys are pressed with force (yes, some keyboards in this price range definitely do this...).

The only slight downside to it is the programming side of things. Onboard programmability is a bit limited, but that's OK, the problem is rather the supplied software. Everything in it feels a bit old-fashioned, as if it was a piece of software coming from the early 2000s. Not that it doesn't work, but the interface isn't the most intuitive and visually convenient. The handling of MIDI ports is rather unintuitive and sometimes needs to be reset, and the presets organisation could be a bit smoother in my opinion.

The above holds true for the manual as well. It's not "badly written", but many times I have had the feeling of it being unnecessarily overcomplicated. Some passages leave doubts as to what they are supposed to mean.

Overall I am rather satisfied with this keyboard.
Helpful · Not helpful · Report
Report rating…

Send report
handling features quality
Great action. Very well made.
markodarko, 11.01.2015
Before buying this I bought a Panorama P6 (see my review on here) as I thought it was exactly what I needed to integrate with my DAW (Logic), but more importantly I was looking for a controller keyboard with a great feel as I'd been using an old M-Audio Keystation 61es for years and it just didn't feel great to my fingers.

Anyway, long story short, the P6 had fantastic action - for part of the keyboard - and varying qualities through the other parts of the key bed. This on the other hand has that reliable Roland keybed which just feels great. It feels like a controller keyboard should feel to me - not like a piano, and not trying to be like a piano, just well made.

The fact that the locator buttons and sliders integrate seamlessly into Logic is another plus, although I did like the fact that the P6 had infinite encoders instead of physical potentiometers like the A-800 has - made tweaking parameters easier. However, that's not a big problem for me as I'm more old-skool in my approach to recording - preferring to record live instruments in the main rather than endlessly tweaking synth parameters etc.

So, if you're looking for a controller keyboard with a great synth-like keybed that's made really well then you can't really go wrong with the A-800. It's a pleasure, and inspirational to play.
Helpful · Not helpful · Report
Report rating…

Send report
handling features quality
Good keyboard
15.06.2014
Overall I was happy about this keyboard. Used it in gigs, though I figured out that MIDI-keyboard is not the best option for gigs, as it's not as reliable as a synthesizer: too many connections, software should be stable, etc.
That's why I sold it and I'm buying a synthesizer (Roland Juno-Di).

Pros for this keyboard:
- very lightweight
- heavy duty
- good keys (although of course I'd prefer weighted ones, but I understand it's totally impossible within this price and weight)

Cons:
- pads sensitivity is strange
- mod/pitch joystick: I'm used to separate wheels, which seem to be much more appropriate for these purposes
- maybe it's specific to me or it's common to all MIDI-keyboards, but I didn't find a good way to set up quickly-switchable programs on this keyboard, i.e. I used 8 software instruments and I had to use pads to switch between them quickly. Another option would be to use sequencer control buttons for that, but that's a little bit confusing.
Also, I always wanted each fader to have a on/off button, but this keyboard doesn't have this feature.
Helpful · Not helpful · Report
Report rating…

Send report
handling features quality
30.12.2014
One of the best keybeds in the wide (and sometimes dubious) market of usb keyboard controllers. If you are after professional synthesizer-kind of playability this thing can provide it.
Not class compliant in mac OS X but the required Roland usb driver is solid and you don't feel any added lagging or sluggishness when controlling VI's (assuming your sound card & system can operate at 64 (or 128) sample rate.) The editor program is fairly straightforward and easy to use and own controller presets can be stored to HW and recalled after power down without computer.
Unfortunately the plastic button and slider caps are poorly glued and in heavy use you'll start missing caps sooner than you would have expected.
The only volume/expression pedal that works properly is Roland's own EV5 (EV7)
Operates also on usb bus power but I would recommend using the external power adaptor for solid performance.
Helpful · Not helpful · Report
Report rating… 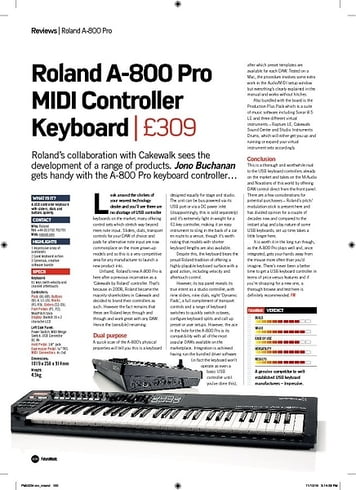 Controllers
These days, musicians are experiencing the increasing complexity of their instruments and devices at first hand - regain some of the control you've lost!
Interesting Accessories 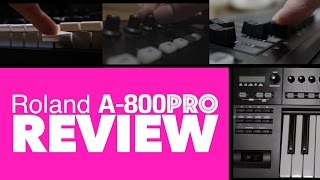 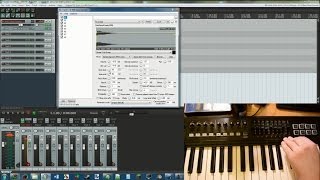 Show all
Roland A-800 Pro MIDI Controller Keyboard
Future Music (0/0)
Read review · Read conclusion
Show all
Controller Keyboards
At the simplest level, a controller keyboard, also commonly known as a "master" keyboard.
Show all
Controllers
These days, musicians are experiencing the increasing complexity of their instruments and devices at first hand - regain some of the control you've lost!
test results:
Read review