360° view
Please activate your javascript. You’re currently missing out on our lovely designed product gallery and its useful features (zoom into the very last pixel of each picture, 360 view, videos and more). We wouldn’t miss them for the world.

Orange presents the Micro Dark, an extremely compact hybrid amplifier with a tube-driven preamp stage and a 20-watt transistor power stage that delivers an outstandingly flexible sound: From clean and crunch through to high-gain Metal tones. And the Micro Dark also has plenty of volume on tap. Its clear three-control layout with Gain, Volume, and Shape lets you quickly dial in the tone you are looking for, and a series effects loop is also included to accommodate your favourite effects. To top it all off, the Micro Dark features a combined headphone/line out jack with cabinet simulation circuitry, so you can enjoy the full quality of the sound when practising silently and record directly in the studio without needing to connect speakers. 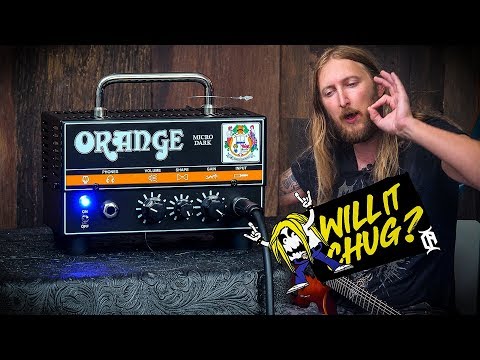 From Funk to scooped Metal

Despite weighing just one kilogramme, the Micro Dark packs enormous flexibility and tone-shaping capabilities into its diminutive sheet metal housing: From warm and shimmering clean sounds for Funk, down-and-dirty breakup for Blues, and gritty crunch for all genres of Rock through to mid-scooped Metal tones with plenty of gain. The Shape control, which is the centrepiece of the amp’s front panel and replaces a conventional EQ section, profoundly affects the amp’s tone in every position, delivering new and interesting sounds with every adjustment made. The Micro Dark may have just 20 watts of output power, but it can do a lot more than meets the eye: Pair it up with a full-sized speaker cabinet and it can definitely hold its own both in the rehearsal room and on smaller stages.

Dynamic tube tone for all

Thanks to its budget-friendly price, the Orange Micro Dark is of course ideal for beginners looking for a tonally versatile and easy-to-operate amplifier that delivers authentic tube tone, but the astonishingly rich variety of sounds available means that this head will also find favour with more experienced players. The Micro Dark’s effects loop and combined headphone/recording output are important tools which allow it to be used at home, in the rehearsal room, in the studio, and even on stage. Its compact dimensions and light weight are also advantages that are not to be underestimated, particularly when it comes to moving your gear from A to B.

The British company Orange was founded in 1968 by electronics engineer, bassist, and guitarist Cliff Cooper, who among other things was a member of the band "The Millionaires". Even in its early days, when the company was already producing guitar and bass amplifiers and speaker cabinets, it recognized the value of an eye-catching and easily recognisable design. The orange colour, the striking logo, the picture frame image of the solid-looking amplifier and speaker cabinets, and the basket weave speaker grille cloth are still its trademarks today. In 1979, the unexpected and sudden bankruptcy of its distribution partners obliged Orange to close. Then, in 1993, the U.S. Gibson Group revived the cult brand in England under license and in 1997, the brand finally went back into the hands of Cliff Cooper. Since then, the product range has been actively developing once again.

Flexible in every situation

It makes no difference whether you are using the Micro Dark with a small speaker cabinet for practising at home or running it through a 4x12” cabinet on stage: It will always deliver an outstanding sound. Despite having only one channel, this amp produces an authentic-sounding tube tone that is versatile enough to satisfy both Blues and Metal guitarists, and the series effects loop means the sound can also be further enhanced by adding delay, reverb, and other modulation effects. What is more, the combined headphone/line out with cabinet simulation allows you to record directly without needing to connect the amp to a speaker cabinet.

E
Amazing despite its size EliasH 23.07.2020
Bought this originally for home use with a 1x12 Celestion Greenback, but this is definitely made for more.

Loudness:
If you're wondering if this has enough volume for your bedroom, the answer is clear. YES! Especially if you like to crank the gain. For some it would maybe be too loud with a 12" speaker as you need to reach a certain volume to get a good tone. The volume knob is really sensitive at the first quarter so it's either no volume, or a lot of volume. This is also powerful enough gor gigs, and you can connect it to a 4x12 with no problem.

Tone:
The tones on this thing is amazing, even compared to the more expensive amps. Even though it's a hybrid it sounds like an all-valve. Honestly, most people wouldn't even hear the difference.
It's versitile too. Grab a stratocaster and dial it in for the good old rock tones, or switch to a humbucker and crank the gain for some killer doom metal tones.

It works great with gain/booster pedals, but for myself I see no use in it, as the gain already is badass. I put a reverb/delay, and maybe a looper pedal in the effects loop, and I'm good to go.

Size:
I just have to point out, this thing is ridiculous small. It's smaller than a six pack of 0.5L cans. Traveling with this is the last of your worries.


Cons with this amp:

Only 1 channel:
This can be a problem if you like to switch between clean and dirty mid-song. To do this you must either use your guitars volume knob, or use gain pedals instead of amp gain.

No aux in:
Can make it harder to practice with backing tracks, but if this bothers you I must inform you that yes, you can work around this by using the buffered effects loop. although you might need some extra gear for it. Do a quick google search ;)

Shape instead of tone knob:
Not a huge problem, but this knob acts a bit different than the normal tone knobs. I like it, and I usually just leave it around the 1-2 o'clock position as I find that to be the sweet spot. If this really annoys you, you might want to add an equalizer.

The headphone output sucks:
Even though it got a 4x12 cab sim, I can't say it sounds any good. On the other side, I've never seen an amp with a good headphone out, so compared to them.. Maybe it's not that bad. Just don't have high hopes.

In the end i would say it's a fantastic amp where you really get what you pay for. There aren't many extra functions on this, but that's probably why it's so cheap. I would highly recomend it if you're looking for the good Orange tones at a low price.
handling
features
sound
quality
6
0
Report

D
A micro monster Duley 21.08.2019
I bought it to bring it with myself when I go to college, as it would be pretty difficult to bring its bigger brother, a full sized head and its cab I have.
I've played this little thing through a 2x12 and a 4x12 cab as well. Got to admit, it sounds pretty damn awesome. And it's surprisingly loud. You can easily rehearse, gig, keep up with a drummer, a whole band with one of these little bad boys, as long as you pair it with a bigger cab.
The clean and crunchy tones you can get out of this little head are gorgeous. And it's true that it has loads of gain too, but as you turn the gain up, let's say above 2 or 3 o'clock, it becomes a little bit too fuzzy, for me at least. I've played with the shape knob, and tried various type of guitars with different pickups (Les Paul, Strat, SG and so on), but the fuzziness is still there. I mean it's nothing crazy, it's totally fine if you're up to play some classics that require that kind of tone, but if you want to play heavier stuff, you'd have to consider adding an overdrive/boost pedal, just to tighten it up a little bit. So I've put a TS mini in front of it, and it works like dream for me.
Had it for almost a month now, and since I have it, I barely even touched my other amp. This little, affordable rock'n'roll machine deserves a big thumbs up. Although you can't just really limit its potential to rock'n'roll, as if it's set and used properly, it can play pretty much anything.
handling
features
sound
quality
2
0
Report

e
wow emi19 24.09.2019
I always wanted a tube amp, but they are a bit too expensive for me and most importantly, they are simply too loud for a bedroom.
so after reading and watching videos regarding this head, I thought I was making the right decision by going with this head, due to its solide state power section.
(keep in mind I only play in my bedroom)
the cleans: you'd expect them to be just okay, well actually, they are very good. I was pleasantly surprised with them.
the crunch is very good as well, nothing to complain about.
when you start to push the gain and get into metal territory, things can get a little too loud, to the point where i have to keep the volume of both guitar and amp to 2.
However, the distorted sound is amazing, even at low volumes.
do I regret buying this? absolutely not, the sounds it offers are wonderful.
the only con I can find is the lack of a 3 band eq, replaced by the shape knob.
if you want to upgrade from SS but not really fond of tube amps, this is the perfect compromise
handling
features
sound
quality
3
0
Report

d
What can anyone say... drSotos 30.05.2021
Amazing, just amazing.
It's just amazing how much that tiny amp can produce.
It came with a Psvane ecc83 tube from factory, and sounds just killer.
I paired it with an OD to boost the signal and a graphic EQ in the FX loop for more versatility and the results are just perfect.
Totally deserves the credit.
handling
features
sound
quality
2
0
Report