Now that we have found out about the main differences between active and passive pickups, the time has come to go into more of the basics. Let’s have a look at the different pickup construction types and their characteristics.

The pickup concepts described below are available as both passive and active pickups. The components used and the way they work are identical for both categories.

A pickup consists of a copper wire coil wrapped around one or several magnets. Many systems also make use of polepiece screws which are connected to the magnet below the coils in order to achieve the magnetization without which the system wouldn’t work. The polepiece screws have the task of accurately picking up the vibration of each bass string. The vibration of the (metal) string above the magnets or polepiece screws alters the local magnetic field and in doing so motivates the copper wire coil to create a current. This is the process known as induction in physics. As the strength of the produced current directly depends on the intensity or frequency at which the played string vibrates inside the magnetic field, you might say (although this is lay speak) that the current induced in the coils translates the sound of the strings one-to-one into an electric signal. It carries all sound-specific information and can be translated by a suitable amplifier back into an acoustic signal.
Just as with guitars, there are two basic construction types for bass pickups, which are defined by the number of coils used: single-coil and double-coil pickups, or humbuckers.

A single-coil pickup consists, as the name clearly implies, of a single coil surrounding the magnetic or magnetized polepiece screws. Single coils produce a brilliant, very clear and open sound. However, their single-coil construction makes them sensitive to ambient sound resulting from electromagnetic emissions from radios, transformers, neon tubes or computer monitors.

By the way: If you have a bass with two single coils (like, for example, the Fender Jazz Bass) and if you then set both pickups to the same volume level, you kann minimize the pickups’ ambient noise sensitivity. Which brings us to the second pickup construction type. The…. 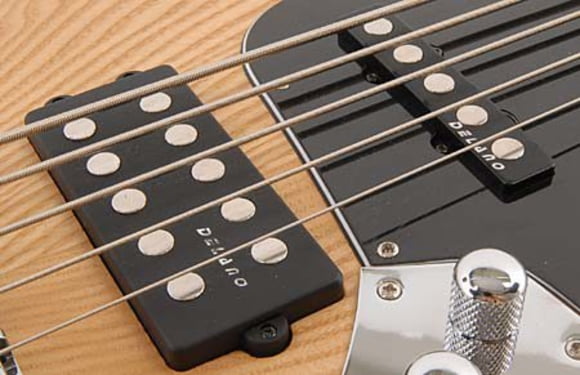 Compared to single coils, bass humbuckers perform with less ambient noise and, as a rule, more powerfully, too. This is because the two coils are combined in such a way that any interference that may occur through external electromagnetic influences is cancelled. At the same time, the output of both coils is added together, which automatically leads to more power, but which also changes the sound’s character. The mids become more pronounced and while it loses some of the brilliance compared to single coils, it gains drive and power.

The third type was first used in the Fender Precision Bass and is therefore also known as the P-style pickup. Just like humbuckers, p-style pickups are basically double-coil models. But the coils don’t pick up all strings simultaneously. With the P-style, one coil works with the E and A strings, the other with the G and D strings. 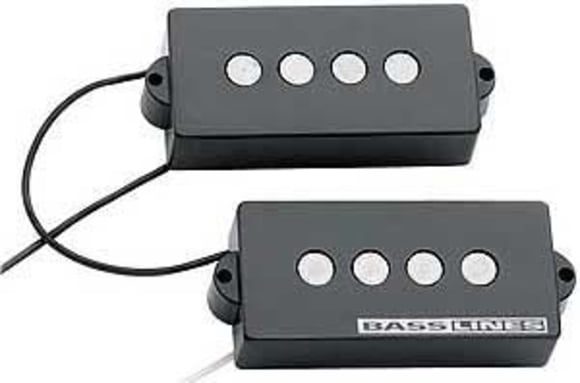 The piezo crystals embedded in these pickups generate energy when subjected to mechanical stress (string vibration) and are usually placed in the bridge, below the string saddles.
Due to the specific way piezo pickups work, their sound differs greatly from that of magnetic pickups. This is why for basses piezo pickups serve more as a way to broaden the sound possibilities rather than as a fully-fledged and therefore exclusive source of the sound.

The reason for the difference in sound is that the magnetic coils of a normal pickup are first and foremost influenced by the steel strings’ vibrations in the respective magnetic fields. Piezo pickups, on the other hand, react to the vibrations of both the strings and the body of the guitar and can therefore produce a sound with a more “acoustic” character. How good the sound turns out to be in the end depends on the quality of the mechanism used. After all, just like active magnetic pickups, piezo pickups require their own electric pre-amp. And this has a massive influence on the overall sound of the system. Low-quality piezo systems sound harsh and shrill, high-end systems deliver a very natural, almost acoustic sound.

By the way: Mixing sound generated by magnetic and piezo-electric systems has proven very successful in this regard! 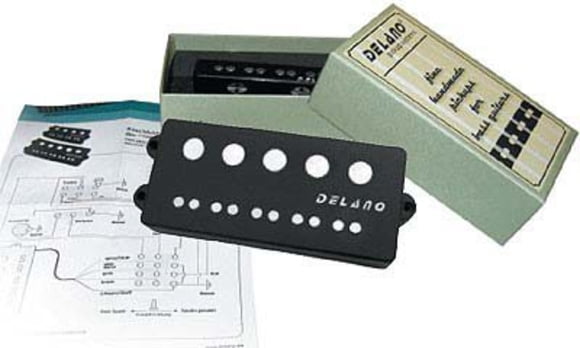 Single coils sound fantastic and are at least as important as their double-coil counterparts. This is regardless of their greater sensitivity to ambient noise. Still, the biggest names in the business spent many years working on ways with which to reduce the humming that sometimes happens with single coils effectively.

But there is a problem: single coil fans are not looking for the double-coil sound. So pickups had to be developed which are resistant to ambient noise while still delivering the typical single-coil sound. One thing was clear from the start: there was no way of doing this without including a second, buzz-reducing or hum-bucking coil.

The greatest producers of bass pickups (DiMarzio, Fender Noiseless, EMG, Seymour Duncan etc.) all used the same trick: in order to fit both coils into a single coil case, they are stacked one on top of the other (for example, Seymour Duncan STK-J2, or DiMarzio Model J). In order to minimize intereference between the coils, they are shielded from each other using a thick metal plate. But the pickups’ most important feature is that the coils differ greatly in how many times the wires are wrapped. The result is an almost authentic single-coil sound, without humming.

Corresponding to the two coils and the four attached wires, the wiring of virtual single coils is different from that of true single coils. It rather resembles that of humbuckers, which also allows for coil split (single-coil) or phase reverse settings, which increases the sound possibilities even further.