The best of different controllers

Numark's Mixtrack Platinum FX was launched together with its sister model, the Mixtrack Pro FX. The intention behind this was to provide two perfect entry-level controllers for different needs. The Mixtrack Platinum FX was given a wider range of functions with four-deck control and two on-board displays, while the Mixtrack Pro FX has everything for scratch performances with two-deck control and scratch makers on the jog wheels. In both models, Numark has integrated components from larger and more expensive controllers and mixers with each other, thereby fulfilling its mission to create unique entry-level controllers. The high-quality jog wheels and FX paddle triggers, which actually come from Numark's Scratch mixers, stand out in particular. Both variants of the Numark controller are optimised for Serato DJ and include a Serato DJ Lite license. 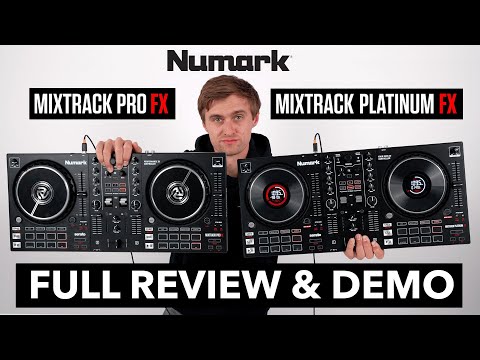 In addition to a USB port, which serves as both a connection to a PC or laptop and as a power supply, there is an RCA stereo master output and a microphone jack input on the back for connecting a microphone or other sound sources. The microphone input and the master output can be easily controlled via the two knobs on the upper corners of the controller. For previewing the next track, there are two headphone connections on the front of the controller, consisting of one 3.5 mm and one 6.35 mm jack. The integrated sound card in the device works at 24 bits at a sampling rate of 44.1 kHz.

The Mixtrack Pro FX is already the fourth version of the Mixtrack controller from Numark. With its very robust and high-quality workmanship and the even better jog wheels, Numark has brought the best variant of the Mixtrack to date onto the market. As a classic two-channel controller, the Mixtrack Pro FX is aimed primarily at newcomers to DJing. In combination with the effect triggers, the creative use of effects can be learned playfully, while the two displays on the jog wheels ensure that the overview is never lost. Thanks to the integrated four-deck control, ever more elaborate DJ sets can be performed and practised. This provides especially beginners to DJing with a steady overview of the tracks that are playing.

Numark, based in the US city of Cumberland, Maryland, was founded in 1971 by Harry and Robert Kotovsky. Numark's professional DJ equipment became popular from the outset and the company instantly gained the reputation of being a leading manufacturer in the DJ industry. Numark quickly proved what the company's focus would be: Innovation and technology. Many of its now older products, such as the DM1775 mixer or the CD5020 dual CD player are still prominent in the industry today. Their conception already reflected Numark's ability to be a pioneer in terms of functionality and design in the DJ sector. Following in these footsteps, the DMC-1 was the first DJ software controller to hit the market, and was soon to be followed by many more.

As a familiar feature from the Scratch Battle mixer, the FX paddle triggers allow for quick, intuitive FX control that is difficult to achieve with a conventional FX knob. A simple tilt of the FX paddle is enough to trigger the desired effect. When the FX paddle is tilted up, it locks into place, activating the effect until it is moved back to the other position. On the other hand, if the paddle is tilted down, the effect is only activated as long as it is held. When released, the paddle automatically returns to its original position and deactivates the effect. In this way, effects can be controlled quickly and easily with just one finger.

L
The best for beginners! LordGarlick 21.03.2022
This is the best controller for beginners and bedroom Dj's and had all you need, including a full size tempo slider and some very decent hardware overall.
handling
features
sound
quality
0
0
Report

R
excelent Robert1302199 02.02.2021
I just say I'm very impressed with the build quality of this entry level controller. Everything works right as it should. The display in the deck come in really handy .
The only "problem" I can find it that you're limited to the effects pre installed in the controller.
I would definetly recommend it to anyone wanting to start out as a dj!
handling
features
sound
quality
0
0
Report