A fresh new take on the theremin

The theremin has a long and illustrious history in popular music, and Moog has now reimagined this classic instrument in a compact new version: The Theremini. Company founder Bob Moog owed his initial success and the reputation that came with it to these instruments, which guaranteed musical success regardless of age or physical ability. Both the original incarnation of the instrument developed in the 1920s and its later interpretations are controlled via two antennae, though the sound synthesis is now carried out by Moog's Anisotropic sound engine which, the manufacturer states, captures the sonic vocabulary of Moog's synthesizers and allows it to be intuitively controlled via tablet computer, thus combining the touch-free experience of an authentic theremin with cutting-edge sound technology. Users who have an iPad can also shape and customise the sound using the in-depth parameterisation options provided by the free Theremini app. 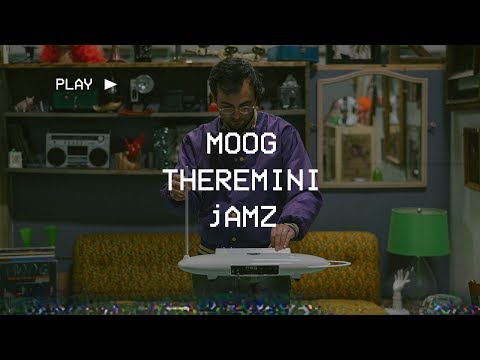 Antennae for volume and pitch

The Moog Theremini has a horizontal loop antenna used to control the volume and a vertical rod antenna used to control the pitch, and the control interface comprises four rotary controls for volume, pitch correction, effect level, and presets, the latter of which are also displayed together with the selected scale and the selected effect via the LC screen. To help the player improve their pitch accuracy while playing, the note being played is displayed on the left side of the screen, while the horizontal bar and diamond on the right show the accuracy of the note. The "Scale" and "Root" buttons to the left of the display allow the player to select the key in which they wish to play: Pressing the respective button scrolls through the individual settings, while holding it and rotating the Preset knob allows the selection to be made more quickly. The Theremini also features a built-in stereo delay effect with a selection of three settings (short, medium, and long) which can be set using the Effect button, and the player can adjust the effect level using the Amount knob.

A theremin for all occasions

The Theremini is for everybody who wants to liven things up by integrating an experimental instrument into their performance. It can be played in any situation thanks to its integrated speaker and even silently thanks to the headphone output located on the control panel. What is more, a 3/8" threaded mount is included on the bottom of the Theremini to allow it to be mounted on a stand (available separately) and played standing up - perfect for live performances. The rear panel of the Theremini features a stereo output for which the output level can be determined via the Master Volume section of the settings menu, as well as a control voltage (CV) output for controlling external hardware devices. The function and voltage range of the CV output can be switched between 0V and 5V or 0V and 10V in the MIDI/CV Setup menu. And to ensure that the Theremini will still be there when you get back, the rear panel also features a Kensington MiniSaver cable lock slot for enhanced security.

The US manufacturer of synthesizers, based in Asheville, North Carolina, is one of the pioneers in this field and has legendary status. Robert Moog had been involved with electronic sound generation since the 1950s and his first experience was with the manufacture of theremins. The breakthrough came in 1968 with the Grammy-winning album "Switched-On Bach" by musician Wendy Carlos (then know as Walter Carlos), recorded in multitrack with a mono synthesizer. The Minimoog, released in 1971, became the most popular synthesizer of the 1970s and is still considered the benchmark for the quality of synthesised sounds. It and the following devices, like the Memorymoog, Polymoog, and Prodigy, shaped the sound of numerous albums, from Stevie Wonder to The Police and from Saga to Kraftwerk.

The Theremini needs to be calibrated in order to adapt to its environment and to the player's body movements and playing style, and the calibration process should be repeated whenever it is set up in a new location or has been unused for an extended period of time. The dedicated menu guides the user step-by-step throught the hand movements required to make the necessary settings. When the Auto Mute function is deactivated, the Theremini will continue to drone at the lowest selected note when the hand that controls the pitch antenna is out of range; when this function is activated, it will instead stop playing or mute itself. As well as a detailed and illustrated guide to the calibration procedure, the included instruction manual also provides useful tips regarding playing technique and handling. The Presets knob is incremented and as mentioned above can be used to scroll through 32 different presets and find the desired sound quickly and easily as well as to set various parameters in the menus via the LC display. The USB-B port can also be used to send and receive MIDI data, allowing external hardware to be controlled or MIDI data to be recorded to a DAW.

A
Great product IF you have the latest firmware Anonymous 31.03.2015
Well, I'm sure I don't need to explain what a theremin is being as you're looking at this page but this one is a little different. It's digital and the sound is "modeled" which may sound a bit 'meh' to some BUT it enables the use of many different sounds rather than just the traditional theremin "spooky space" noise. It features a moog synthesis engine and can produce many different types of tone which, to me, pretty much stands it above the rest of the theremins on the market.

It also features what I can only describe as an "autotune" function that enables the user to dial in a "scale" (many, many are covered) and play from there. The function corrects notes to the nearest in the scale so basically anyone can enjoy playing the instrument instead of having to take a great deal of time to "learn" hand positions etc. You can vary how extreme this effect is from very subtle to obviously stepped tones and everything in between (it's controlled via a dial so the transition between soft/none and harsh/strong is very smooth and there's plenty of space inbetween)

The "look" of the instrument is very "lost in space", a kind of flattened pill sort of look. It's cast in plastic and feels light/not particularly sturdy but being as you're not really meant to touch it much this isn't a problem. The functionality is there and that's the most important thing. It also has a small speaker on top which you can use without plugging anything else in, which is handy, although it is quite quiet. I would definitely suggest plugging it into something but if you want to play around in a "portable" manner then this facilitates taking it from room to room. Also, perhaps worthy of note, because the speaker isn't too loud it removes the "annoyance" aspect of trying to practice this interesting instrument with others in nearby rooms or within earshot, so it could be handy for parents to buy for their kids to keep them entertained. It's a nice afterthought, anyway, and reminded me a little of the Korg Volca inbuilt speakers. Not great but certainly good for immediate out the box playability.

The setup is reasonably simple and you can re-calibrate whenever you like. This is handy as it lets you vary the distance you need to be from the unit to get the lowest note. I've found having a reasonably large range is preferable, especially if playing without the "scale correction" (autotune) as you have more space for each tonal area.

The ONLY quibble I have with this unit is that the "out the box" firmware seems somewhat twitchy. I'm not sure if Moog have upgraded it on later units but I had to flash the firmware using a tool and an updated firmware from their site then communicate with them directly to get a prototype firmware (which has probably been made public by now, to be fair) which fixed my display. The display was glitching/jittering up and down sometimes but this has since been fixed. Hopefully they are shipping all units with this firmware now but be advised that it's definitely worth using the upgrade/firmware tool to check yours and update if required.

Ultimately this is a very reasonably priced unit with MORE features than units twice the price. Aesthetics may not please everyone but theremins aren't the most pretty things at the best of times and what this one does with different presets, scale correction and inbuilt effect (there's a delay onboard, too) more than make up for that.

H
Eat your heart out Jimmy Page HappyTree 27.07.2016
This little theramin is so cute and has so many great features, whether it be a variety of sounds, or effects and quantizing.

This last one is the big feature. In smooth frequency (original) mode it's hard to land on the right note in tune if you want to use this for anything more than just wailing Whole Lotta Love sounds. So you can turn on quantizing which "snaps" to the next note in a pre-define scale. I don't understand the names of these scales (Mixy-dixylothian?? No idea; ask Steve Vai) but I do appreciate being able, out of the box, to play tuneful things with this.

Not only does it snap to notes, you can even fine-tune the degree to which it snaps, giving you a little, *literal* wiggle room for wiggling your hand and giving the notes some vibrato.

This is a serious instrument and a cool party play-piece at the same time. Anyone can sound good on it, or you can "go pro" and play it like a boss. Brilliant fun.
handling
features
sound
quality
7
0
Report

p
Amazing device! playerfh 22.01.2020
Bought as a gift for a friend who has wide interest in music. Tested it for a few days - it's absolutely lovely thing. Solid build, nice materials, very adequate size for such device, it will fit as eye-catcher on a shelve, but also it could bring you a lot of fun as an amusement muscial device. I will definitely get an extra one for myself!
handling
features
sound
quality
2
0
Report