To summarise: this is a fantastic kit all round in terms of sound, tuning flexibility and achieving what it sets out to do with the extreme portability and quietening bags, and all for £303! It is hard to conceive of ever being offered a better kit at this price point!! HIGHLY RECOMMENDED!!
Helpful · Not helpful · Report
Report rating…

Send report
sound features quality
Small drum with big sound
Sara Drumair, 02.12.2020
I bought this drum for fun, but it ended up to be legit drumset which you can use for gigs with no excuses. I love it. Lugs are lower quality, I am afraid I might have the problem with those in the future.
Included bags are not what you expect, these are not drum bags at all, don't count on them. These bags are made of super thin textile, and can be used as inner bag if you want to fit two drums together in one proper drum bag (f.e. bass drum and snare).
Helpful · Not helpful · Report
Report rating…

Send report
sound features quality
perfect for working drummers
Stefan Goranov, 05.02.2019
My story with the Breakbeats goes back to NYC 4 years ago - I was there for half an year and needed a drum set so I got one of these because the price was very attractive and they were easy to carry around - I carried them once for 40 minutes myself - not the best experience but is possible... When I left the city, I sold them and went to Madrid for an year where I used a friend's drum set - which happened again to be the breakbeats.
Back to Bulgaria I bought them again from Thomann. Once I did it - one of the other jazz drummers in Sofia got ones like mine because the sound is really impressive.
I really enjoy the heads that come on the drums - especially the bass drum but also the toms. Very good quality - perfect for what they are made for - breakbeats. If you want to play jazz however, maybe is a good idea to change them - I still keep the original heads though for pop/funk gigs.
I even had a punk rock gig on which I used the 16 inch bass drum with the original head - I was also lucky that the sound engineer was great and he made it sound massive on an open air gig and people were surprised to see it was actually coming out of this small bass drum.
The only thing that might need changing when you take them out of the box is the snare head since it is slightly too loud than I would expect - makes it a bit unbalanced with the toms, but well...this goes pretty much for every snare you buy - usually they don't come with great heads from the factory.
Helpful · Not helpful · Report
Report rating…

Send report
sound features quality
It was love for the first sight!
Blondie73, 18.04.2020
Perfect on the go.
Portable, small, easy to tune and beautiful sparkly :)
Had to change snare rims to die cast because it was too thin, but otherwise pretty awesome.
The 16" kick works pretty well with an EMAD no matter if you use it as a kick or a floor tom.
Good choice for educational purposes.
Helpful · Not helpful · Report
Report rating… 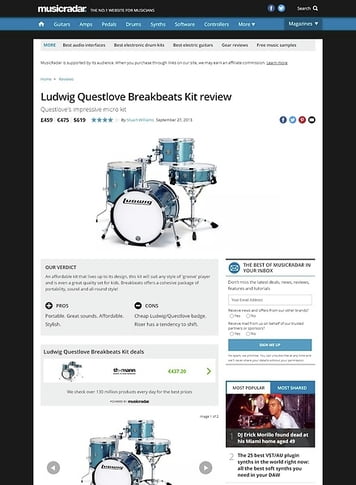 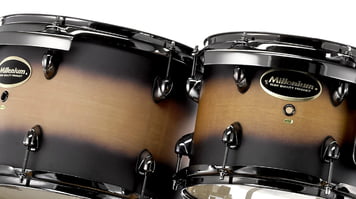 Drum Shells
In our online guide, we want to look at the modern drum set from every angle.
Interesting Accessories

Show all
Ludwig Break­beats Set | Port­able but how does it sound? | Gear Check
Thomann's Drum Bash 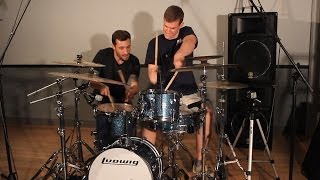