AmplifierSince the introduction of modeling technology into the guitar amplifier world, guitarists have been able to access a variety of sounds and effects with relatively little effort.

The new generation of guitar amplifiers!

For a long time now, many guitar amp manufacturers have been on a quest to pack the sound of the world’s most legendary amplifiers into a single unit – none of them with any real success until, in 2012, Kemper opened a new chapter in amp history with its Profiling Amplifier. Using the entirely new and unique “profiling” technology, the sound of any desired amplifier can be recorded with a microphone and then further edited and shaped in the Profiling Amplifier PowerHead. The Kemper’s high-performance electronics and high-quality DSP effects, extensive routing options, wide selection of cab and microphone models, and intuitive user interface – styled after that of a real guitar amplifier – let you revive these legendary sounds, enhance them with contemporary features, and store them permanently: An ingenious concept that has ushered in a new era in guitar amplification. 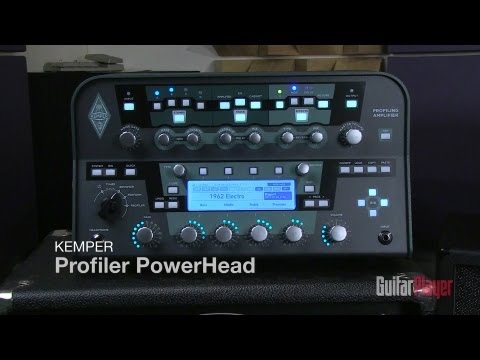 The best guitar amps of all time, emulated to perfection

The search for that perfect amplifier ends with the Kemper Profiling Amplifier PowerHead thanks to its profiling technology, which gives guitarists countless amp models at their fingertips and also lets them directly record and preserve the sonic characteristics of any amplifier they want: In other words, the boundaries of flexibility have now been completely re-drawn. Innumerable other digital editing options make the Kemper Profiling Amplifier PowerHead without a doubt one of the most flexible guitar amplifiers on the market. When paired with the right speaker cab, the head’s integrated 600-watt class D power amp is also ready to unleash the fury on stage.

An ultra-flexible powerhouse for tone-chasers with pro aspirations

The Kemper Profiling Amplifier PowerHead has compact dimensions and is ready for whatever challenges are in store, so there can be no doubt that this is a thoroughly professional piece of equipment. Fans of old vintage treasures can now harness the sound and characteristics of the originals – which are usually ruinously expensive and often very rare – and shape these to suit their own tastes without having to spend a fortune getting their hands on the real thing first. This powerhouse amp will delight tone-chasers and sound nerds alike with its extensive range of features and win over recording musicians with its impressive connectivity, which allows it to replace numerous guitar amps in the studio and ultimately save everyone a large amount of time and effort when it comes to cabling and miking.

German firm Kemper Amps, or rather its founder Christoph Kemper, is no stranger to the music industry. His very first product, the virtual-analogue Access Virus synthesizer, was far ahead of its time and brought the company both unexpected success and an impressive reputation within the music profession. Continuing the momentum of this success, the company then developed the “Profiler” technology, which allows an astonishingly realistic reproduction of the sound of a miked amplifier to be made and thus represents the dawn of a new era in digital amplifier simulation. This technology is currently available in different variants of the Kemper Profiler system: As a basic head, as a top with a powerful Class-D power amp integrated, as a rack-mountable unit, and even as a floorboard.

The Profiler is up for anything

Whether it’s right next to the mixing desk in your studio rig, on stage with 600 watts of pure power behind it from the integrated class D power amp, or in your living room for some quiet practice, the Kemper Profiling Amplifier PowerHead’s outstanding flexibility means that the amp’s potential knows no limits other than those of the player’s imagination. The wide range of connection options include on-board digital interfaces, such as an S/PDIF input and output and two USB outputs, which make it easy to record the Profiling Amplifier PowerHead’s signal to a DAW with zero loss in the studio. The Kemper Profiling Amplifier PowerHead comes with presets of many of the best amplifiers of all time already installed, however, so your quest for the perfect tone can begin right away.

The ideal accessory: The Kemper Remote 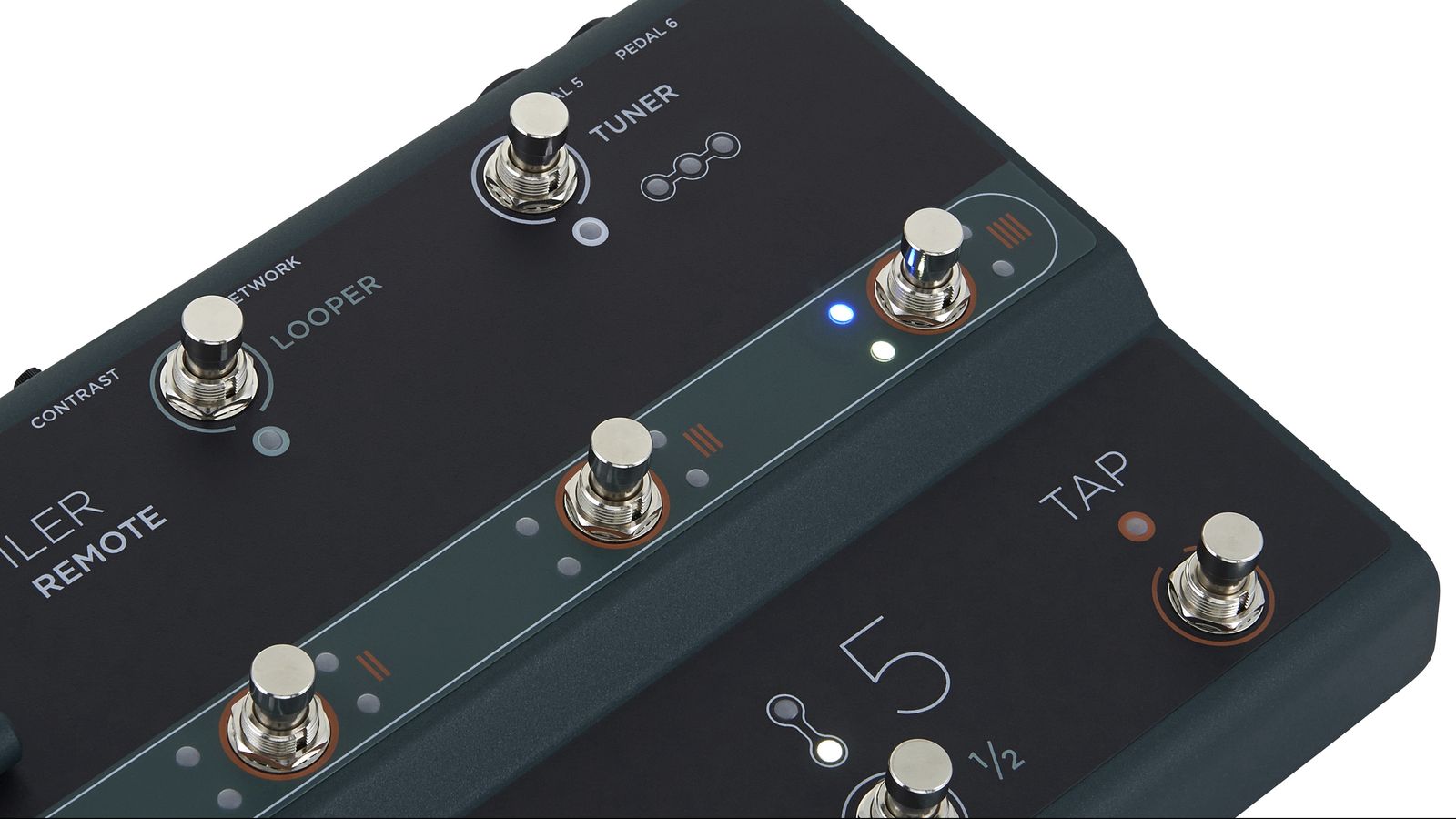 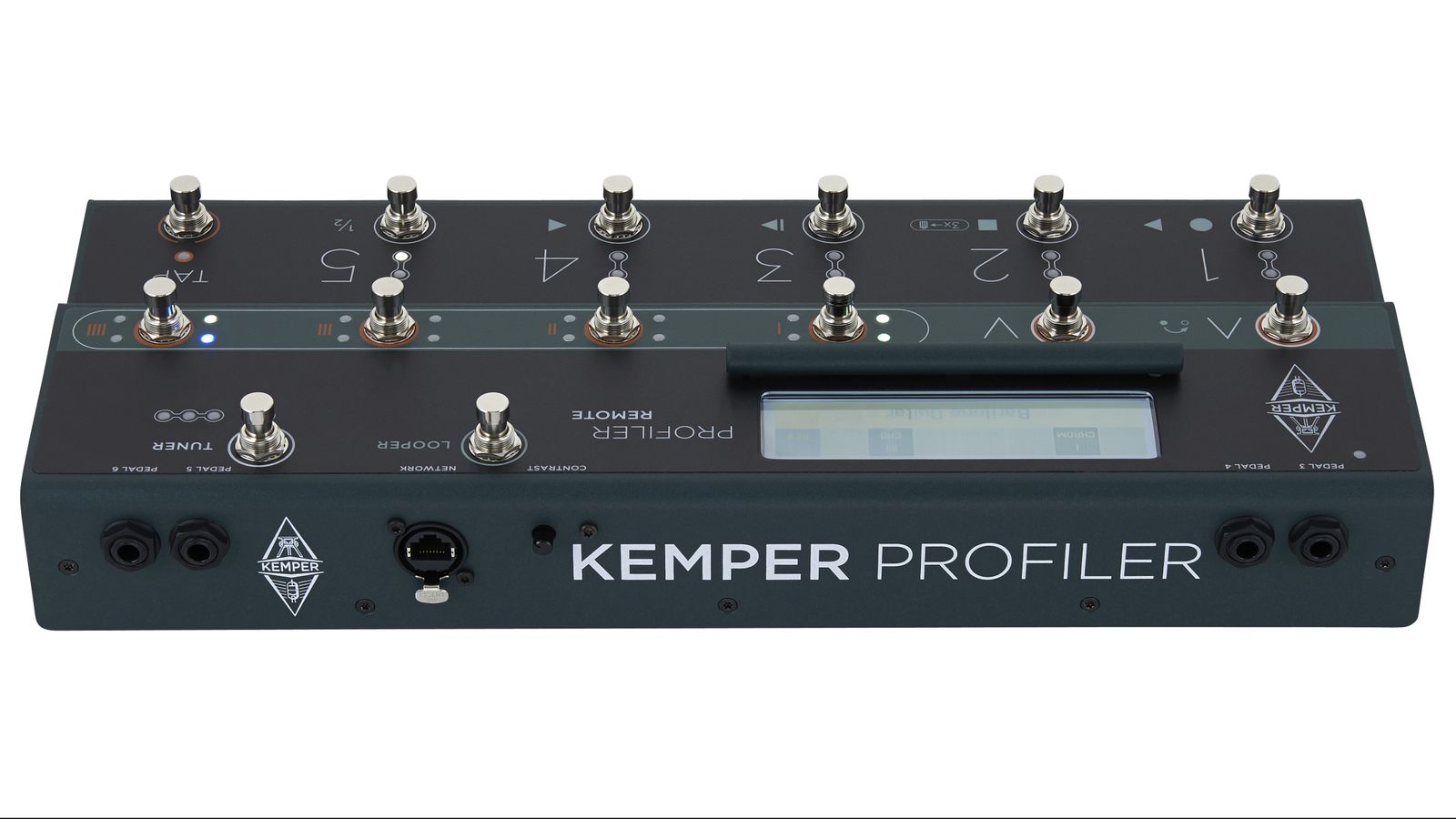 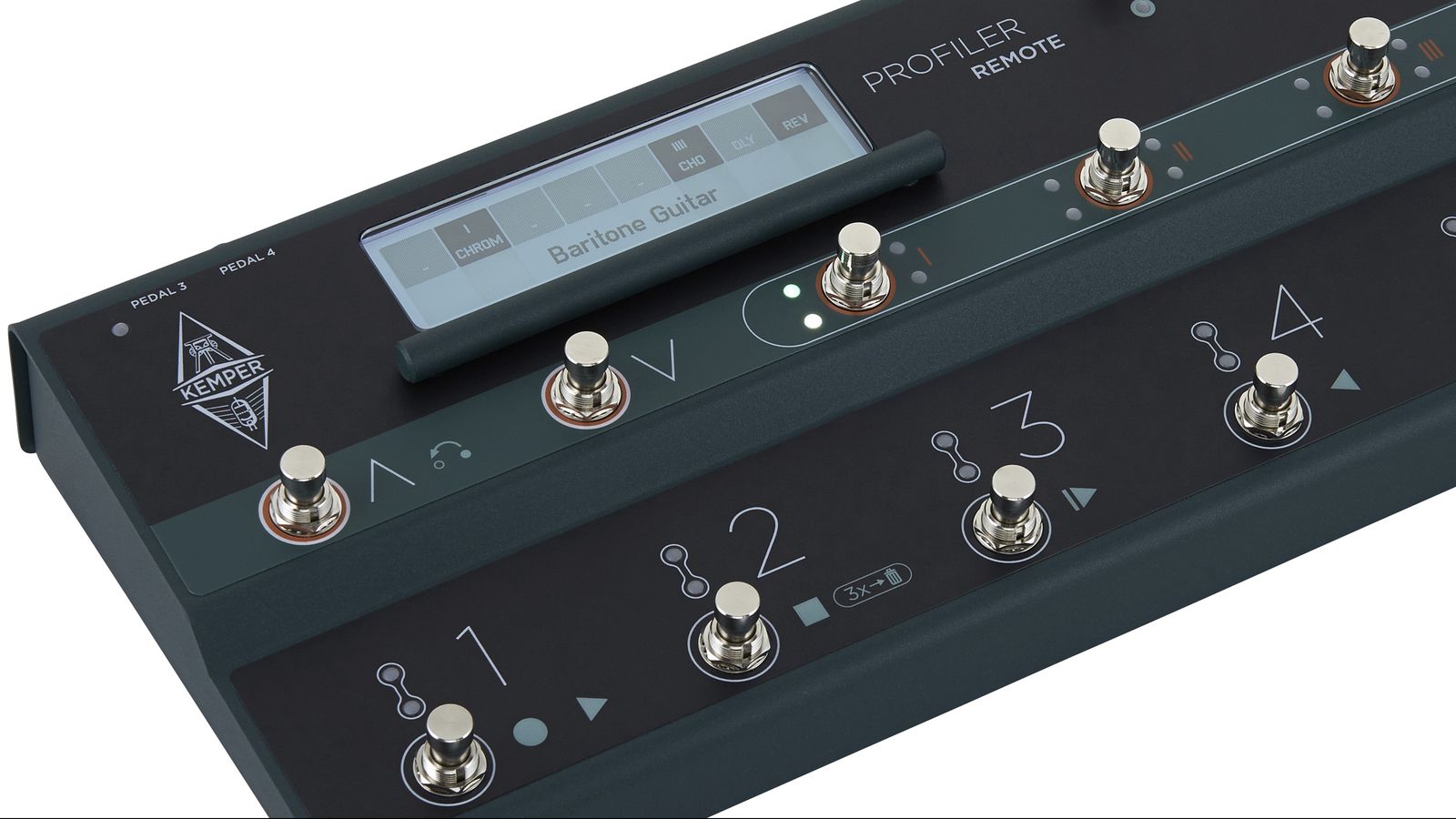 The Kemper Profiler Remote is a floorboard that is compatible with every amp in the Profiling series and can be used to remotely control and enhance all of the Kemper’s key functions, making it the perfect addition to any setup. It features a built-in tuner, four connections for expression pedals, and a large display that provides a clear overview of the presets and effects that are currently selected. What is more, the remote can also be used to control the Profiling Amplifier’s looper function, and its “Morph” function is a highly practical feature that can be used to seamlessly crossfade between one or more parameters – making the transition from a dry crunch to a lead sound with delay as simple as pressing a footswitch, for example. 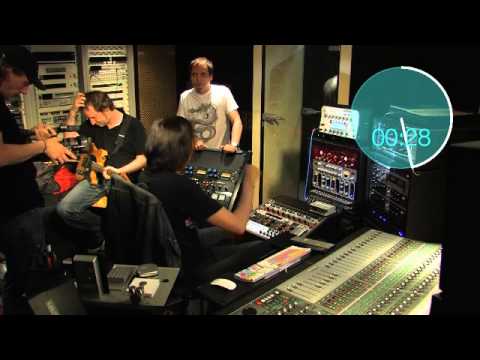 In the spotlight: Profiling

In fundamental terms, the Kemper Profiler is primarily a highly specialised measuring device which, by means of a complicated algorithm, is capable of precisely replicating the tonal characteristics of a signal chain. Generally, this chain first and foremost includes the amplifier that is to be emulated, the cabinet to which this is connected, and the microphone that is placed in front of it. This standard setup can additionally be expanded by adding pedals, which can also be profiled as part of the chain if desired. An “amp only” profile can of course be created, however, by connecting the amplifier to a DI box instead of a conventional speaker cabinet. To determine the characteristics of the individual signal chain, the Kemper then sends various measurement signals through the amplifier that is connected, on the basis of which it then creates a so-called “profile” – which even professional musicians have difficulty in distinguishing from the original in terms of sound and dynamics. The user can subsequently customise this profile by fine-tuning a range of different parameters before naming and saving it. In this way, players can archive their entire amplifier collection virtually without restriction and take it with them to gigs and into the studio.

GO
My mind is blown Greg O. 24.06.2013
I have had the Kemper Powerhead for just under a week and already I am selling my Engl Powerball, Diezel and TC Electronic G System.

I have profiled them, tweaked them within the Kemper itself, taken it to practice and simply amazed the rest of the band with the sound coming out of this beautiful little toaster.

I have good ears and a high end studio at home and have listened critically to the results of my profiling and it is stunning. This really is the best thing I have ever bought.

My flight rig is a Kemper and a midi-moose...that's it. Kemper in the Thon flightcase is about 11kg...so that's pretty much hand luggage, even with the budget airlines.

FOH will be straight out of the Kemper and use foldback to monitor or for smaller venues use the built in power amp to run a cab and mic as normal.

I had the volume on 7 running into 16 ohms and it was as loud as my Engl's on about 6...so no problems for volume. The noise gate is superb and there wasn't any difference in playing style needed to compensate, it was just perfect.

Truly magnificent...if you buy it you will not be disappointed.
handling
features
sound
quality
6
1
Report

d
Great product! demonik 26.02.2020
An excellent product to use for playing live or at home or for recording. It does sound a bit digital if you apply changes to the tone a lot but still contains the original sound really well.

And the effects are excellent! I did not expect them to be this good.

However, tube amps will always be tube amps. There is something about them that cannot be digitally reproduced.
handling
features
sound
quality
0
0
Report

N
Best amplifier you can buy today Nikos.b 01.05.2016
At first, I wasn't sure what the Kemper would come out to be. I spent a good month researching and reading threads, watching videos, reading reviews, until I finally decided to pull the trigger.

1. Thomann took one week to deliver the Kemper (along with 6 other products) from Germany to Qatar, which is pretty fast for an international order. The product was very well packed.

2. Out of the box, the Kemper comes with tons of factory rigs, some of which are great and others not too bad. This is subjective to each one's ears.

3. The Kemper is an amazing piece of gear. You can spend hours tweaking a profile and you will never run out of options. The Rig Exchange is filled with free profiles and there are paid profiles which sound amazing.

4. The headphone out is the best option in the Kemper as you can practice at home without disturbing your neighbors.

5. You can easily record at home with a decent sound card. You can also do reamping which is the ability to modify your rig after you have already recorded through the DAW.

D
Best piece of gear I have owned DeepPurpleInRock 31.07.2020
This is without a doubt the best piece of gear I have owned. It sounds like a tube amp (95% like a tube amp) and it's so smooth to use. The user interface is so easy to understand. I record my instrumentals with S/PDIF and the sound is top quaility. Just make sure that you find yourself some good profiles, there are plenty profiles out there to discover. It is a bit expensive but man it was worth every coin. A great product from Kemper!
handling
features
sound
quality
0
0
Report