This guitar is a suprise in the shape of a parlor guitar.

-The whole guitar is in the shape of the old parlor/country cowboy guitars, so its nowhere near the good ol' dreadnought, so getting used to it is a must. But if you put a strap around it, then all your problems are solved and you will find no problen holding it.

- The fretboard is great, the frets themselves dont stick out on the sides and going up and down the fretboard is extremely comfortable. The roseacer wood feels great! Yet again Hartley Benton suprised me.

-The tuners themselves are standard tuners that do their jobs well and are built sturdy and good. You can change them if you dont like them but i didnt see the need for that since they are good.

-The bridge is well built and is shaped in such a way that it feels natural when you are strumming your guitar.

-The body is well built and it resonates sound well and even.

-The sound suprises you, because you expect it to be high as the body is so slim, but its full and loud and its suprises listeners because they never expect a full body acoustic sound out of such a guitar! Amazing

So do you want to sit by a campfire under the starry night and pretend youre an outlaw country legend like Willie Nelson, Waylon Jennings or Johnny Cash? Or even if you feel the Mississippi delta blues of Robert Johnson? Well even if you want to be that person at a party who always picks up a guitar and goes "anyways, heres wonderwall)", or even if youre chilling in your home during this uncertain times and you need some good ol' acoustic music in your life, well then this is the ideal guitar for you!

This is my second Harley Benton guitar and i plan to expand that number for sure!
Helpful · Not helpful · Report
Report rating…

Send report
features sound quality
Probably best value for a guitar of this type.
T. Escobedo, 02.06.2019
Playable out of the box, this instrument exceeded my expectations regarding sound, playability, and construction. For the cost of about $55 USD, the instrument is built reasonably well. No glaring sloppiness issues, the most significant problem is the fret ends having some sharp edges. Cosmetically, the side dots on the fingerboard binding are s little sloppy at the 12th fret. That's about it. While playable out of the box, it can really be improved if one is willing to put in the effort of tuning up the action and intonation at the nut and saddle. I ended up filing the nut slots a bit, lowering the saddle mostly on the bass side about 1mm, and tweaking the truss rod to add a little relief, to make for a beautiful player. The tuners are nice, without noticeable backlash. The sound surprised me. I was expecting a very tinny tone, considering the soundbox is about the size of a tenor ukulele. But it's quite tolerable and sweet in tone, much more so than, say a Martin Backpacker. Curiously, the tone improves if you can manage to play with the back of the soundbox free from resting on your body, allowing the back to resonate as well as the top. While this isn't necessarily a practical way to play all the time, it indicates the capability of the tiny sized body. The instrument as delivered differs a bit from the one in the description. First, the scale length is about 1cm shorter than the stated 595mm. It has 21 frets rather than the stated 18. And it came with strings from 0.012"-0.053", significantly heavier than I was expecting, but in a good way. The heel of the neck isn't as chunky as the one in the photos. The only improvements I would suggest to Thomann would be aesthetic. The herringbone soundboard "inlay" decal could be eliminated or substituted with a laser cut design. And the neck binding seems like it could be eliminated without sacrificing any quality, and be cost effective, too. Seems strange that they bother on such an inexpensive instrument. But other than that, I'm really enjoying the Traveler, and it proves impressive for an instrument of this size and price.
Helpful · Not helpful · Report
Report rating…

Send report
features sound quality
Pleased with the sound
23.12.2014
I am really pleased with the sound also the playability. I had Washburn Rover travel guitar, steel string version, and the sound was really terrible and almost impossible to play without without the guitar strap.

Though I already have a Washburn Rover Nylon string version, and also I bought this low grade version, I am thinking of paying more and get the electro version.

It's a pity that I bought the low grade version because after inspection I have seen the defects. One of the major defect is the significant 'cut' on the 6th string fret.Though there is no buzzing but unfortunately there is really bad buzzing on the 1st string 2nd fret.

Despite the defects, I love this this guitar and it is going to be with me for years to come.

One thing which I did not expect to get- guitar carrying case. I was not expecting to get one because I had made an enquiry about this guitar and was told the guitar did not come with the bag.

Over all highly recommended to those people who wish to purchase it.
Helpful · Not helpful · Report
Report rating…

Send report
features sound quality
Very practical and well priced
tmac, 23.11.2020
This is a great little guitar, essentially a modern take on the parlour guitar. Like those, it sounds a touch boxy strummed (I think it adds character!) but brilliant for fingerpicking.

As with almost all of my Harley Bentons, it arrived from Germany to the UK still mostly in tune, and it holds tuning well. The action is a touch high - I intend to sand down the saddle when I next change the strings (although I've grown to quite like the action and how it changes my playing!) Its size is perfect for always having it down by the side of the sofa.

If you want a convenient, good quality guitar I can recommend this one, especially if you are fingerpicking/considering the parlour type sound.
Helpful · Not helpful · Report
Report rating…

Acoustic Guitars
The steel-strung acoustic guitar has a range of sounds that are unmistakeable and not easily replicated with any other type of guitar.
Interesting Accessories 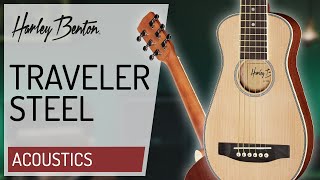 Show all
Acoustic Guitars
The steel-strung acoustic guitar has a range of sounds that are unmistakeable and not easily replicated with any other type of guitar.
test results:
Read review