For a long time now, Harley Benton instruments have been known for their high quality and extremely affordable prices. The TE-90FLT Blue Blast is no exception: Tt combines a classic design with exotic woods and a set of FilterTron-style humbuckers, resulting in its powerfully rocking sound. With its Blue Blast finish, the guitar is also a real eye-catcher both on stage and in the living room. In addition, its slim Canadian maple neck allows for comfortable playability, while solid Kluson-style machine heads and a Graph Tech nut ensure optimum tuning and intonation along the entire length of the roasted sungkai fingerboard. 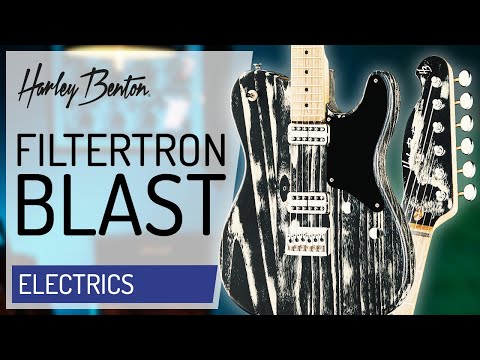 The exotic tonewood ("sungkai") used for the body of the TE-90FLT is an interesting alternative to the woods usually chosen for TE-style guitars. The vibrational behaviour of the wood is supported by the chambers in the body, which on the one hand reduce weight and on the other hand enhance sustain and resonance. The fingerboard with 22 frets, which is also made of sungkai, is set on a neck made of Canadian maple. The heat treatment not only makes it look attractive, but also has a positive effect on the instrument's robustness and tonal behaviour. The two vintage-style FilterTron pickups are also great for rocking the house: Thanks to their ample headroom, they offer a rich sound ranging from silky smooth to rough.

A rocking TE-style guitar at an affordable price

Thanks to the affordable price typical for Harley Benton, the TE-90FLT can be a real catch for all fans of the TE design, who can now get their hands on this classic single-cut instrument while keeping an eye on their budget. Something to note, however, is that instead of the famous "twang" for which this type of electric guitar is perhaps best known, the two Roswell FilterTron humbuckers result in a genuine Rock guitar that covers genres like Blues all the way to Hard Rock. At the same time, the TE-90FLT makes a convincing case with its comfortable playability, enhanced even further by its astonishingly light weight thanks to the chambered body, which will make for downright effortless performances and a lot of pleasure.

Since 1998, the Harley Benton brand has been catering for the needs of numerous guitarists and bassists. In addition to an extensive range of stringed instruments, Thomann's house brand also offers a wide choice of amplifiers, speakers, effect pedals, and other accessories. In total, the range includes over 1,500 products. Built by established names in the industry, all Harley Benton products combine quality and reliability at attractive and affordable prices. The continuous expansion of the range ensures that Harley Benton always provides new, exciting, and innovative products that keep players perfectly in tune with the musical world, day after day.

If you're looking for a TE-style guitar for tame Country and Western, you'd better consider another instrument. With its Blast finish and reversed headstock in a matched design, it's evident at first glance that the Harley Benton TE-90FLT is firmly at home in Rock genres. Its sound matches its appearance in every way: Here, all tonal facets from crunch to high-gain, are catered for. The two Roswell FilterTron-style pickups deliver a punchy and at the same time precisely defined sound, while the slim C-profile of the maple neck provides the best basis for easy playability, especially for beginners.

m
Can't buy better for the money mropeel 16.10.2020
I recently purchased this guitar, primarily because I've never had a guitar with filter tron pickups. I do have another 3 Harley Benton guitars however, a Fusion 1, a Fusion 2 and a DC Junior. Whilst my Fusions have been modified with GK3 synth pickups, primarily for LIVE use , this was a purchase specifically intended for use in the studio.

None of my HBs have had any fret issues. All totally level and tall enough to get a good grip of the strings. This guitar is no different. Probably the straightest neck I have seen on a 200€ guitar. Yes it's contour is very flat but that's good for low actions, string bending and I like that. The neck is 'fast' and feels quality and comfortable in the hand. The nut is also perfectly cut , as it was on my other HBs ..... and sound wise it has a nice smooth chime to it. Not overly bright but with more 'jangle' than a standard humbucker. Very useable.

It is however quite heavy even although it is chambered under the scratchplate and has an overly massive control cavity. I personally would have liked the body finish to match the headstock as the colours on the body aren't as vivid as the headstock. I understand that the headstock is a veneer and probably difficult to match up. I can live with it. It's close. I would have liked the option of a trem, but again I can live with a fixed bridge for the studio.

So, out of the box, the action was a little high but after a quick adjustment, it now plays like a dream. I absolutely love it. Even if you are not a big Telecaster style player, this is a great addition to your sound arsenal. When you realise that the closest alternative available from the big American guitar company is around 1600€ , this is a bargain.
features
sound
quality
2
0
Report

T
Harley Benton TE-90FLT Blue Blast TrashPanda 27.10.2020
First thing to note is one of the screws that keeps the tuner in place was loose, when I tried to tighten it - it broke on the spot so the tuning machine is holding up with prayers only now.

Another thing to note is the finish looks painted-on and not actual wood, which you may be tricked into believing by your eyes.

And the last con i can find is the weight, while still lighter than an LP, it's pretty heavy and most of the weight is in the body, keeping it from neckdiving for sure.

When it comes to good things. The fretboard seems legit, the frets aren't sticking out much, the bridge seems solid. The sound is great, especially for this price range.

Overall if you're looking for a cheap guitar (add price of changing tuners to something else cause they're awful) it's a great choice.
features
sound
quality
2
2
Report

B
My first HB, instant love! Blippo 01.08.2021
This guitar is my go to for doing ambient. I even have a heavily modified Epiphone Les Paul Standard with splittable Seymour Duncan's that sounds amazing, but the handling of this guitar and the good sounding low output humbuckers, rounded but not dark, makes me always prefer it to my "more expensive" guitar. I bought it along with a Sterling Albert Lee, and I ended up returning the Sterling and keeping the HB. If I could swap a thing from the Sterling, was the 9,5" radius roasted maple neck, that was a breeze to play. Hey Harley Benton! Please do some more rounded fretboards please!!!
features
sound
quality
1
0
Report

r
The best guitar I've ever played (for this price) robsth 08.02.2022
I'll be brief.
Despite the fact that the guitar came to me with a broken tone switcher I completely enjoy playing it and looking at it. It feels great, it sounds awesome (clean, crunch and even distortion) and looks decent.
features
sound
quality
0
0
Report