handling features sound quality
Excellent choice... Yet not for a phaser
Carnivore, 17.02.2020
This is part of Fender new line of effects, all of which seem uber cool and feature packed. I decided to add this phaser to the many I already have (MXR, EH, Boss, even some obscure ones from the 80s and early 90s) and I was very surprised with which I found. The effect is really classy, rich and full, no question, but is certainly not a phaser in the traditional sense.

Instead and in comparison, is way too subtle, probably sitting between a pulsing univibe (!?!?!) and a mild, chorusy phaser, being unable to offer some traditional tones (jet engine swooshes, for instance) usual in almost every other unit in the market. No doubt in my mind that you will still keep your Phase 90, 100, 95, Small Stone or whatever in your board, since this one will not replace any of them. Without prejudice, it will add another flavour to your existing tones, one that is really usable and pleasant. Even when I was in the market for a phaser and this does not seem to be, I keep no regrets.

In a nutshell, this is a single unit with two separate phaser speeds that you can set to taste with Leslie-style ramping from one to the other. In addition, you get switchable 4-stage and 8-stage phasing, two different wave shapes. The real highlight here is a sensitivity control that lets the modulation speed respond to the level of the incoming signal hence adapting to your playing, something that sets this unit apart to most competitors. As said, this is really usable and effective, in particular when you can follow the changes not only in sound, but visually as well with its dedicated LED. Yes. This pedal has a million LEDs. But more on that below.

Built like a tank a with features aplenty (elegant brushed-aluminium enclosure with bright built in LEDs in the control knobs (great to see at a glance where you are, even when they can annoy if you are not in a stage situation) you will discover that lots of planning went on here (for instance that the LEDs can be switched off if you do not need them). For those who use pedals off board, note that this does’t have, however battery compartment. Main-powered only. But no worries, since zero noise added (this is a true bypass unit BTW). And the features do not stop here, there is also a 3dB boost switch on the back to compensate volume drops. All you might need had been taken care beforehand here (with the arguably exception to traditional phasing).

Pros? As said, the sound is lush and full, and combined particularly well with crunch tones and distortion, considering that is not overly present. A great solid pedal offering useful and elegant sounds.

Cons? Probably marketing. Labelling this unit as a phaser is inaccurate and misleading, since even when is on paper true, you will not find anything you might expect from a traditional phaser here.

Without prejudice, if you approach this one with an open mind and like what you hear (which you most probably will) the Lost Highway (Phaser?) will not disappoint a single bit.
Helpful · Not helpful · Report
Report rating… 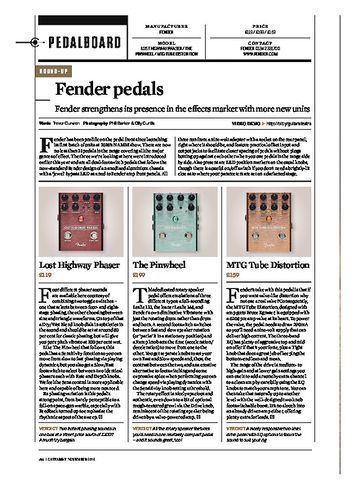