the result is, to all extent, a proper Fireball mk2, just in 25W format.

very much like its bigger 100 W brother, the Fireball 25 is a very straightforward 2 channel amplifier, with controls for clean and a lead gain, a shared 3 band EQ, presence and (unlike the FB100) a single master volume, with a footswitchable master volume boost to give it that extra punch for solos.
the clean channel lacks the bright control (that means it lacks the option to turn it off) and the depth boost (a feature i always found completely overkill on the already bass heavy FB100).
it keeps the footswitchable mid boost (sadly it seems to act mainly in the lower midrange, and the FB doesn't lack mids, so i rarely use it), the noise gate and a footswitchable fx loop (a feature i really love in ENGLs, i wish all amps had it...)

an exclusive feature of the 25W version (taken directly from the 20W ironball) is the power soak, with 3 steps (full, half, low) and the option to turn the power amp off, using the line output.

soundwise it's very, very similar to the full power Fireball - i found it lacks just a bit of gain, compared to my FB100 - but we're talking about A LOT of available gain nonetheless!
too bad the red LEDs are missing...

now, if anyone has doubts about its live useability, 25W are more than enough for any kind of gig, assuming there's some kind of stage amplification. otherwise i'd reccomend it for smaller venues, to avoid pushing it to the point of losing headroom and clarity.
Helpful · Not helpful · Report
Report rating… 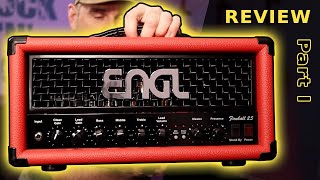